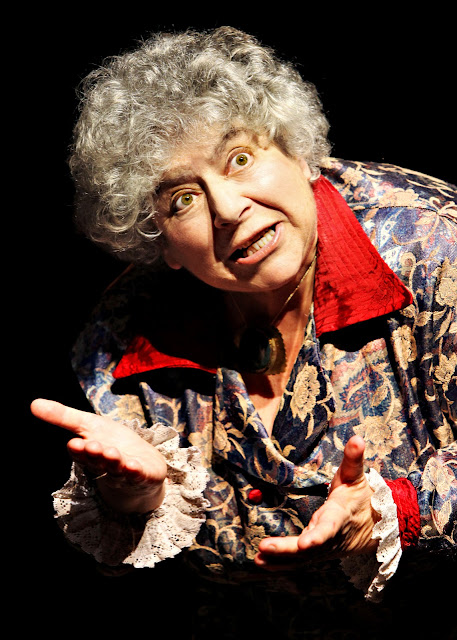 Miriam Margolyes is a talented character actor and a colorful character in her own right.   Her mannerisms, facial expressions, and characterizations truly bring Dickens' women off the pages and into our imaginations in all their quirky glory.   She is a master at her craft and a true joy to see in action, as she shades and nuances Dickens' characters, who still live on 200 years after his birth.   We also adored her running commentary and backstory on the real life women who inspired Dickens fictional females.   From dwarf hairdressers to debutants and victorian cougars, Margolyes' characters and hilarious, heartfelt and entirely endearing. 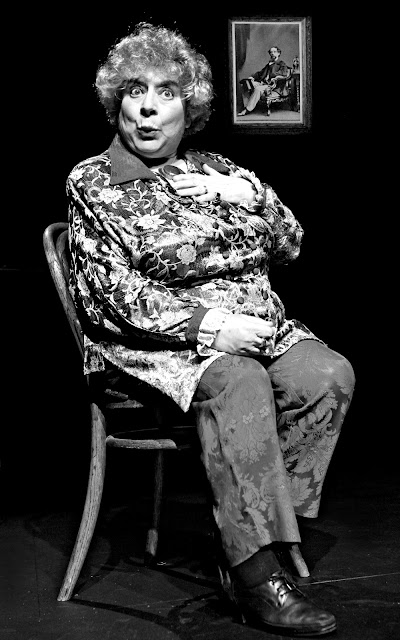 Her final show is tonight, December 22, at 8pm and we highly recommend you catch it.   This is not just her final show in Chicago, but the last time she'll be performing this show for the foreseeable future.   If you just can't swing it, she has written the script in book form with extra goodies like photographs and characters she had to cut from the show.   Check it out here.

Posted by Bonnie Kenaz-Mara at 6:46 PM No comments:

Spend an evening being schooled in Dickens by Professor Sprout in the flesh!   There are only 3 shows left in Chicago and Saturday's 3pm is SOLD OUT.   Get your tickets now.   This may be the season of Scrooge, but you can celebrate the bicentennial of Charles Dickens' birth in style, with Dickens' Women.

Miriam Margolyes is recognized for the iconic role of Professor Sprout in the Harry Potter films, The Nurse in Baz Luhrmann’s Romeo + Juliet, and Mrs. Mingott in Martin Scorsese's The Age of Innocence for which she won a British Academy of Film and Television Arts (BAFTA) Award. Margolyes brings to the stage 23 of Dickens’ best-loved characters—from doe-eyed young heroines to brow-beating old harridans—as she sets out to discover Charles Dickens himself.

Chicago Shakespeare Theater
Joins International Dickens 2012 Celebration
Marking Bicentennial of Charles Dickens' Birth
With World’s Stage Presentation of
Dickens’ Women
Featuring Miriam Margolyes
Recognized for Her Screen Roles in
Harry Potter, Romeo + Juliet and The Age of Innocence
December 18–22, 2012
Chicago Shakespeare Theater (CST) joins the international celebration of the bicentennial of Charles Dickens’ birth, Dickens 2012, with a World’s Stage presentation of the Olivier Award-nominated production Dickens’ Women, featuring actress Miriam Margolyes, December 18–22, 2012 in the theater Upstairs at Chicago Shakespeare.
The year-long international celebration of the life and work of Charles Dickens, Dickens 2012, marks the bicentennial of his birth. Chicago Shakespeare Theater joins institutions and organizations from around the globe that have created programs, events and activities to commemorate this special anniversary. Charles Dickens remains a massive contemporary influence throughout the world and his writings have inspired more than 180 motion pictures and TV adaptations.
Miriam Margolyes has acted in over 100 films and television productions, including her multiple appearances in the British sitcom Blackadder. In addition to her screen credits, Margolyes created the role of Madame Morrible in the London stage production of Wicked, which she reprised on Broadway. She also starred as Nell in Theatre du Complicite’s West End production of Samuel Beckett’s Endgame, for which she won a What’s On Stage Award for Best Supporting Actress. Margolyes will soon be seen with Barbra Streisand and Seth Rogan in the film The Guilt Trip, scheduled for release in December 2012.
Margolyes originally developed Dickens’ Women with co-writer and director Sonia Fraser for the Edinburgh Fringe Festival in 1989. The production pays homage to some of English literature’s most iconic women, including Mrs. Micawber from David Copperfield, Miss Havisham in Great Expectations and the grotesque Mrs. Gamp from Martin Chuzzlewit. Dickens’ Women offers an intimate evening of indelible characters, revealing everything from the raucous humor of Dickens’ characterizations to the darker, more sinister aspects of his life and work.
Dickens’ Women has been performed at Festivals around the world, including Edinburgh, London, Sydney, Jerusalem, Santa Cruz, New York City, Boston, and all over India. As part of the Dickens 2012 celebration, Margolyes embarked on an international tour to Australia, New Zealand, Canada, Hong Kong, the UK and the United States, receiving international acclaim for the production. The Guardian raves, “A virtuoso display… Margolyes’ genius is to entertain, fascinate and challenge.” The Sydney Morning Herald declares: “Margolyes conveys her enthusiasm for and knowledge of Dickens with the lightest of touches” and The Telegraph proclaims Dickens’ Women “remains a masterclass not only in acting, but in the power of literature.”

ABOUT CHICAGO SHAKESPEARE THEATER
Chicago Shakespeare Theater is a leading international theater company, known for vibrant productions that reflect Shakespeare’s genius for intricate storytelling, musicality of language and depth of feeling for the human condition. Recipient of the 2008 Regional Theatre Tony Award, Chicago Shakespeare’s work has been recognized internationally with three of London’s prestigious Laurence Olivier Awards, and by the Chicago theater community with 70 Joseph Jefferson Awards for Artistic Excellence. Under the leadership of Artistic Director Barbara Gaines and Executive Director Criss Henderson, CST is dedicated to producing extraordinary classic productions, new works and family fare; unlocking Shakespeare’s work for educators and students; and serving as Chicago’s cultural ambassador through its World’s Stage Series.
ABOUT THE WORLD’S STAGE SERIES
Chicago Shakespeare’s presentation of Dickens' Women is emblematic of the wide scope of work presented through the World’s Stage Series—a program that brings the world’s most exciting theatrical events to Chicago audiences and presents Chicago Shakespeare’s work abroad. Since the inception of the World Stage Series in 2000, CST has imported international productions ranging from pedestrian-based live art events (Australia’s one step at a time like this) to grand aerial and water spectacles (France’s Compagnie Transe Express and Ilotopie); to iconic theaters such as Shakespeare’s Globe Theatre (London), the Maly Drama Theatre (St. Petersburg) and La Comédie-Française (Paris). As a leading cultural ambassador, Chicago Shakespeare has presented its work at the Royal Shakespeare Company (Stratford-upon-Avon), The Donmar Warehouse (London), and on tour in Germany and Australia. This past spring, CST was among the 37 international companies that came together for an unprecedented 37-play “Globe to Globe” festival for the London 2012 Cultural Olympiad.
Posted by Bonnie Kenaz-Mara at 1:33 PM No comments: