ACT OUT: OPENING-FISH MEN AT GOODMAN 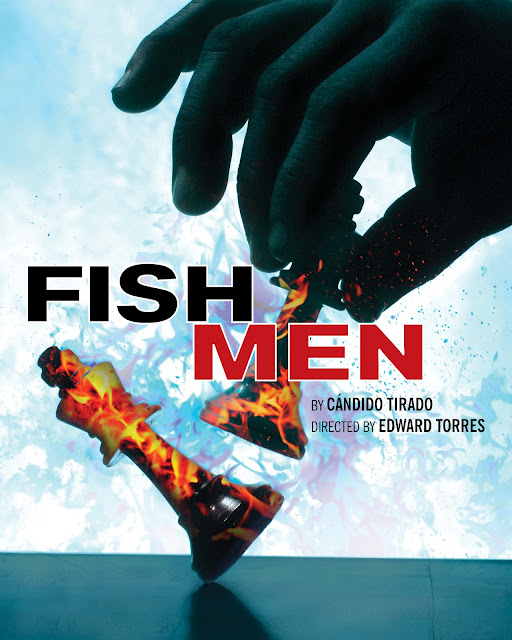 HIGH STAKES GAME OF URBAN CHESS HUSTLERS ON THE HOOK FOR FISH MEN BY CÁNDIDO TIRADO, PREMIERING AT GOODMAN THEATRE

****EDWARD TORRES MAKES HIS GOODMAN DIRECTORIAL DEBUT WITH THIS TEATRO VISTA COLLABORATION, THE SECOND OF THREE NEW WORKS BY LATINO PLAYWRIGHTS, APRIL 7 – MAY 6, 2012***

Fish Men runs April 7 – May 6, 2012 (Previews start today.  Opening Night is April 16.) in the Goodman’s Owen Theatre. Tickets ($12-$42; prices subject to change) can be purchased at GoodmanTheatre.org by phone at 312.443.3800 or at the box office (170 N. Dearborn). Sara Lee Foundation is the Owen Season Sponsor. Baxter and Blue Cross Blue Shield are Contributing Sponsors and Hoy is the Spanish Print Media Sponsor.

Cándido Tirado, Teatro Vista’s newest resident playwright and a highly-rated chess master by the United States Chess Federation, explains, “When I graduated from college, I decided I wanted to combine two great loves of my life: writing plays and playing chess. But it wasn’t until 2000, as I was walking by the chess tables in New York’s Washington Square Park, that the play suddenly revealed itself to me. Outwardly, Fish Men deals with the cruel art of the ‘chess hustle’—but underneath it is an exploration of man’s inhumanity towards his fellow man. I am thrilled to premiere this play in Chicago, with Teatro Vista and Goodman Theatre.”

Fish Men plays out in real time on a hot summer day in New York City’s Washington Square Park, where Rey Reyes (Raul Castillo), a survivor of the Guatemalan genocide who is going through his own personal hell, gets snared by a group of chess hustlers. Ninety Two (Howard Witt), a Holocaust survivor, tries to intervene, exposing Rey’s need for vengeance. As the game progresses, the circumstances that stoke the fire of each player’s obsession with the game and their inner demons are revealed. Fish Men features a multi-ethnic, multi-generational ensemble cast including Raul Castillo as Rey Reyes, Dan Cantor as Stuart, Howard Witt as Ninety Two, Cedric Mays as Cash, Ricardo Gutierrez as Jerome, Kenn E. Head as Pee Wee, Ben Chang as Dr. Lee and Mike Cherry as John. The creative team is set designer Collette Pollard, costume designer Christine Pascual, lighting designer Jesse Klug and sound designer Mikhail Fiksel.

“Fish Men is an ideal project for Teatro Vista and the Goodman,” says Edward Torres, artistic director of Teatro Vista. “Together, we are exploring the cultural intersections of our communities through ourcollaborative development of new plays by Latino writers. While Cándido’s work comes from the Latino perspective, with the multi-cultural, multi-generational cast of Fish Men, we have the opportunity to share with a large and appreciative audience what we have in common as people. This play is special and Chicago audiences are in for a real treat.”

Cándido Tirado (Playwright) is a New York-based playwright. His play Momma’s Boyz, produced by Teatro Vista earlier this season, was chosen a “Chicago Top Ten in 2011” by the Huffington Post. His off-Broadway productions include Celia: The Life and Music of Celia Cruz (co-written with Carmen Rivera) which premiered at New World Stages and was also performed in Chicago’s Athenaeum Theater, Las Bellas Artes in Santurce, Puerto Rico, Tenerife and Miami; King Without a Castle; Checking Out; First Class (Puerto Rican Traveling Theater); The Barber Shop and Momma’s Boyz (Repertorio Español). Other productions include The Missteps of a Salsa Dancer, From Dating to Death in Five Easy Steps, Ilka: The Dream, Hands of Stone, King Without a Castle (also workshopped at Sundance Theater Lab); Some People Have All The Luck, produced at the National Theater of the Dominican Republic and New York; Heart Stopping Sex, produced by Soho Rep, and The Kid Next Door, Hey There Black Cat, Abuelo, The Missing Colors of the Rainbow and Palladium. He co- wrote with Alfredo Bejar the award winning short film Getting to Heaven and was a staff writer for the TV show Ghostwriter where his episode was nominated for a Humanitas Award. His screenplays include Da Bronx, El Casique del Poker and The Milagro Boyz. He’s a four-time winner of the New York Foundation of the Arts Playwriting Fellowship. Publications include First Class, Recent Puerto Rican Theater: Five Plays from New York (Arte Publico); Some People Have All the Luck, Nuestro New York: An Anthology of Puerto Rican Playwrights (Penguin, Mentor Books); Ilka the Dream: Positive/Negative: Women of Color Living with H.I.V. (Aunt Lute Books). Mr. Tirado is a co-founder of Educational Plays Production with his wife Carmen Rivera, which tours public schools presenting plays with social issues concerning youth.

Edward Torres (Director, Teatro Vista Artistic Director) directed the world premiere of Kristoffer Diaz’s The Elaborate Entrance of Chad Deity at Victory Gardens Theater (produced in association with Teatro Vista) which was named Best Play of 2009 by the Chicago Tribune, Chicago Sun-Times and Time Out Chicago, was nominated for the Pulitzer Prize, and earned Jeff awards for Best Production and Best Director. He also directed subsequent productions off Broadway at New York’s Second Stage Theatre (2010 Lucille Lortel Award for Outstanding Play and Obie Award for Best Play), and at the Geffen Playhouse in Los Angeles to critical acclaim. Mr. Torres has produced more than 25 plays as the artistic director of Teatro Vista over the last 12 years. His Teatro Vista directing credits include The Show Host, Jamie Pachino’s Aurora’s Motive, Romulus Linney’s Ambrosio, Edwin Sánchez’s Icarus, Reuben Gonzalez’s The Boiler Room and Karen Zacarías’ The Sins of Sor Juana. Other Chicago directing credits include Amparo Garcia- Crow’s Cocks Have Claws and Wings to Fly and Migdalia Cruz’s Lolita de Lares. As an actor he will be seen in Victory Gardens Theater’s upcoming production of Oedipus El Rey. Most recently he was seen in El Grito del Bronx, a co-production with Collaboraction in association with Goodman Theatre; the Goodman’s production of The Cook; and Teatro Vista’s productions of Massacre (Sing to Your Children) at the Goodman and Elliot, A Soldier’s Fugue with Rivendell Theatre Ensemble as part of the Visiting Company Initiative at Steppenwolf Theatre Company. Other Chicago acting credits include roles at the Goodman, Steppenwolf Theatre Company, Victory Garden Theater, Latino Chicago Theater Company, Court Theatre, Apple Tree Theatre, Chicago Shakespeare Theater and Teatro Vista. He was the recipient of a 2010 3Arts Artist Award, and was featured as guest director at the 2011 Eugene O’Neill National Playwrights Conference. Mr. Torres has a BA in theater from Roosevelt University in Chicago and an MFA in film from Columbia College Chicago. He serves on the Illinois Arts Council, and has served on the National Endowment for the Arts Theater Panel (2005 – 2007) and on the MAP Fund Theatre Panel (2008).

Insider Access is a series of public programs that provides insight into the Goodman’s artistic process. With Artist Encounters, audiences meet the names and faces behind the work on stage, including playwrights and directors.

The Artist Encounter series brings together audiences and the artists who create the work on our stages, in an intimate environment, for a behind-the-scenes look at the plays and the playmaking process. Join us for an intimate conversation with Fish Men playwright Cándido Tirado and director Edward Torres before a 7:30pm performance.

About Teatro Vista
Teatro Vista, Theatre with a View, was founded in 1989. Today, Teatro Vista is celebrating its 22nd season, having grown to be Chicago’s largest non-profit Equity Latino theater company producing full scale, Latino oriented, theatrical productions in English. Just within the last year, Teatro Vista was celebrated as one of 25 of “Chicago’s cultural leaders” by the Arts & Business Council of Chicago, and received the League of Chicago Theatres’ 2011 Artistic Leadership Award.

Teatro Vista is firmly committed to sharing and celebrating the riches of Latino culture with all Chicago theater audiences. This commitment stems from the belief that there are as many similarities between us as there are differences, and that the answer to breaking down the walls of prejudice and stereotypes lies in understanding these differences. Ultimately, it is through this “view” that Teatro Vista bridges the gap between Latino and non-Latino cultures in Chicago.
Teatro Vista is supported in part by Alphawood Foundation, Chicago Community Trust, a CityArts Program grant from the City of Chicago Department of Cultural Affairs, Gaylord and Dorothy Donnelly Foundation, The Richard H. Driehaus Foundation, Hispanics In Philanthropy, Illinois Arts Council, Joyce Foundation, John D. and Catherine T. MacArthur Foundation, National Association of Latino Arts and Culture, and The Shubert Foundation. For more information, visit teatrovista.org 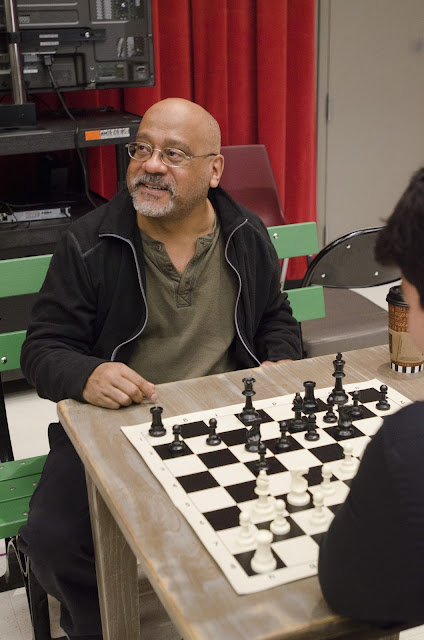 About Goodman Theatre
Currently on stage in the Albert Theatre (ENDING THIS WEEKEND) is Camino Real by Tennessee Williams, directed by Calixto Bieito running through April 8, 2012.

Goodman Theatre, “the leading regional theater in the nation’s most important theater city” (Time), is a major cultural, educational and economic pillar in Chicago, generating nearly $300 million in economic impact over the past decade in its state-of-the-art two-theater complex on North Dearborn Street. Founded in 1925 and currently under the leadership of Artistic Director Robert Falls, “Chicago’s most essential director” (Chicago Tribune), and Executive Director Roche Schulfer, Chicago’s oldest and largest not-for- profit resident theater has welcomed nearly two million patrons to productions and events—including 10 festivals celebrating playwrights such as David Mamet, August Wilson and Horton Foote, as well as the biennial Latino Theatre Festival—and served legions of students through its Education and Community Engagement programs (including the FREE Student Subscription Series and other interactive programs).

The Goodman has earned more than 90 awards for hundreds of productions, including the Pulitzer Prize for Ruined by Lynn Nottage—one of 25 new work Goodman commissions in the last decade. Ruth Ann M. Gillis is the Chairman of Goodman Theatre’s Board of Trustees and Joan Clifford is President of the Women’s Board. American Airlines is the Exclusive Airline of Goodman Theatre. BMO Harris Bank is the Major Production Sponsor of A Christmas Carol, and Aon Corporation is the Corporate Sponsor Partner.