Here at ChiIL Live Shows, we caught Bad Jews' original opening at Theater Wit last spring, and we'll be back again tonight to catch their 5th extension and 3rd home since this production opened on the Chicago scene. If you haven't seen it yet, what are you waiting for? Go already!

Bad Jews is a high energy, fast paced throw down between cousins. These characters are passionate about making a point and nothing is sacred. Religion, wealth, family relations, misogyny and cultural heritage are all ammunition in this hilariously cringe worthy creation. Bad Jews has a wicked wit and surprising depth. Highly recommended.

Nothing brings out the worst in a family like a funeral. Daphna is the most devout Jew in the Feygenbaum family. (Just ask her.) Her cousin Liam is the most deserving first-born. (Just ask him.) Don't ask Liam's brother Jonah anything. In this savagely funny comedy, long standing (and not-so-buried) antipathies boil up in a battle between two cousins over a treasured family heirloom. Stir in the identity curation and you get one of the funniest, wisest, most excruciating plays you'll see this year.

★★★ 1/2 STARS! Savagely fearless, hilarious comedy! It's a perilous arena, these matters of race and appearance, but if people are laughing, there are real opportunities for the fearless. And this hilarious staging of "Bad Jews" grabs its chance and squeezes hard.
Chris Jones, Chicago Tribune [Full review]

★★★★ The most extraordinary acting I’ve seen on a Chicago stage! The audience is sent out of the theater dazzled.
CTR

A stellar piece of emotional bloodsport, courtesy of director Jeremy Wechsler and a game, jugular-slashing cast. But Bad Jews isn’t cheap. It is a heartfelt, almost rabbinical debate about what it means to be Jewish. It’s interested in cultural memory, institutional religion, and the tug-of-war between progress and tradition.
New City 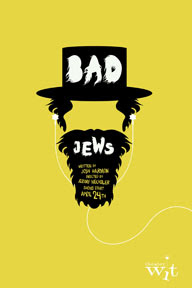