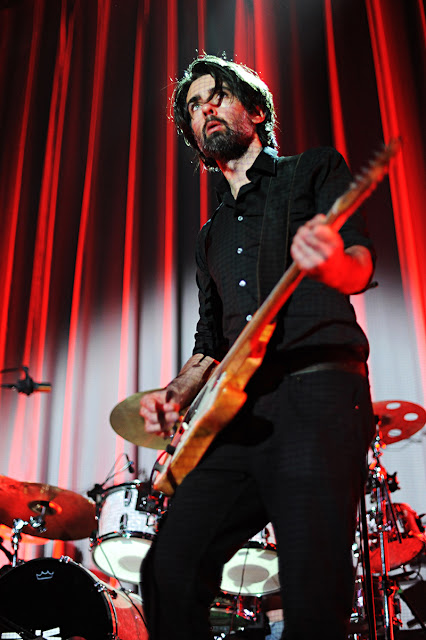 Chicago Shakespeare Theater (CST) and Thalia Hall partner to present a two-night-only concert event from Belgium as part of the yearlong Shakespeare 400 Chicago celebration—Theater Zuidpool’s Macbeth. A dynamic and feverish production bordering between underground opera and rock concert, this Macbeth is a music theater deconstruction of one of Shakespeare’s most recognizable works with an original score in English by two of Belgium’s greatest alternative musicians, Mauro Pawlowski (of dEUS) and Tijs Delbeke(of Sir Yes Sir).

The musicians weave together various rock, folk, alternative and operatic musical styles to create a dialogue between Macbeth and his wife, telling the story of their bloody takeover of the Scottish throne. This wholly unique musical experience is presented at Pilsen’s famed concert venue Thalia Hall, August 21 & 22 at 8:30 p.m. (doors open at 7:30 p.m.).

The visceral rendering of the Bard’s chilling tragedy has entranced music critics and Shakespeare lovers alike. Belgium’s DeMorgen raves “never seen anything like this before...Theater Zuidpool transforms Shakespeare’sMacbeth into an underground-like opera, provocative and modulating with an arsenal of musical genres, and poetry used as a weapon.” Cutting Edge says, “The ensemble brings Shakespeare’s musical poetry to life. ThisMacbeth shows how you can move the boundaries of theatre." De Standaard calls it “a startling Zuidpool-creation... Not often is the dim discomfort of Macbeth so precisely touched upon.”

Shakespeare 400 Chicago is a yearlong international arts festival in 2016 celebrating the vibrancy, relevance and reach of Shakespeare as the world commemorates the four hundred years since the playwright’s death in 1616. Spearheaded by Chicago Shakespeare Theater, the festival unites 60 of the city’s world-class institutions, and welcomes scores of leading artists from nations around the world including Australia, India, Mexico, the United Kingdom and beyond. Events spanning theater, opera, music, dance—even cuisine—celebrate, interpret and reimagine Shakespeare’s work. Shakespeare 400 Chicago will engage more than 500,000 Chicagoans and visitors to our City through 850 events. With leading support from the Julius Frankel Foundation, the John D. and Catherine T. MacArthur Foundation and the Pritzker Military Museum & Library, this quadricentennial celebration is the world’s largest and most comprehensive celebration of Shakespeare’s enduring legacy.

CST is a leading international theater company, known for extraordinary productions; unlocking Shakespeare’s work for educators and students; and serving as Chicago’s cultural ambassador through its World’s Stage Series. Throughout 2016, CST is spearheading the international arts and culture festival, Shakespeare 400 Chicago, a citywide celebration of the playwright’s 400-year legacy. CST serves as a partner in literacy to Chicago Public Schools, working alongside English teachers to help struggling readers connect with Shakespeare in the classroom, and bringing his text to life on stage for 40,000 students every year. And each summer, 30,000 families and audience members of all ages welcome the free Chicago Shakespeare in the Parks tour into their neighborhoods across the far north, west and south sides of the city. Reflecting the global city it calls home, CST is the leading producer of international work in Chicago, and has toured its plays to Africa, Asia, Australia, Europe, North America and the Middle East. Under the leadership of Artistic Director Barbara Gaines and Executive Director Criss Henderson, CST was the recipient of a Regional Theatre Tony Award. Its work has been recognized internationally with three of London’s prestigious Laurence Olivier Awards, and by the Chicago theater community with over 80 Joseph Jefferson Awards for Artistic Excellence. CST’s work with Chicago Public School students and teachers was recognized by the White House in 2014 with the National Arts and Humanities Youth Program Award.

Posted by Bonnie Kenaz-Mara at 8:15 PM No comments:

ACT OUT: Black Watch & The Strange Undoing of Prudencia Hart (The OTHER Scottish Plays) #review

Ask any theatre geek what "The Scottish Play" is and he or she will undoubtedly conjure up the infamous Shakespeare play whose name must not be uttered within a theatre or it's bad luck.   Actors can be a superstitious lot.    However, in Chi-town right now, there are two authentic Scottish plays running this month, with real Scottish actors and accents, and major players from The National Theatre of Scotland!    Neither of them is Macbeth, though the troupe IS here in conjunction with Chicago Shakespeare Theatre. 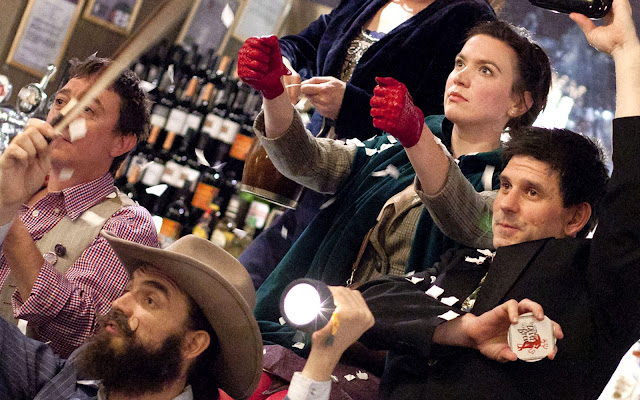 
First up, we're super stoked The National Theatre of Scotland is presenting The Strange Undoing of Prudencia Hart.    Critics are just about universally raving about the show and handing out 5 stars like shots of fine Scotch whisky.
Do not miss this limited run.   The show must close October 28th. 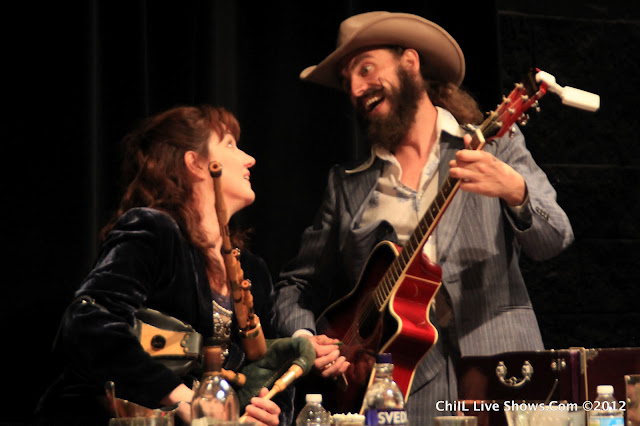 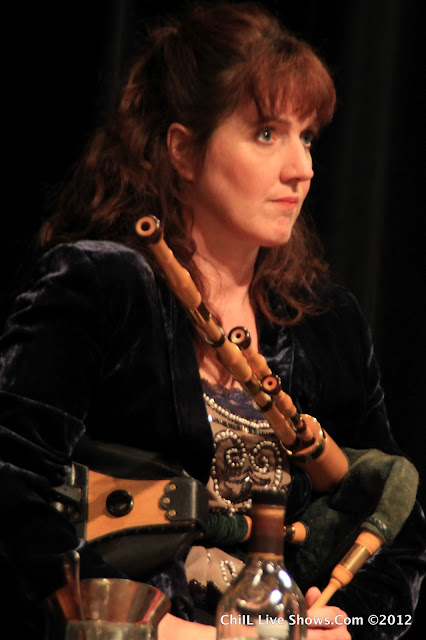 ChiIL Live Shows caught opening night and we loved it.  This show is wickedly funny, creative and smart without pretension.  Much of the dialogue is couplets providing a classy and classic touch. 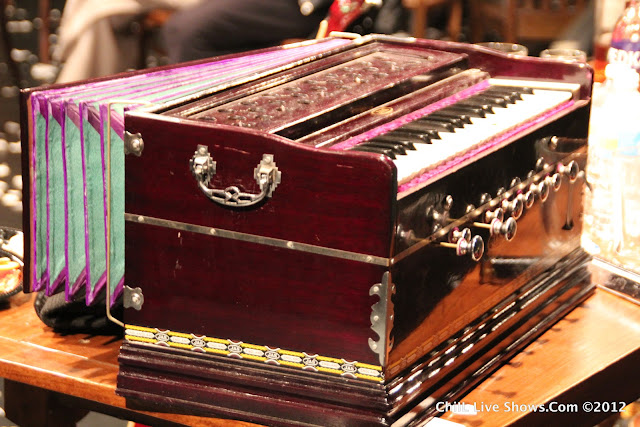 Scottish folk ballads and instruments that have been used for centuries effectively transport the audience out of the intimate, upstairs space at Chicago Shakespeare Theater on Navy Pier and into a recreated Scottish pub. 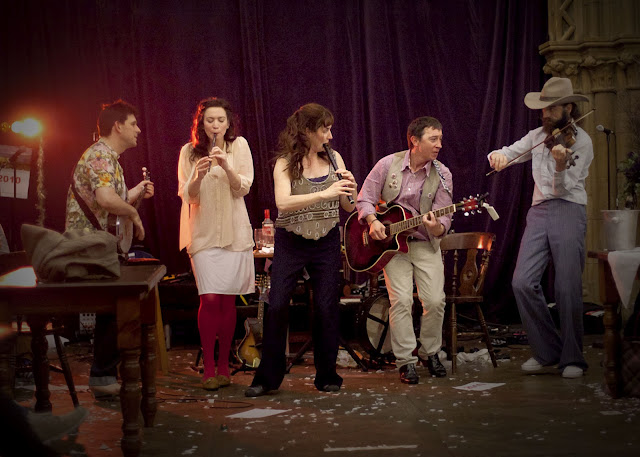 
Yet cell phones, the internet, karaoke, soccer matches, and even modern pop stars are intrinsically woven throughout the story in a brilliant melding of past and present, myth and modern life.   The audience is treated to a rousing night of live theatre, Scottish folk songs, and a truly unique hybrid of classic and modern story telling.   In this interactive show, the 3rd wall is broken down and much of the action takes place among, around and on the audience and their pub tables! The audience is asked to make snow and sing along, and more than a few enjoyed doodling on the paper table cloths. 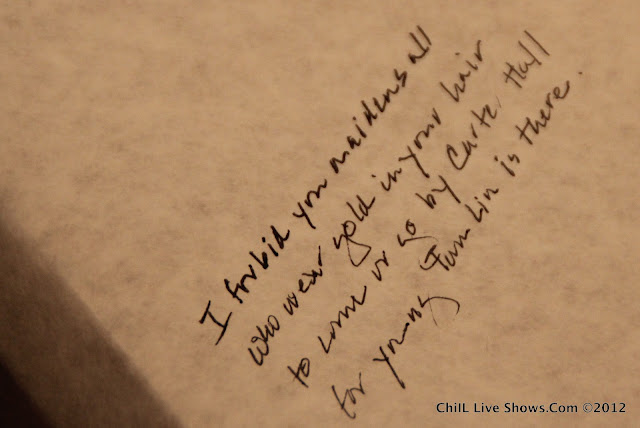 I heard a few older patrons saying they had a bit of trouble with understanding the accents, but I'd say 95% of the dialogue and song was easy to hear and follow along with.  Luckily we were also given a "cheat sheet" that explained the most Scottish of expressions and events not universally known to Chicagoans. 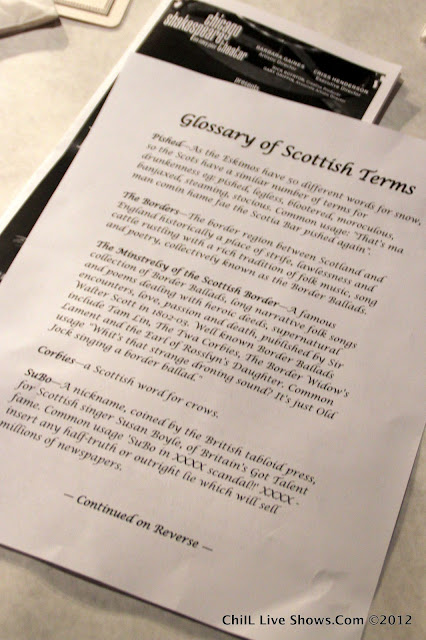 The theatre has a bar in the room and the audience is treated to a free communion cup shot of smoky, rich Benromach Speyside Single Malt Scotch Whisky.   Even my decidedly non-theatre lovin' spouse was placated with a few beers and a shot of 10 year old whisky in front of him, and actually admitted he enjoyed the show! 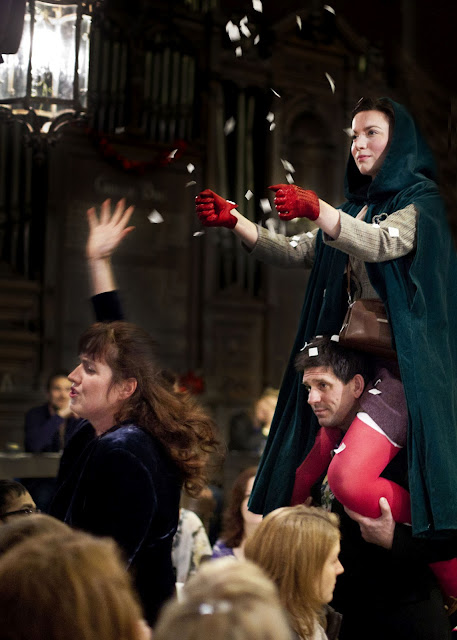 Image 2: Left to right: Annie Grace, Melody Grove and Andy Clark in National Theater of Scotland’s production of The Strange Undoing of Prudencia Hart, presented in the Upstairs Theater at Chicago Shakespeare, now through October 28, 2012. Photo by Drew Farrell.

We dug the misadventures of the aptly named Prudencia Hart, the serious, prudent and prudish academic with her heart tightly under wraps.  Truly the rule of opposites does exist and apply.   Sometimes opponents are unlikely allies. 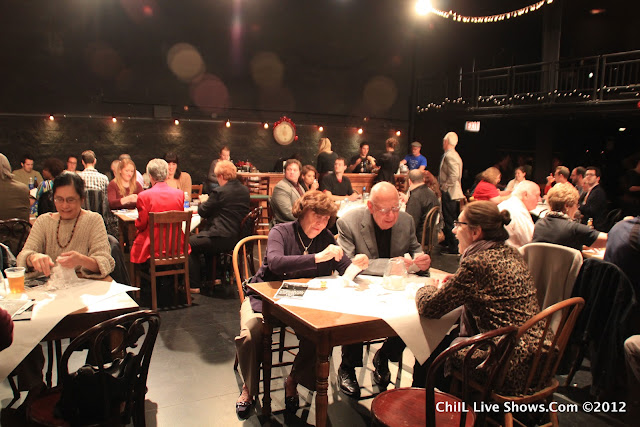 The theater Upstairs at Chicago Shakespeare morphs into the intimate confines of a Scottish pub for National Theatre of Scotland’s The Strange Undoing of Prudencia Hart now through October 28. Complete with pub-style seating and a bar, the production recounts the Faustian tale of Prudencia, an ivory-tower academic sweetly "lost" in her research on Scottish folk music, who finds her world comically unhinged as the love and mythology of her research springs to surprising life.

Winner of a Herald Angel award at the 2011 Edinburgh Festival Fringe, The Scotsman gives it five stars and The Herald declares, “You shouldn’t miss this show for the world... [it’s] rambunctiously life-affirming and touchingly beautiful.”

The Strange Undoing of Prudencia Hart is the product of a weekend visit to a Kelso pub in the Scottish Borders by playwright David Greig, director Wils Wilson and composer Alasdair Macrae. What began as simple research on Scottish Border ballads soon became the inspiration for a story of love, music and the Devil. 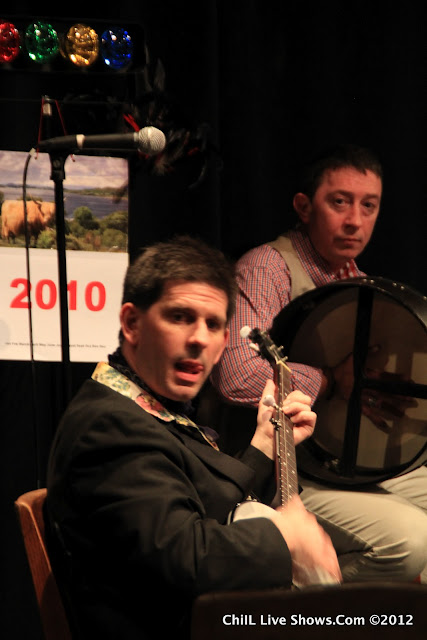 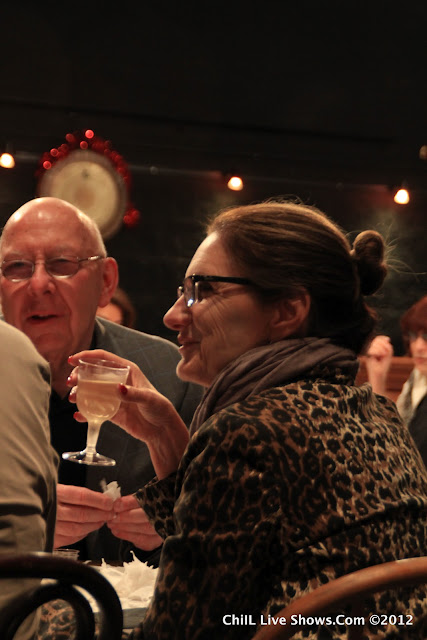 Writer David Greig’s recent work for National Theatre of Scotland includes Dunsinane (Royal Shakespeare Company), Peter Pan and The Bacchae (Edinburgh International Festival). Currently, he is working on a new Broadway production of Charlie and the Chocolate Factory. Director Wils Wilson, a Critics’ Award for Theatre in Scotland (CATS) recipient, has previously worked on National Theatre of Scotland’s Gobbo, devised and created with David Greig, and Home Shetland, created with Jackie Kay. Composer Alasdair Macrae won a CATS for Best Music and Sound for his work on The Strange Undoing of Prudencia Hart. The production’s creative team is rounded out by Designer Georgia McGuinness, Composer and Music Director Alasdair Macrae, Movement Director Janice Parker, and Casting Director Anne Henderson. The cast of The Strange Undoing of Prudencia Hart includes: Andy Clark, Annie Grace, Melody Grove, Alasdair Macrae and David McKay.
Chicago Shakespeare Theater’s limited four-week engagement of The Strange Undoing of Prudencia Hart runs now through October 28, 2012, in the theater Upstairs at Chicago Shakespeare. Tickets are on sale now for $45–60. All patrons receive a 40% discount on guaranteed parking in Navy Pier garages. For more information or to purchase tickets, contact Chicago Shakespeare Theater’s Box Office at 312.595.5600 or visit the Theater’s website at www.chicagoshakes.com. 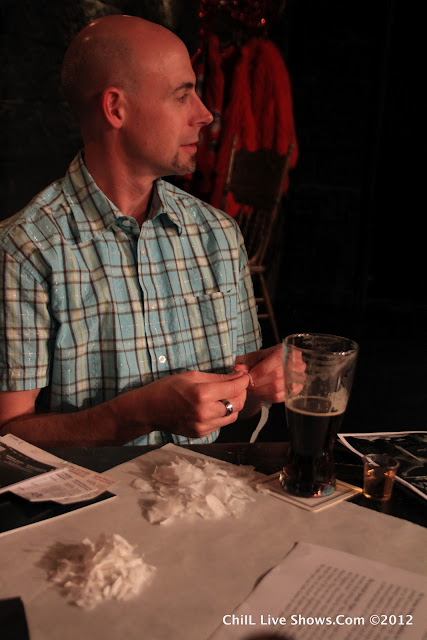 ABOUT NATIONAL THEATRE OF SCOTLAND
Supported by the Scottish Government, National Theatre of Scotland has been involved in creating 181 productions in 156 different locations since its launch in February 2006. With no building of its own, the Company takes theater all over Scotland and beyond, working with existing and new venues and companies to create and tour theater of the highest quality. It takes place in the great buildings of Scotland, but also in site-specific locations, airports and tower blocks, community halls and drill halls, ferries and forests. The company has performed to over 770,000 people, across three continents.

ABOUT CHICAGO SHAKESPEARE THEATER Chicago Shakespeare Theater is a leading international theater company, known for vibrant productions that reflect Shakespeare’s genius for intricate storytelling, musicality of language and depth of feeling for the human condition. Recipient of the 2008 Regional Theatre Tony Award, Chicago Shakespeare’s work has been recognized internationally with three of London’s prestigious Laurence Olivier Awards, and by the Chicago theater community with 62 Joseph Jefferson Awards for Artistic Excellence. Under the leadership of Artistic Director Barbara Gaines and Executive Director Criss Henderson, CST is dedicated to producing extraordinary classic productions, new works and family fare; unlocking Shakespeare’s work for educators and students; and serving as Chicago’s cultural ambassador through its World’s Stage Series.

ABOUT THE WORLD’S STAGE SERIES
Chicago Shakespeare’s presentation of National Theatre of Scotland is emblematic of the wide scope of work presented through the World’s Stage Series—a program that brings the world’s most exciting theatrical events to Chicago audiences and presents Chicago Shakespeare’s work abroad. Since the inception of the World Stage Series in 2000, CST has imported international productions ranging from pedestrian-based live art events (Australia’s one step at a time like this) to grand aerial and water spectacles (France’s Compagnie Transe Express and Ilotopie); and hosted iconic theaters such as Shakespeare’s Globe Theatre (London), The Abbey Theatre (Dublin), the Chekhov International Theatre Festival (Moscow) and La Comédie-Française (Paris). As a leading cultural ambassador, Chicago Shakespeare has presented its work at the Royal Shakespeare Company, The Donmar Warehouse and Stratford East theatres; and this past spring, was among the 37 international companies that came together for an unprecedented 37-play “Globe to Globe” festival for the London 2012 Cultural Olympiad. Chicago Shakespeare, representing North America, brought to Shakespeare’s Globe Theatre in London an original CST commission and world premiere, The Q Brothers’ Othello: The Remix, presented in American hip-hop. The acclaimed production is currently playing at the Edinburgh Festival Fringe. 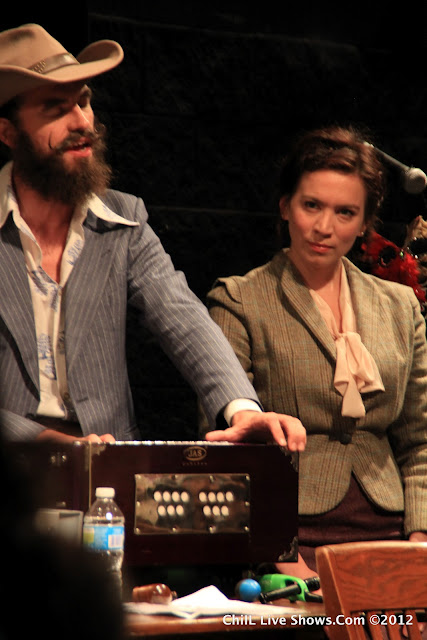 Check out Chicago Shakespeare Theatre's website for advanced tickets for their prolific, professional and profound offerings.

Both are well worth a night out.   Get your tickets today before they sell out or ship out!   Check out ChiIL Live Shows prior coverage here.