FEST PREPARES TO HIT BROOKLYN, TORONTO AND DALLAS FOR THE FIRST TIME

RIOT FEST–the music festival which celebrates rock, indie, punk and underground artists from every era--has announced the line-ups and venues for the after-parties for the Chicago festival (see full line-ups below). The official on-sale begins today, August 21 with a limited number of single-day tickets available. All after-parties are open to 3-day pass holders (subject to capacity). Go to: www.riotfest.org.

This year’s after-parties continue a long-standing tradition unique to RIOT FEST.  "Our after-parties during Riot Fest are solely designed for fans,” explains Riot Fest founder Michael Petryshyn. “Whether it's NOFX bringing down the Congress Theater like they did a few years ago or Alkaline Trio playing a small room for their hometown Chicago fans, these afters are a big thank you to everyone who's been there since we started."

2012 is a big year for the festival, which continues to grow and marks the eighth installment of RIOT FEST’s flagship event in Chicago, as well as new stops in Brooklyn, NY (Saturday, September 8 at Williamsburg Park) Toronto, ON (Sunday, September 9, Fort York at Garrison Common) and Dallas, TX (Saturday, September 22 at Gexa Energy Pavilion).  Also new for 2012: the music festival is expanding to a three-day event in Chicago and launching the festival outdoors in beautiful Humboldt Park on September 15-16.

Michael Petryshyn explains the diversity and wide-appeal of RIOT FEST artists: “We handpick all of the artists from openers to headliners. Iggy and The Stooges, Elvis Costello, Rise Against, Descendents--each bill represents who we are.  Every band on here from Dropkick Murphys to A Day to Remember, all the way to The Jesus and Mary Chain and Gogol Bordello, represents a unique aspect of what Riot Fest was, is and will continue to be in the future.  It’s a key goal for us to attract fans of every generation, otherwise you risk being stagnant.”

The 2012 RIOT FEST after-party line-ups for Chicago are as follows:

The 2012 RIOT FEST day-by-day line-ups are as follows per each city: 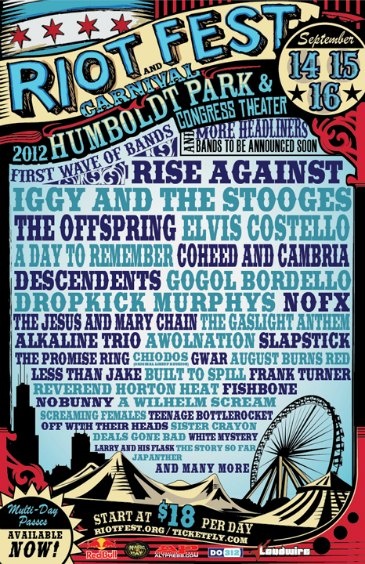 For up to date information regarding all RIOT FEST events, follow online at:

About Riot Fest:
RIOT FEST is the brainchild of promoters Michael Petryshyn and Sean McKeough who launched the first Riot Fest in fall of 2005 throughout multiple music venues in Chicago, IL.  Riot Fest brings fans of all ages together to celebrate rock, indie and punk from every era. The fest has become well-known for reuniting influential underground artists and has quickly become one of the top music destination festivals in the U.S. for fans. A wide array of confirmed talent is on tap for the RIOT FEST events in every city. For full lineups, visit: www.riotfest.org.

Posted by Bonnie Kenaz-Mara at 4:46 PM No comments: