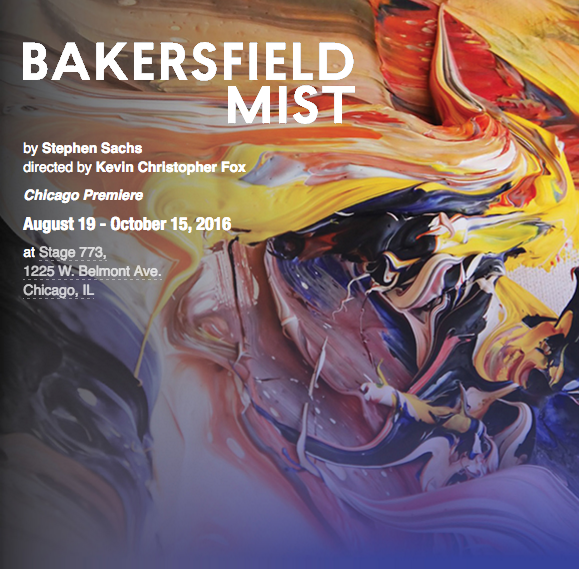 Written by Stephen Sachs and directed by Kevin Christopher Fox, BAKERSFIELD MIST is a provocative and hilarious look at what makes art—and people—authentic. Maude, an unemployed bartender living in a trailer park, has bought the ugliest thrift store painting she could get her hands on as a gag gift. However, when she is told that it might in fact be the “find of the century”—an undiscovered work by the famed Jackson Pollock—she invites a world-class art expert to decide if it’s a forgery or the real thing, worth millions.

BAKERSFIELD MIST had its world premiere at the Fountain Theatre in Los Angeles in 2011 and was named Best New Play by StageSceneLA. It has since enjoyed a run on London’s West End at the Duchess Theatre starring Kathleen Turner and Ian McDiarmid. TimeLine is proud to present the Chicago premiere.
“Sachs’ short, clever play is a battle of wits,” said The New York Times. And the Orlando Sentinel declared that it is a “thought-provoking and cleverly funny examination of the value of art, self-worth, people’s ability to create their own reality, society’s reliance on ‘experts’ and the nature of criticism.” 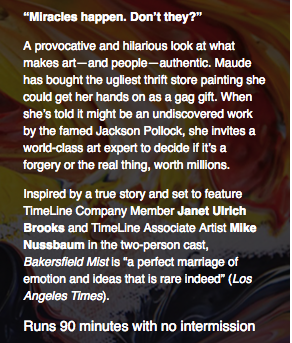 “TimeLine is thrilled to welcome two of Chicago’s finest actors, Mike Nussbaum and Janet Ulrich Brooks, back to TimeLine to launch our 20th Anniversary season with BAKERSFIELD MIST,” said Artistic Director PJ Powers. “This hilarious and provocative play captures the class divide which permeates our country, while also exploring the nature and value of art. It’s a play that will surely get you thinking and talking—two of the goals that have fueled TimeLine for two decades. I can’t wait to see what TimeLine’s roaring 20s will hold."
TimeLine’s production of BAKERSFIELD MIST will be presented at the company’s alternate location, Stage 773, 1225 W. Belmont Avenue in Chicago. Previews start August 19. Press Preview is Thursday, August 25 at 7:30 p.m.

DISCUSSION & ACCESSIBILITY EVENTS:
All discussions are free and open to the public. For further details about all planned discussions and events, visit timelinetheatre.com/events/bakersfield-mist.

Single ticket prices are $38 (Wednesday through Friday), $46 (Saturday evenings) and $51 (Saturday and Sunday matinees). Preview tickets are $22. Student discount is $10 off regular price with valid ID. Military Service Discount is $5 off regular price with valid military/veteran ID. Discounted rates for groups of 10 or more are available. Ticket buyers age 18-35 may join TimeLine’s free MyLine program to obtain access to discounted tickets, special events and more. Visit timelinetheatre.com/myline for details.
Advance purchase is recommended as performances may sell out. For tickets and information, visit timelinetheatre.com or call the Stage 773 Box Office at (773) 327-5252.

LOCATION/TRANSPORTATION/PARKING/ACCESSIBILITY
BAKERSFIELD MIST will take place at Stage 773, 1225 W. Belmont Ave., Chicago. Stage 773 is located one-half block west of the corner of Belmont and Racine and immediately east of Theater Wit in Chicago’s Lakeview East neighborhood. The theater is accessible via the CTA El stop at Belmont (Red/Brown/Purple lines). CTA bus #77-Belmont stops at Racine. Valet parking is available for $10 and there is also limited free and metered street parking nearby. Visit timelinetheatre.com for complete directions and parking information. Stage 773 is accessible for people with disabilities.

Director Kevin Christopher Fox returns to TimeLine after having directed the critically acclaimed production of WIDOWERS’ HOUSES by George Bernard Shaw, as well as multiple new play workshops and readings. Recent Chicago directing highlights include the Chicago premiere of THE BOOK CLUB (16th Street), the world premiere of ASSASSINATION THEATER in its five-month commercial run (Russell Lane, LLC at Museum of Broadcast Communications); the world premieres of GRAVEYARD OF EMPIRES, THE GUN SHOW, PULL OF THE MOON and ACCIDENTAL RAPTURE (16th Street Theater, where he is also an Artistic Associate); LAY ME DOWN SOFTLY and HUGHIE (Irish Theatre of Chicago/Seanachai); WIDOWERS’ HOUSES and ANDROCLES AND THE LION (ShawChicago); ST. CRISPIN’S DAY (Strawdog, four Jeff Award nominations, including Outstanding Production); ARMS AND THE MAN and BETRAYAL (Oak Park Festival); THE LAST DAYS OF JUDAS ISCARIOT (Gift Theatre); BEGGARS IN THE HOUSE OF PLENTY (Mary-Arrchie); and his debut BUICKS (Precious Mettle). Regional highlights include the world premieres of THE SPIRITUALIST and SUNDOWN TOWN, THE FALL OF THE HOUSE and MACBETH (TheatreSquared); MACBETH (Montana Shakespeare in the Parks, Shakespeare in the Schools, adapted and directed) and THE STUDY (William Inge Festival and Center for the Arts). He has directed numerous new play development workshops for TheatreSquared and Chicago Dramatists, among others.

ABOUT TIMELINE THEATRE COMPANY
TimeLine Theatre Company, recipient of the prestigious 2016 MacArthur Award for Creative and Effective Institutions, was founded in April 1997 with a mission to present stories inspired by history that connect with today's social and political issues. To date over 19 seasons, TimeLine has presented 67 productions, including nine world premieres and 27 Chicago premieres, and launched the Living History Education Program, now in its 10th year of bringing the company's mission to life for students in Chicago Public Schools. Recipient of the Alford-Axelson Award for Nonprofit Managerial Excellence and the Richard Goodman Strategic Planning Award from the Association for Strategic Planning, TimeLine has received 52 Jeff Awards, including an award for Outstanding Production 11 times.

TimeLine is a member of the League of Chicago Theatres, Theatre Communications Group, Lakeview East Chamber of Commerce and Chicago’s Belmont Theater District.
Posted by Bonnie Kenaz-Mara at 11:30 AM No comments: