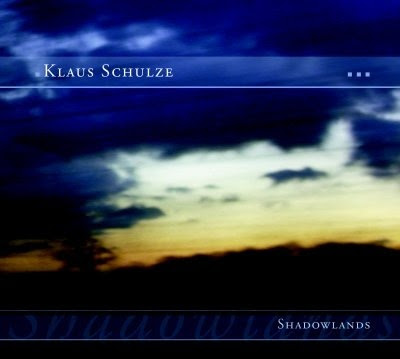 Due to unforeseeable health issues and the resulting delays in production, we have to postpone the release of the upcoming album Shadowlands by KLAUS SCHULZE for one month.

The new release dates of Shadowlands are as follows:

"Keep driving down the forest track," KLAUS SCHULZE directs me, "until you think you've come to the end. From there it's another three kilometres." In second gear there's just enough time to listen to half a track from the new album by this seminal artist. Schulze is standing waving in front of his house somewhere in the heathland forests of Lower Saxony. So this is where it's conceived, that electronic music that has made Berlin-born Schulze an iconic musician since he founded Ash Ra Tempel some 40 years ago, developing his own art form as a communicative hermit after his stint behind the drum kit of Tangerine Dream.

Not even Schulze himself knows the exact number of albums recorded and released by him, it must be somewhere between 200 and 500, some of them sounding almost like identical twins, others not even seeming to belong to the same family. Schulze is the only musician from the legendary Krautrock era to have preserved his absolute freedom in terms of formats. His new opus Shadowlands consists of three tracks with a total playing time of 75 minutes on the first CD. "And on the bonus CD," says Schulze, "there are two tracks, one of them 55 minutes long and the other one 20 minutes or so." He simply doesn't know how to keep it short, the 65-year-old laughs. And he doesn't want to, either. Because he simply can't think of a good reason for doing so. And that's all there is to it.

Perhaps this is why his sonic sculptures, which are usually created by Schulze alone and only very rarely with the support of a few select co-musicians, hold so much fascination for their listeners. Schulze was a pioneer on the Moog, and when he looked at the millions of revellers at the Berlin Love Parade some 15 years ago, one of the organisers told him: "All of this is your fault!" He refused to be monopolised, preferring to settle down behind his custom-made electronica in his crimson-carpeted studio, developing new sounds which seemed like the first contact between Planet Earth and outer space.

"Sure, there are sonic aesthetics which have developed over years," agrees Schulze. "In the beginning, I twiddled the knobs and didn't really know what was about to happen, but after a while everything fell into place." He points out that there are few musicians to have recorded whole albums using a Moog. "Usually there's also an organ or a guitar or something else, but not on my albums. Those sequencer things with filter modulation are pretty typical for me. Sometimes I wonder why others don't do this kind of thing, but I enjoy doing it to this day. It's become a stylistic device for me."

And he has a few of those up his sleeve: your average Massive Attack fan would be more than happy to move on the dancefloor to the sound of "Weird Caravan" from Schulze's 1980 album "Dig It". 1996 saw the arrival of "Are You Sequenced?", a Schulze album which would go down well at a techno club at five in the morning. And Shadowlands fits in everywhere. KLAUS SCHULZE is pretty relaxed when it comes to his own status or that of his music: "Trends and fashions come and go," he comments, smiling. "Disco was one of them; techno was another, slightly more significant one. It enhanced the status of electronic music, which used to be considered a musical direction for highly specialised music fans." However, he does consider techno to be more superficial than "what we did years ago, but that's normal: if you make music for the masses, you're bound to become superficial. The more specific you are, away from the common denominator, the more you remain an outsider." In his case, the playing time of his songs is enough to set him apart. "Who would air 45-minute tracks on the radio? There are only a few aficionados left for whom the origins of electronic music date back to me, Tangerine Dream and Kraftwerk, in other words to the Seventies," but the majority of young music fans don't realise this. "They simply don't know - and they don't have to know. If they happen to hear it, they're meant to enjoy it and not start researching."

Shadowlands features, probably for the umpteenth time, a slightly different Klaus Schulze. One of the reasons for this is the fact that violinist Thomas Kagermann accompanied him for the second time since "Contemporary Works" (2000).

Is he aware of the image which surrounds him and his music? "No, I really have no idea, I steer clear of such considerations," Schulze parries. "Martin Gore of Depeche Mode told me not so long ago that I am a hero for him; with me, that kind of thing goes in one ear and out the other."

He doesn't like to be referred to as a pioneer of electronic music "because that always brings to mind some kind of Boy Scout camp. I made my music back then because I enjoyed it, not because I wanted to do something that nobody had done before. I simply embarked on a search, the outcome of which has never been clear to me and hasn't become any clearer to this day." That sounds like there could be a whole lot more albums by KLAUS SCHULZE in the pipeline. In other words - it sounds good.