OPENING: Midwest Premiere! of HOT PINK, OR READY TO BLOW Via New American Folk Theatre Through 4/7/18 at The Den 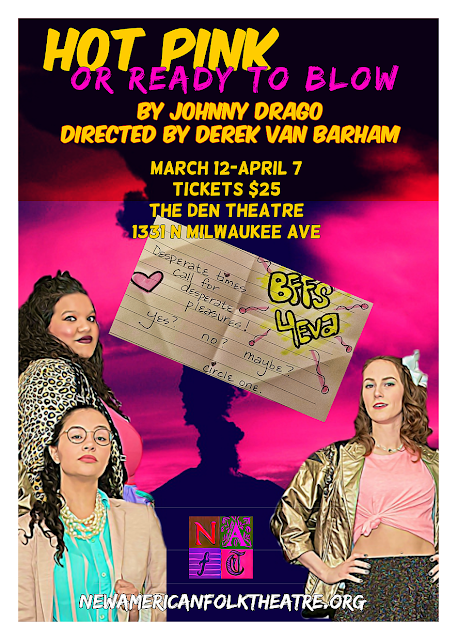 I'll be out for the press opening on 3/12, reviewing for ChiIL Live Shows. Check back soon for my full review.

About the Artists
Johnny Drago (Playwright) is a queer, Brooklyn-based Southern playwright and performer, who makes comedies and tragedies about sex, death and the occult – all his favorite social taboos! He's a narrative structure junkie with genre fiction on the brain, but has begun exploring ideas of autobiography, intimacy and more relaxed modes of storytelling in his plays. His work has been produced and/or developed by Actors Theatre of Louisville, The Lark, Pig Iron Theatre Company, the HOT! Festival at Dixon Place, The Barter Theatre, New American Folk Theatre, 7 Stages, The Weird Sisters Theatre Project, The Process Theatre Co. and Actor's Express. As Dismantle Theater (with contemporary choreographer Erik Thurmond), Drago also makes experimental performance essays that tiptoe along the line between theatre and dance. His MFA is from Indiana University.

Derek Van Barham (Director) is the Associate Artistic Director of Pride Films & Plays, a member of the Red Tape Theatre ensemble and a former Artistic Director of The Ruckus. For PFP, he has directed Perfect Arrangement, Angry Fags (Steppenwolf Garage Repertory), Songs from an Unmade Bed (Jeff nomination: Best Director of a Musical or Revue) and PRISCILLA, Queen of the Desert: The Musical. He also wrote, directed and choreographed BITE: A Pucking Queer Cabaret and Kill Your Boyfriends. Other directing credits include Three Days of Rain (Boho), Miracle! by Dan Savage and Skooby Don't (Hell in a Handbag) Trash and Deep in the Heart of Tuna (New American Folk Theatre) and From These Fatal Loins (The Ruckus). He was recently named one of Windy City Times “30 Under 30,” recognizing individuals from Chicago's LGBTQ+ community. MFA: Chicago College of Performing Arts at Roosevelt University. 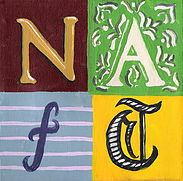 About New American Folk Theatre
New American Folk Theatre is dedicated to folk theatre, music, education, and stories that shine a new light on the American tale. We strive to educate the public on works worthy of inclusion to the American theatrical canon. Using the resources around us, we create art that often dives into a mix of magical realism, southern gothic, pop culture, and the irreverent. We produce impactful theatre and artistic projects that help us learn and grow as a society. For additional information, visit www.newamericanfolktheatre.org.
Posted by Bonnie Kenaz-Mara at 12:02 PM No comments: