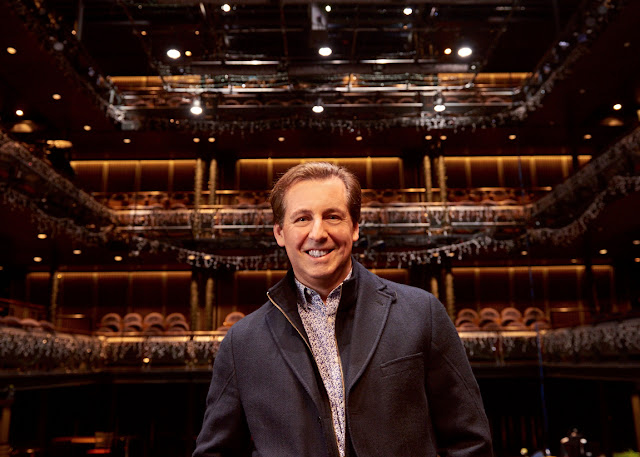 Criss Henderson, who has steered Chicago Shakespeare Theater from a fledgling start-up theater in 1990 through 33 years of expansive growth, award-winning productions, and nationally recognized education and community engagement programming, has announced that he will be stepping down from his executive director role at the end of 2022.

"After more than three decades of extraordinary experiences and a lot of recent reflection, I have decided there are new creative chapters and artistic projects that I want to bring to fruition outside of the day-to-day operations of running a theater," said Henderson. "As Chicago Shakespeare passes its 36th year, I feel the Theater is ready for an infusion of fresh perspectives and next-generation vision."

"I have been leading Chicago Shakespeare for more than half my life, and I have had some truly remarkable opportunities. Now, with the buzz of artists and audiences again filling Chicago Shakespeare—and on the eve of another world premiere, The Notebook, in our theater—it feels right to make the space for myself to develop new creative projects and to open the door to new leadership that will take the company to the next thrilling level."

Under the leadership of Henderson and founder and artistic director Barbara Gaines (who announced earlier this year her plans to end her tenure in mid-2023), Chicago Shakespeare has become one of the nation’s leading regional theaters and one of Chicago’s most celebrated cultural organizations, honored with the 2008 Tony Award for Outstanding Regional Theatre, as well as multiple Laurence Olivier and Joseph Jefferson Awards. Among decades of contributions, Henderson oversaw the Theater’s move to its home on Navy Pier in 1999 and led the recent development of The Yard at Chicago Shakespeare. In 2016 he spearheaded the citywide, yearlong celebration of Shakespeare’s legacy, Shakespeare 400 Chicago. Mr. Henderson has garnered multiple honors, including: the 2013 Cultural Innovation Award from the Chicago Innovation Awards; Arts Administrator of the Year by Arts Management Magazine at the Kennedy Center; recognition in Crain’s Chicago Business "40 under 40;" and the Chevalier de L’Ordre des Arts et des Lettres by the Minister of Culture of France. Mr. Henderson has served on the boards of directors of the League of Chicago Theatres and Arts Alliance Illinois, and for many years as president of the Producers’ Association of Chicago-area Theaters. Mr. Henderson is director of DePaul University’s MFA/Arts Leadership Program, a two-year graduate-level curriculum in arts management training.

"Criss has led Chicago Shakespeare through every phase of the organization’s storied and successful history. In addition to the myriad business functions he oversaw, he has been a key producing force in the organization through his curation of the Theater’s WorldStage series, the development of hundreds of artistic and producing partnerships, and through the creation and implementation of many of Chicago Shakespeare’s marquee initiatives like Team Shakespeare—the Theater’s extensive program for students and teachers—and Chicago Shakespeare in the Parks, now in its 11th year," said Chicago Shakespeare Theater Board Chair Mark Ouweleen. "Criss’ entrepreneurial energy has guided and supported the Theater for decades, and he will leave us in good hands, with a very strong executive team who will help carry that spirit of adventurous creativity forward."

Added Barbara Gaines, "Criss made a lot of magic happen here for many years…. Chicago Shakes wouldn’t be as spectacular an institution without him. I’ll be thrilled to see what amazing innovations he’ll bring to new audiences in the future."

The Board of Directors plans to bring in interim leadership before Henderson departs at the end of the year while it conducts an international search for the leaders who will carry the Theater "into the next act of the extraordinary story of Chicago Shakespeare," said Ouweleen. Henderson will continue on a consulting basis with Chicago Shakespeare through 2023, as needed, to support a smooth leadership transition.

"It has been a great honor to help build this company from, literally, ‘two planks and a passion’ into the leading and essential arts organization it is today," said Henderson. "The extraordinary evolution of Chicago Shakespeare was the result of many, many partnerships—with Barbara, artists, educators, program and administrative staff, board members, and most importantly, the people of Chicago. I have had the pleasure to work alongside so many talented and committed people over the years—I know I leave this theater that I love in a very strong place, ready to embrace an exciting and vibrant future."

A Regional Tony Award recipient, Chicago Shakespeare Theater produces a bold and innovative year-round season—plays, musicals, world premieres, family productions, and theatrical presentations from around the globe—alongside education programming for students, teachers, and lifelong learners, and engagement with communities and artists across the city.

Founded in 1986, the Theater has evolved and expanded to present as many as twenty productions and 650 performances annually and has been honored with numerous national and international awards. Chicago Shakespeare is the city’s leading presenter of international work and has toured its own productions to five continents. The Theater is dedicated to welcoming the next generation of theatergoers; one in four of its audience members is under the age of eighteen.

Recognized as a national leader in a 2014 White House ceremony, the Theater’s arts-in-literacy programs support the work in classrooms across the region by bringing words to life onstage for tens of thousands of students each year and through a variety of professional learning opportunities for teachers. Its free Chicago Shakespeare in the Parks program has fostered creative community engagement with artists across the city for more than a decade.

As a nonprofit organization, Chicago Shakespeare works to embrace diversity in all its forms, prioritize inclusion, provide equitable opportunities for growth and success, and offer an accessible experience for all. The Theater strives to engage today’s artists and audiences in active and critical conversations with the work of its namesake playwright, William Shakespeare.

Located on Chicago’s iconic Navy Pier, Chicago Shakespeare’s campus features the Jentes Family Courtyard Theater, The Yard at Chicago Shakespeare, and the Thoma Theater Upstairs. Onstage, in classrooms and neighborhoods across the city, and in venues around the world, Chicago Shakespeare is a multifaceted cultural hub—inviting audiences, artists, and community members to share powerful stories that connect and inspire. www.chicagoshakes.com