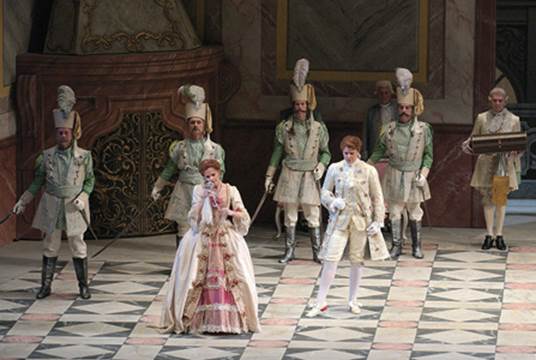 The opera stars Sophie Koch (Feb. 8-20) and Alice Coote (Mar. 4-13) in the title role as the teenaged “Rose Cavalier,” Octavian, who is amorously involved with a woman twice his age, Princess von Werdenberg, a.k.a. the Marschallin, sung by Amanda Majeski. Her cousin, the boorish Baron Ochs (Matthew Rose/debut), plans to marry Sophie (Christina Landshamer/American debut) for her family’s money. Sophie, however, falls hard for the betrothal messenger Octavian instead, and he with her. Much merry confusion ensues – including Ochs pursuing a chambermaid who’s really Octavian in disguise – before the rapturous trio and duet that conclude this musically divine comedy, when the Marschallin releases her young lover and Sophie and Octavian are united.

Edward Gardner conducts the production directed by Martina Weber (both debuts). Sets and costumes are designed by Thierry Bosquet with lighting by Duane Schuler. Michael Black is chorus master.

“The cast is really superb,” says Anthony Freud, Lyric’s general director. “Amanda Majeski triumphed here as the Countess in The Marriage of Figaro to open our season and recently sang her first Marschallin in Frankfurt. Sophie Koch and Alice Coote are two of today’s most remarkable interpreters of Octavian. Christina Landshamer is a brilliant young German soprano who gave one of the most exciting auditions I’ve ever heard, and Matthew Rose is a tremendous young bass with a major international career, both of whom will be making their Lyric debuts.”

Lyric’s presentation of Der Rosenkavalier is generously made possible by an Anonymous Donor and Mr. & Mrs. Dietrich M. Gross.