Here at ChiIL Live Shows, we've caught a handful of boxing plays over the years, and their rhythm and cadence is not unlike theatre staging. We're particularly excited for Victory Gardens' Midwest Premiere of Sucker Punch with it's timely and discussion provoking racial overtones. We'll be reviewing at the press opening this Friday so check back soon for our full review. 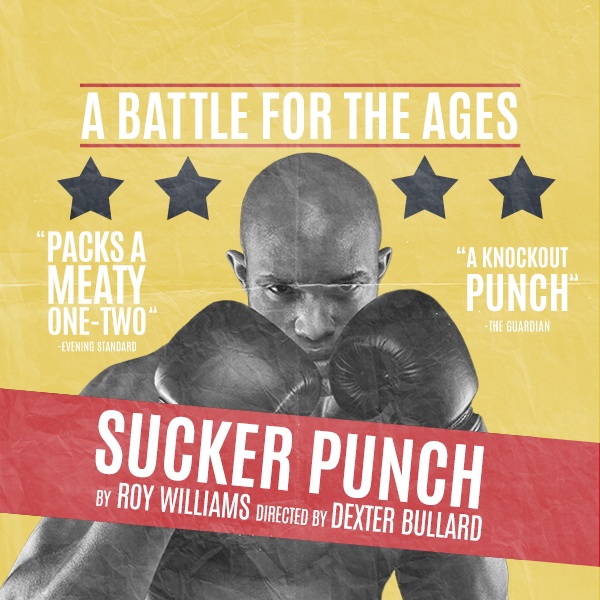 "We're thrilled to welcome Roy Willams to our Victory Gardens family as he makes his Chicago debut with Sucker Punch. I first met Roy when he was our guest on a panel of British playwrights of color that Victory Gardens hosted during our 2011 London Trip. I've since been a big fan of his work, especially Sucker Punch in which he masterfully captures the dreams and struggles of the Black British that mirrors our very own contemporary African American experience. I can't wait for Chicago audiences to see this electrifying play and encounter one of Britain's greatest contemporary playwrights," comments Artistic Director Chay Yew.

It’s the 1980s, Michael Jackson rules the radio waves and Conan the Barbarian is the box office king at the movies. Aspiring black boxers, Leon and Troy, both have promising futures in the ring. When race riots explode in their London neighborhood, these two friends are forced to make a tough decision. Years later, they square off, facing each other and the men they have become. After premiering at The Royal Court in London, award-winning playwright Roy Williams’ Sucker Punch received four-star reviews from The London Times, Evening Standard, and The Telegraph and was called a “Knockout Punch” by The Guardian. This fast-paced, triumphant mid-west premiere takes an unflinching look at family, friends and the world of boxing.

Kenn E. Head (Squid) is a veteran of the Chicago theatre scene. He is a familiar face on many Chicago stages appearing in Romeo and Juliet (Chicago Shakespeare Theater); Fish Men, The Convert  (Goodman Theatre); The Lost Boys of Sudan (Victory Gardens Theater) and Seven Guitars (Congo Square Theatre) where they garnered the coveted Jeff Award for Ensemble as well as Best Play. Kenn was also part of the Invisible Man and the production of Spunk (Court Theatre). Some of his most recent work includes The Overwhelming (Next Theater Company). Other theaters include Yale Repertory Theatre and American Theater Company. Television credits include “ER” and “Early Edition” as well as various commercials.

John Judd (Charlie) returns to Victory Gardens where he appeared in Death And The Maiden. He has performed at The Goodman Theatre: The Little Foxes, Measure For Measure, Sweet Bird of Youth, The Iceman Cometh, A Christmas Carol, Magnolia, Shining City. At Steppenwolf: Three Sisters, Clybourne Park, The Butcher Of Baraboo, Last Of The Boys, The Dresser, Orson’s Shadow, Our Town, Golden Boy. At Writer’s Theatre: Othello, Crime And Punishment, The Price. At Chicago Shakespeare Theatre: The Feast: An Intimate Tempest, Romeo And Juliet. At Northlight: The Lieutenant Of Inishmore, The Cripple Of Inishmaan. At Court: Lettice And Lovage, Gross Indecency. At Lookingglass: Great Men Of Science. At A Red Orchid: Gagarin Way. At Profiles: Wrecks, At About Face: Execution Of Justice, Shattered Globe: Come Back Little Sheba, Next: A Number, The Boarding House, Irish Rep: Long Day’s Journey Into Night, The Journeymen: Angels In America parts I and II. Off-Broadway: The Iceman Cometh at BAM, Crime And Punishment at 59E59, Orson’s Shadow at Barrow Street. Regionally and Internationally: Tribes at Actor’s Theatre Of Louisville, City Theatre Pittsburgh, Philadelphia Theatre Co., The Rainmaker at The Old Globe, San Diego, American Buffalo at McCarter Theatre Princeton, Shining City at Huntington Theatre Boston, Orson’s Shadow at Williamstown, Westport Country Playhouse, and Beaver Creek Colorado, Long Day’s Journey Into Night at Town Hall Theatre in Galway, Ireland.

About Victory Gardens Theater
Under the leadership of Artistic Director Chay Yew and Managing Director Christopher Mannelli, Victory Gardens is dedicated to artistic excellence while creating a vital, contemporary American Theater that is accessible and relevant to all people through productions of challenging new plays and musicals. With Victory Gardens’ first new Artistic Director in 34 years, the company remains committed to the development, production and support of new plays that has been the mission of the theater since its founding, continuing the vision set forth by Dennis Zacek, Marcelle McVay, and the original founders of Victory Gardens Theater.

Since its founding in 1974, the company has produced more world premieres than any other Chicago theater, a commitment recognized nationally when Victory Gardens received the 2001 Tony Award for Outstanding Regional Theatre. Located in the Lincoln Park neighborhood, Victory Gardens Biograph Theater includes the Zacek-McVay Theater, a state-of-the-art 259-seat mainstage and the 109-seat studio theater on the second floor, named the Richard Christiansen Theater.