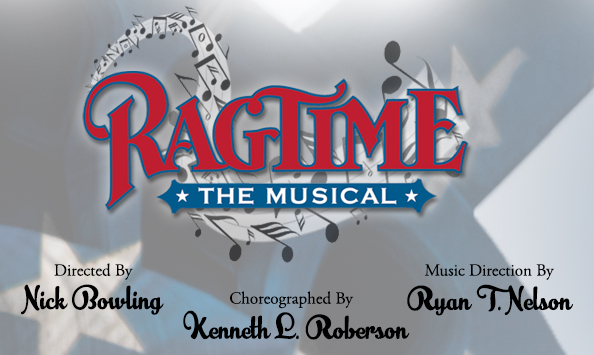 
Here at ChiIL Live Shows we adore Marriott Theatre productions, from their stellar casting choices to their unique theatre in the round staging. We're eager to see their latest extravaganza and kick off for their 2018 season, Tony Award-winning Broadway musical, RAGTIME. I'll be out on February 1st to catch it, so check back soon for my full review.

From the volatile melting pot of New York City at the dawn of a new century, comes the Tony Award-winning Broadway musical, RAGTIME, kicking off Marriott Theatre’s 2018 Season, January 24 through March 18, 2018 with a press opening on Wednesday, January 31 at 7:30 p.m. at 10 Marriott Drive, Lincolnshire. Featuring a powerful score by the Tony Award-winning composer/lyricist team of Stephen Flaherty and Lynn Ahrens, and book by four-time Tony Award winner Terrence McNally, RAGTIME is a sweeping musical portrait of America. Seven-time Jeff Award winner Nick Bowling (The Bridges of Madison County, Man of La Mancha, The King and I) returns to Marriott Theatre to direct, with Musical Direction by Jeff Award winner Ryan T. Nelson and Choreography by Kenneth L. Roberson.

“RAGTIME is a musical about individual people, but it shows the bigger picture of a struggling country, which is often divided by race, class, and economic standing, working together for American progress,” says Director Nick Bowling. “We live in such explosive times, but often, to move forward, it is necessary to endure hardships, and I think that is what makes RAGTIME such an emotional and beautiful musical.”

At the dawn of a new century, everything is changing and anything is possible. Based on the distinguished novel by E.L. Doctorow, this musical weaves together three distinctly American tales – that of a stifled upper-class wife, a determined Jewish immigrant and a daring young Harlem musician – united by their courage, compassion and belief in the promise of the future. Together, they confront history's timeless contradictions of wealth and poverty, freedom and prejudice, hope and despair... and what it means to live in America. Written by the award-winning composer/lyricist team of Stephen Flaherty and Lynn Ahrens (Once on this Island, Anastasia, Seussical) and noted playwright Terrence McNally, this acclaimed musical is filled with pageantry, emotion and hope, bursting onto the stage like no other musical.

Call for student, senior and military discounts. On Wednesday and Thursday evenings there are a limited number of dinner-theatre packages available for purchase through the Marriott Theatre Box Office. To make a restaurant reservation, please call 847.634.0100. Free parking is available at all performances. To reserve tickets, please call The Marriott Theatre Box Office at 847.634.0200 or go to www.ticketmaster.com. Visit www.MarriottTheatre.com for more information.

Posted by Bonnie Kenaz-Mara at 4:47 PM No comments: