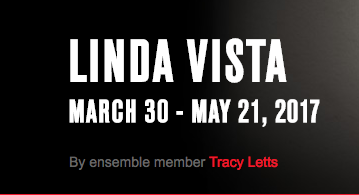 Wheeler is 50. His marriage is over, his job is mundane, and the best years of his life appear to be behind him. A move from the cot in his ex-wife’s garage to his own apartment opens up new possibilities for love and sex—complicated, painful and hilarious. Full of opinions, yet short on self-examination, Wheeler is a modern misanthrope who must reconcile the man he has become with the man he wants to be.

Dexter Bullard (Director) has strong ties with Steppenwolf, having directed Annie Baker’s The Flick last season to critical acclaim. He directed ensemble member Tracy Letts’s Bug at the Barrow Street Theater, for which he received the 2004 Lucille Lortel Award for Outstanding Direction Off-Broadway. He has directed for Steppenwolf’s First Look Repertory of New Work in 2006 and 2013. Additional directing credits Craig Wright's Grace on Broadway, Roy Williams' Sucker Punch and Annie Baker's Circle Mirror
Transformation at Victory Gardens. He is the head of Graduate Acting and Showcase Artistic Director with The Theatre School at DePaul University.

Curtain Times: Tuesday – Friday at 7:30pm, Saturdays and Sundays at 3pm and 7:30pm
Ticket prices: Previews: $20 – $54, Regular Run: $20 – $89. Prices subject to change
20 for $20: Twenty $20 tickets are available for subscription shows on the day of the performance at 11am (Mon – Sat) and 1pm (Sun), by phone only at 312-335-1650. Limit 2 per person. Rush Tickets: Half-price rush tickets are available one hour before each show. Student Discounts: Limited $15 student tickets are available online. (Limit 2 tickets. Must present a valid student ID for each ticket). For additional student discounts, visit steppenwolf.org/students.

Black Card Memberships are for audiences interested in extreme flexibility. Cards include six tickets for use any time, for any production including the LookOut Series. The tickets are valid for one year with the option to add additional tickets as needed. Perks include easy and free exchanges, access to seats before the general public, savings on single ticket prices and bar and restaurant discounts for pre- and post-show socializing. More info at steppenwolf.org/memberships

Visitor Information & Accessibility
Steppenwolf is located at 1650 N Halsted St near all forms of public transportation and is wheelchair accessible. The parking facility consists of both a covered garage ($11 cash or card) and an open-air lot, located just south of our theater at 1624 N Halsted. Valet parking service ($14 cash) is available directly in front of the main entrance at 1650 N Halsted St starting at 5pm on weeknights, 1pm on weekends and at 12 noon before Wednesday matinees. Street and lot parking are also available. For last minute questions and concerns, patrons can call the Steppenwolf Parking Hotline at (312) 335-1774. Committed to making the Steppenwolf experience accessible to everyone, performances featuring American Sign Language interpretation, open captioning and audio description are offered during the run of each play. Assistive listening devices and large-print programs are available for every performance. With the expertise of Assistive Hearing Systems Ltd., Steppenwolf installed an induction loop on both the main and balcony levels of our Downstairs Theatre in 2015. There is also an induction loop installed in the 1700 Theatre.

Steppenwolf Theatre Company is the nation’s premier ensemble theater—redefining the landscape of acting and performance. Formed by a collective of actors in 1976, the ensemble has grown to 47 members who represent a remarkable cross-section of actors, directors and playwrights. Thrilling and powerful productions from Balm in Gilead to August: Osage County—and accolades that include the National Medal of Arts and 12 Tony Awards—have made the theater legendary. Steppenwolf produces hundreds of performances and events annually in its three spaces: the 515-seat Downstairs Theatre, the 299-seat Upstairs Theatre and the 80-seat 1700 Theatre. Artistic programing includes a seven-play season; a two-play Steppenwolf for Young Adults season; Visiting Company engagements; and LookOut, a multi-genre performances series. Education initiatives include the nationally recognized work of Steppenwolf for Young Adults, which engages 14,000 participants annually from Chicago’s diverse communities; the esteemed School at Steppenwolf; and Professional Leadership Programs for arts administration training. Steppenwolf’s own Front Bar: Coffee and Drinks serves coffee, cocktails and a menu curated in partnership with the Boka Restaurant Group day and night. While firmly grounded in the Chicago community, nearly 40 original Steppenwolf productions have enjoyed success both nationally and internationally, including Broadway, Off-Broadway, London, Sydney, Galway and Dublin. Anna D. Shapiro is the Artistic Director and David Schmitz is the Executive Director. Eric Lefkofsky is Chair of Steppenwolf’s Board of Trustees.