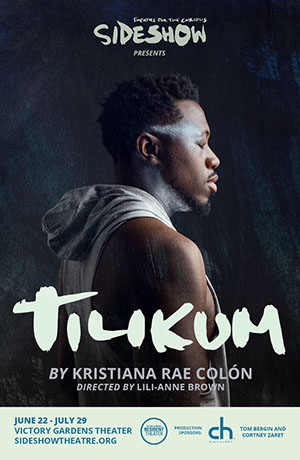 Tilikum was a king, and the oceans of the world were his. Now, he is a captive in a marine amusement park, doomed to live as an opportunity for profit. Alone behind bars he forgets the feel of freedom, but when fellow prisoners ignite the fires of his memory, he starts down a path that threatens to consume everything. Ripped from the headlines, Kristiana Rae Colón’s Tilikum explores captivity, violence and rebellion in a vital and visceral blend of theatre, drumming and dance. Poetic and lyrical, Tilikum calls out the power structures – both corporate and human – that ensure continued oppression, and the complicity of those willing to stand by and do nothing.

Comments Sideshow Artistic Director Jonathan L. Green, "Tilikum will be a spectacular, heart-pounding experience. When we commissioned this play through our Freshness Initiative program, we knew that the work would be fiercely political with a wicked sense of humor, and still we were blown away when the first draft came in. Kristiana Rae Colón is one of the most essential voices in playwriting right now, and we consider ourselves lucky to be presenting this world premiere."

Kristiana Rae Colón (Playwright) is a poet, playwright, actor, educator, Cave Canem Fellow and executive director of the #LetUsBreathe Collective. Her play Octagon, winner of Arizona Theater Company's 2014 National Latino Playwriting Award and Polarity Ensemble Theater's Dionysos Festival of New Work, had its world premiere at the Arcola Theater in London in September 2015. Her work was featured in Victory Gardens' 2014 Ignition Festival. In 2013, she toured the UK with her collection of poems promised instruments published by Northwestern University Press. In autumn 2012, she opened her one-woman show Cry Wolf at Teatro Luna in Chicago while her play but i cd only whisper had its world premiere at the Arcola Theater in London and American premiere in 2016 at The Flea in New York. Kristiana is a part of the Goodman Theatre's Playwrights Unit, a resident playwright at Chicago Dramatists and one half of the brother/sister hip-hop duo April Fools. She appeared on the fifth season of HBO's “Def Poetry Jam.”

Lili-Anne Brown (Director) is a native Chicagoan, who works as a director, actor and educator, both locally and regionally. She is the former artistic director of Bailiwick Chicago, where she directed Dessa Rose (Jeff Award), Passing Strange (BTA Award and Jeff nomination for Best Director of a (Musical), See What I Wanna See (Steppenwolf Theatre Garage Rep) and the world premiere of Princess Mary Demands Your Attention by Aaron Holland. Other directing credits include The Wolf at the End of the Block (16th Street Theatre), Marie Christine (Boho Theatre), Peter and the Starcatcher (Metropolis Performing Arts), The Wiz (Kokandy Productions), Xanadu (American Theatre Company), Jabari Dreams of Freedom by Nambi E. Kelley (world premiere, Chicago Children’s Theatre), American Idiot (Northwestern University); the national tour of Jesus Snatched My Edges; and Little Shop of Horrors, Hairspray, Unnecessary Farce, Cabaret, Sweet Charity, The 25th Annual Putnam County Spelling Bee and Buddy: The Buddy Holly Story at Timber Lake Playhouse. She is a member of SDC, SAG-AFTRA, and a graduate of Northwestern University.

Sideshow is also the producer of Chicago League of Lady Arm Wrestlers (CLLAW), a wildly popular fundraiser held in benefit of Sideshow Theatre Company and other local community organizations. CLLAW has been featured in local and national press, including The Washington Post, Reuters and the Chicago Sun-Times and on WGN Morning News, ABC 7’s Windy City Live and CBS 2. The next CLLAW match is Saturday, July 21, 2018 at Logan Square Auditorium. For more information about CLLAW, visit cllaw.org.