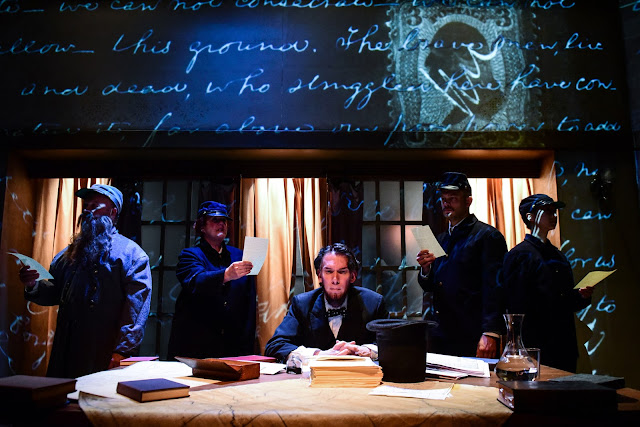 (center) Lawrence Grimm and the cast of Shattered Globe Theatre’s Chicago premiere of THE HEAVENS ARE HUNG IN BLACK by James Still, directed by Louis Contey. Photo by Evan Hanover.

Shattered Globe Theatre is pleased to launch its 2017-18 Season with the Chicago premiere of Pulitzer Prize nominee James Still’s fevered, emotional epic THE HEAVENS ARE HUNG IN BLACK, a theatrical rendering of Abraham Lincoln's struggle as a man of conscience to lead a divided country, directed by SGT Ensemble Member Louis Contey*. THE HEAVENS ARE HUNG IN BLACK will play September 7 – October 21, 2017 at SGT’s resident home Theater Wit, 1229 W. Belmont Ave. in Chicago. Tickets are currently available at www.shatteredglobe.org, by calling (773) 975-8150 or in person at the Theater Wit Box Office.

Presented for the first time in the “Land of Lincoln,” THE HEAVENS ARE HUNG IN BLACK is Pulitzer Prize nominee James Still’s personal interpretation of the fevered, emotional months between the death of Abraham Lincoln’s young son and the signing of The Emancipation Proclamation. Cannon fire from across the Potomac echoes in the halls of the White House as dreams of Lincoln’s famous adversaries and unnamed soldiers walk through his waking life. His imperfections and humanity are both revealed in this moving theatrical epic which explores the conscience of the man who led America in a war that we’re still fighting today.

“The Heavens are Hung in Black portrays a transformational moment in Abraham Lincoln’s life and worldview,” comments Director Louis Contey. “In 1862, after nearly a year of bloody civil war, Lincoln must find a way of elevating the purpose of the conflict and save the Union. It is said that the office of President changes the individual who occupies it. With his conscience gnawing at him Lincoln begins to evolve as he considers the virtues and controversy of emancipation. The play, for me, embodies the essence of moral leadership and the idea of doing the right thing for the right reason, or as Lincoln himself states, listening ‘to the better angels of our nature’.”

THE HEAVENS ARE HUNG IN BLACK was commissioned by and premiered at Ford’s Theatre in 2009, where Lincoln was famously shot.

About the Artists:
James Still’s (Playwright) award-winning plays have been produced at theatres throughout the United States, Canada, Europe, Japan, China and Australia. He is the playwright-in-residence at the Indiana Repertory Theatre, artistic affiliate with American Blues in Chicago, a winner of the William Inge Festival’s Otis Guernsey New Voices in American Theatre Award, the Medallion for Sustained Achievement from the Children’s Theatre Foundation of America and the Charlotte B. Chorpenning Playwright Award for Distinguished Body of Work. He is an elected member of the National Theatre Conference and a member in the College of Fellows of the American Theatre. Three of Still’s plays have received the Distinguished Play Award from the American Alliance for Theatre & Education. His work has twice been nominated for the Pulitzer Prize. His plays have been developed and workshopped at the Sundance Playwrights Lab, the New Harmony Project, the Eugene O’Neill Theater Center, the Lark Play Development Center, Telluride Playwrights Festival, the Bonderman Playwriting for Youth National Competition & Symposium and New Visions/New Voices at the Kennedy Center for Performing Arts. Still’s plays featured by Dramatic Publishing include The Heavens  are Hung in Black, The Velvet Rut, Iron Kisses, Searching for Eden: the diaries of adam and eve, A Long Bridge Over Deep Waters, Looking Over the President’s Shoulder, He Held Me Grand, And Then They Came for Me: Remembering the World of Anne Frank, A Village Fable, Hush: An Interview With America, The Gentleman From Indiana and The Velocity of Gary. His new plays include I Love to Eat, The House that Jack Built and Illegal Use of Hands. In addition to his work in theatre, Still also works in television and film.He has been nominated for five Emmy awards and an award from the Television Critics Association. He was also twice a finalist for the Humanitas Prize. Still was a producer and head writer for the Discovery Kids series Paz, head writer of the television series Frog & Friends for Amsterdam-based Telescreen and writer for the children’s film Miffy. For Nickelodeon, he was a writer and story editor for Maurice Sendak’s long-running Little Bear and the Bill Cosby series Little Bill. He wrote The Little Bear Movie and the feature film, The Velocity of Gary. Still grew up in a small town in Kansas, graduated from the University of Kansas and lives on the West Coast.

Louis Contey (Director) recently rejoined the ranks of Shattered Globe Theatre as an ensemble member. The Heavens are Hung in Black marks his 22nd collaboration with SGT, where he has also directed The Tall Girls, In the Heat of the Night, A View From The Bridge, The Manchurian Candidate, A Streetcar Named Desire, All My Sons, Who’s Afraid Of Virginia Woolf?, Peter Pan, Les Liaisons Dangereuses, Warhawks and Lindberghs, Holy Ghosts, Judgment at Nuremberg, Requiem for a Heavyweight, The Whaleship Essex, Meet John Doe, The Lower Depths, Escape From Happiness, Real Classy Affair, Rocket to the Moon, Anna Karenina and Brilliant Traces. He has directed over 75 plays, among them The Master & Margarita, Marriage Play, The Diviners, A Midsummer Night’s Dream, Macbeth and Hamlet. He is an Associate Artist at TimeLine Theatre, where he directed Frost/Nixon, Awake And Sing!, The General from America, Lillian, Copenhagen, It’s All True, Pravda, Paradise Lost, A House With No Walls, The Apple Family Plays and The Price. He has also worked at The Goodman Theatre, Steppenwolf Theatre, Strawdog Theatre, Theatre at the Center, Buffalo Theatre Ensemble, Provision Theatre, Eclipse Theatre and American Theater Company. He is a twelve-time Jeff nominee and has received seven Jeff Citations, as well as an After Dark Award. He teaches part-time at The Theatre School/DePaul University where he received his MFA in Directing.