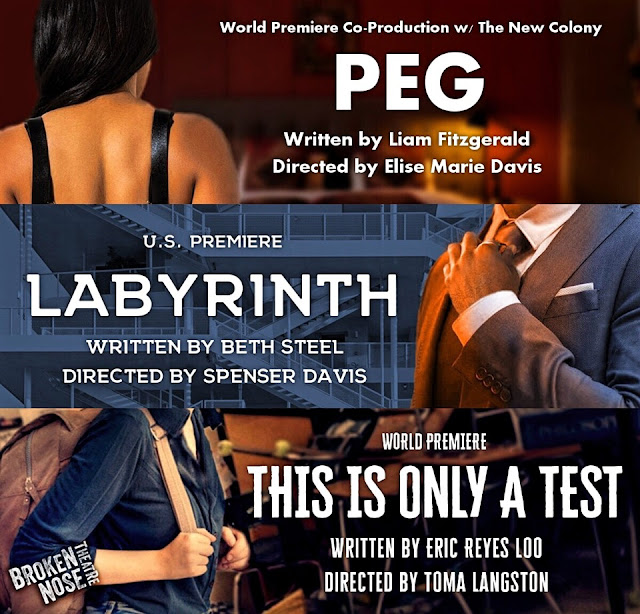 World Premiere!
THIS IS ONLY A TEST
By Eric Reyes Loo
Directed by Toma Langston 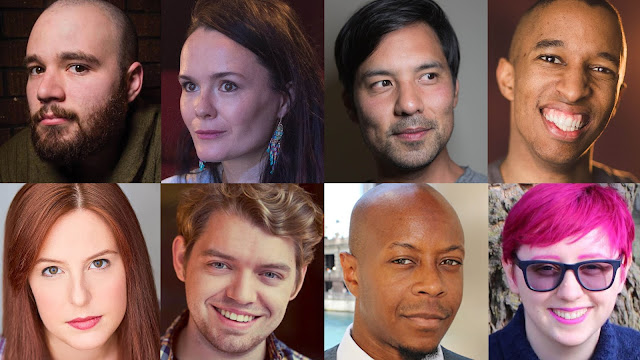 Broken Nose Theatre is pleased to announce its Eighth Season, exploring the theme “Change the Rules,” with two world premieres and one U.S. premiere to be presented at BNT’s resident home, The Den Theatre, 1331 N. Milwaukee Ave. in Chicago’s Wicker Park neighborhood.

Next winter, the 2019-20 season continues with the U.S. premiere of Beth Steel’s propulsive financial drama LABYRINTH, directed by Spenser Davis.

In spring 2020, BNT presents the world premiere of Eric Reyes Loo’s terrifyingly timely drama THIS IS ONLY A TEST, directed by Toma Langston.

The season concludes next summer with BECHDEL FEST 8, BNT’s annual feminist festival, featuring a full slate of new short plays with all female-identifying casts. Playwrights, directors and casting will be announced in 2020.

During its eighth season, BNT will also provide institutional support to two outside playwrights through The Paper Trail – its new play development program. This season’s playwrights include Cassandra Rose and Michael Turrentine.

Comments Artistic Director Elise Marie Davis, “As conversations around concepts like gender roles, class divides and gun safety continue on a national scale, the rules regarding how and when we talk about these issues are also changing. With this upcoming season – my second as Artistic Director – the Broken Nose family is thrilled to bring two world premieres and one U.S premiere to Chicago audiences, stories that illustrate the ways in which societal limits are tested and reset, with a variety of outcomes. Along with these three mainstage productions will be our eighth annual Bechdel Fest and two playwrights whose new work we'll be developing over the course of the season, making this one of our most ambitious years yet. We'll see you at the theater!”

Tickets for all Broken Nose Theatre productions are available on a “pay-what-you-can” basis, allowing patrons to set their own price and ensuring theatre remains economically accessible for all audiences. Tickets for all productions will go on sale at a later date. For additional information, visit www.brokennosetheatre.com.

Peg is excited. Steve is nervous. Sure, they've opened a nice bottle of wine, dinner smells delicious... but the brand-new strap-on they ordered has just arrived, and tonight's plan is to flip the script. Peg wants to peg Steve. And even though he was all for it initially, his last-minute hesitation will force this ordinary couple to face their kinks, quirks and societal conditioning, as they're quickly reminded that gender politics follow them everywhere - including the bedroom.

New York City, 1978. Having just landed his dream job as a Wall Street banker, John Anderson finds himself swept off on luxurious trips to Latin America with only one goal: selling loans to the region’s developing nations eager to borrow. But as the banks’ excessive lending strategy starts pushing whole countries toward the brink of bankruptcy, and the biggest credit bubble in history threatens to burst, John and his colleagues must come to terms with the true price of chasing their fortunes.

Nowadays, it could happen anywhere, at any time, and the faculty at Washington High have decided to take "being prepared" to a whole new level: through a series of cutting-edge Active Shooter Drills, their students will be trained on how to fight back, just in case their school is the next to hit the news cycle. But as they’re asked to quell violence by responding violently, four teenagers begin to wonder: if we’re so prepared, why do we feel even more unsafe?

BNT'S perennial favorite feminist festival returns! As with the past seven iterations, BECHDEL FEST 8 will feature an ensemble of female-identifying and nonbinary artists performing new short plays written and directed by some of Broken Nose's favorite artists – and all passing the Bechdel-Wallace Test. Created by cartoonist Alison Bechdel, the Bechdel Test asks whether a work of entertainment features two non-male characters talking about something other than men. Playwrights, directors and casting to be announced in 2020.

Liam Fitzgerald (Playwright, Peg) is a Chicago-based writer, director and producer. He holds a BFA from the University of Miami and an MFA from Northwestern University. His work has been performed and developed in Chicago and nationally with theaters including Stage Left, Broken Nose Theatre, Chicago Dramatists, Theatre Masters and the Campfire Theatre Festival. He is a resident designer at Links Hall and has worked for the production departments of Chicago Children’s Theatre, Red Theatre, Theatre Wit, Strawdogs, Pegasus Players, Chicago Dramatists and WildClaw theatre.

Elise Marie Davis (Director, Peg) is entering her second year as Artistic Director of Broken Nose Theatre, where she has performed in the award-winning productions of Girl in the Red Corner, Plainclothes and At The Table, as well as My First Time, several iterations of Bechdel Fest, and her own play A Phase. She is also an ensemble member with The Factory Theater, where she was onstage for the world premieres of Adventures of Spirit Force Five and Zombie Broads. Other Chicago acting credits include Blue Stockings (Promethean Theatre), Baby With the Bathwater (Eclipse Theatre), Pine (Uncommon Ground), Hot Pink (New American Folk Theatre), Kin Folk and Here After (The New Colony), A Funny Thing… (Route 66, u/s), Speech & Debate (Brown Paper Box), as well as work with Lyric Opera, Strawdog, Artemisia, Midsommer Flight, American Blues and Pride Films and Plays, among others. She recently appeared in Squid, a short-form comedy series now released on Amazon Prime. As a playwright, she has had her work performed at Steppenwolf 1700, First Floor Theater, Broken Nose and Arc Theatre, while her play A Phase has been taught at the University of Chicago. She is represented by Big Mouth Talent Agency.

Beth Steel (Playwright, Labyrinth) is U.K.-based playwright. She was awarded the Charles Wintour Award for Most Promising Playwright at the Evening Standard Theatre Awards. Her first play Ditch premiered at the HighTide Festival, transferred to the Old Vic Tunnels and was shortlisted for the John Whiting Award. Wonderland, Steel's critically acclaimed second play, was directed at Hampstead Theatre by Edward Hall; it was broadcast live worldwide through the Guardian website and was a finalist for the Susan Smith Blackburn Prize, an award for best new play in the English language by a female playwright. Labyrinth is her third play; it had its world premiere at Hampstead Theatre in 2016, with Anna Ledwich directing. This marks the play's U.S. premiere.

Spenser Davis (Director, Labyrinth) is Director of Programming for Broken Nose Theatre, where his directorial credits include At The Table (Jeff Awards – Best Director, Production, Ensemble), his own play Plainclothes (Jeff Award – Best Ensemble), A Phase, From White Plains and several iterations of Bechdel Fest. Other credits include Blue Stockings (Promethean Theatre); May the Road Rise Up and Adventures of Spirit Force Five (The Factory Theater, ensemble member); Bachelorette (Level 11); the upcoming world premiere of Under The Tree with The New Colony; as well as readings, workshops and festivals with American Blues Theater, A Red Orchid, Hell in a Handbag, ATC, Strawdog, Otherworld, First Floor and Pride Films and Plays, to name a few. As a playwright, his play Plainclothes received the 2019 M. Elizabeth Osborn Award from the American Theatre Critics Association and was named a finalist for the 2019 Harold and Mimi Steinberg/ATCA New Play Award. He is currently adapting his first play Merge as a pilot for television. He is a series writer-director on Squid, a short-form comedy series on Amazon Prime. He is proud to be represented by William Morris Endeavor.

Eric Reyes Loo (Playwright, This is Only a Test) is a Los Angeles-based playwright and television writer. He writes for the upcoming Netflix series A.J. & the Queen. Eric’s plays have been developed at LA theatres including Rogue Machine, Moving Arts and East West Players. Eric helps run new play development at Chalk Repertory Theatre, where he is also a company member. His play, Death and Cockroaches was produced by Chalk Rep in Fall 2018. Eric received an MFA in Dramatic Writing from NYU’s Tisch School of the Arts and attended undergrad at Santa Clara University. His mother would want you to know that he’s a product of a prestigious Jesuit education.

Toma Langston (Director, This is Only a Test) is a freelance theater director. Theo Ubique Cabaret Theatre: Hedwig and The Angry Inch. The New Colony: The Light (2018 Joseph Jefferson Nomination for Director – Play). Victory Gardens: 2015 Directors Inclusion Initiative Director Fellowship (Assistant Director) Sucker Punch. Jackalope Theatre: (Assistant Director) 1980 (or Why I’m Voting for John Anderson). Sideshow Theatre: (Assistant Director) truth and reconciliation and Give It All Back. Other directorial credits include The Last Five Years, The Shadow Box, For Colored Girls Who Considered Suicide/When the Rainbow Is Enuf. 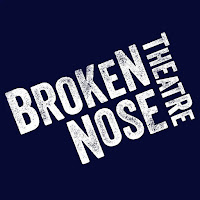 Broken Nose Theatre is a Pay-What-You-Can theatre company. Founded in 2012, BNT was the 2018 recipient of the Emerging Theater Award, presented by the League of Chicago Theatres and Broadway in Chicago. The company has produced and developed 20 full-length plays (including 12 Chicago or world premieres) and over 50 new short plays through our annual Bechdel Fest. We strive to spark conversation, cultivate empathy, and amplify underrepresented voices, and are committed to making new, exciting and relevant theatre that is economically accessible to all audiences. For more information, please visit www.brokennosetheatre.com.

Posted by Bonnie Kenaz-Mara at 10:59 PM No comments:

Email ThisBlogThis!Share to TwitterShare to FacebookShare to Pinterest
Labels: Bechdel Fest, Broken Nose Theatre, Labyrinth, PEG, save the dates, Season Announced, shows on our radar, Theatre Chicago, This Is Only A Test
Older Posts Home
Subscribe to: Posts (Atom)