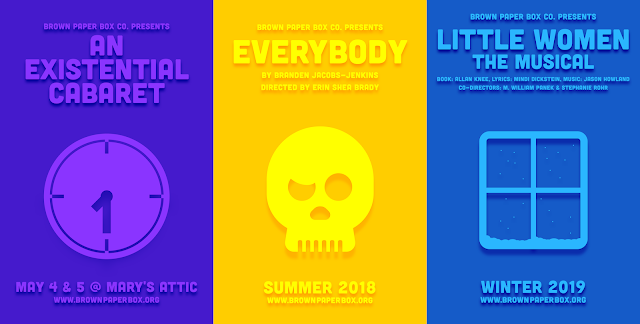 Although I didn’t understand the purpose of the “roles” in the shows, I learned a couple interesting facts from the “Existential Cabaret” by Brown Paper Box Co. on Saturday May 5. Comedian Rachel Reiman informed the audience that she “lost custody of her strap-on” after a breakup with her partner, and “that’s $130 I will never get back.” So I learned what a strap-on would set me back. Thanks, Rachel. Saves me a trip to the Pleasure Chest.

Rachel also had a great bit about how country music should have songs about two lesbians who move in together after two weeks and then have a “long, tumultuous six month breakup.” (Like the old joke a gay friend told me,”What does a lesbian bring on her second date? A moving van.”)

Another cool fact I learned was how much I need to see some of the new musicals emerging from Broadway. I bought my tickets for the touring production of Waitress, but wish I could have heard the song “When He Sees Me,”  more clearly the other night. I also thought the duet from

SpongeBob Squarepants, The New Musical, “I Guess I’ll Miss You,” was very sweet. Informed they are Friends in Real Life, Emilie Modaff and Ben Kaye (in his bright yellow-SpongeBob-like suit) were adorable in their rendition. They had a cute rapport onstage together.

The talented Emilie Modaff stated before the Requiem song, from Dear Evan Hansen, “We’re going to sing it, and you should cry.” Hostess Kristi Szczepanek and Anna Schutz did a lovely job harmonizing on “I Will Never Leave You” from Side Show.

Two standouts in the lineup were original songs. Hannah Starr sang “Freeze” from her show BOOMBOX. The song explains how the character is bored during an improv game of “Freeze,” while her cast mates prattle on, and she debates when to join in. (Having witnessed a lot of Second City sketches recently with my daughters doing “Afterschool Matters,” I could really relate to this dilemma.)

The other truly memorable, talented performer was Nire Nah, armed with a blue-green guitar and a poignant, raw, honest song called “Open Your Mouth” about overcoming addiction and depression. Her lyrics were simple but powerful: “I’m not a writer, not a fighter. Wish I was brighter.” She is a writer and a lovely songstress to watch.

The overall show was a bit uneven. As my companion remarked,”Did you get the impression there were a lot of inside jokes we didn’t get?” Yes. This was especially evident during the second comedian’s segment. The audience was howling, but we were lost.

The cabaret ended on an awesome note, literally. Alex Madda sang “The Wizard and I” from Wicked. She brought the house down.

“An Existential Cabaret” was a short, two day run, May 4 & 5. Save the dates for the Regional Premiere of EVERYBODY July 13th through August 12th.

Following their Jeff Recommended run of They’re Playing Our Song and the Chicago Reader Recommended Speech & Debate, Brown Paper Box Co. is proud to announce its 2018/2019 season. With an exciting regional premiere fresh out of New York - cast by lottery each night live on stage, a Chicago storefront chamber musical premiere, a new cabaret at Mary’s Attic in Andersonville, and a Spring 2019 Special Event to be announced soon, BPBCo.’s upcoming season has a little bit of something for everyone & everybody.

Stephanie Rohr (Co-Director) has worked with BPBCo. as director of Spike Heels, assistant director of A New Brain, and coordinator for Spring Forward Fail Back cabaret. She has performed with BPBCo. in Godspell, Aloha Say the Pretty Girls, and [title of show]. Stephanie holds a BFA in Musical Theatre from Drake University and an MA in Classical Acting from Drama Centre London. She made her West End debut in Opera Up Close's Olivier Award winning production of La Boheme, and also performed at the Roundhouse Theatre and the Barbican Centre in London. Chicago credits include: High Fidelity (Refuge Theatre), Macbeth, Reservoir Dogs, and Predator: The Musical (Roundhouse Productions), Two Gentlemen of Verona (Spectralia Theatre), Jesus Camp (Cornservatory), Perfect Wedding and Secrets of a Soccer Mom (Towle Theater), and No Sex Please, We're British (JPAC). Stephanie also works as a private vocal coach, sings with The Moxie Sisters and The Bangers, and is a fiber artist and cross-stitch designer. (StephXstitch.com)