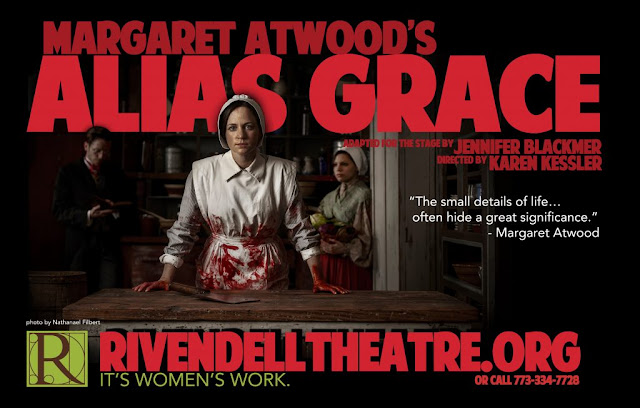 *This production of Alias Grace replaces the previously announced Cal in Camo, which will now be presented in January 2018.

A world premiere adaptation of Margaret Atwood's acclaimed novel Alias Grace takes a look at one of Canada's most notorious murderers. In 1843, 16-year-old Grace Marks was accused of brutally murdering her employer and his housekeeper. Imprisoned for years, Grace swears she has no memory of the killings. A doctor in the emerging field of mental health arrives to try to find out the truth of the matter. Alias Grace is a fascinating study of memory, culpability, and the shadowy spaces within the human mind.

This play was originally developed in collaboration with the Department of Theatre and Dance at Ball State University (http://cms.bsu.edu).

Following the success of Atwood’s The Handmaid’s Tale on hulu, Alias Grace has been adapted into a six-part miniseries to debut this fall on Netflix. The miniseries was adapted and produced by Sarah Polley (Away From Her), directed by Mary Harron (American Psycho), and features Anna Paquin. 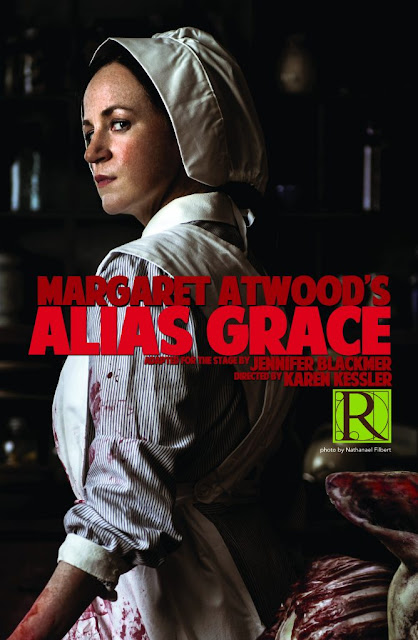 About the Artists
Karen Kessler (Director) is returning to Rivendell Theatre, a company she was helped found. She is a member of the ensemble at A Red Orchid Theatre where she most recently directed a production of Jennifer Healy’s The Nether. Among Karen’s directing credits are: Wrens (1996 and 2012), The Trestle at Pope Lick Creek, Hamlet, and Ten Tiny Fingers, Nine Tiny Toes at Rivendell; Solstice, Blasted, Gagarin Way, and Mr. Kolpert at Red Orchid; A Number, God of Hell, Into the Woods, and War at other theatres around Chicago; Glengarry Glen Ross at the Northern Stage Ensemble in Newcastle, UK; Macbeth, Scapin, The Three Musketeers, A Midsummer Night’s Dream, The Taming of the Shrew and All’s Well That Ends Well at the Illinois Shakespeare Festival. Karen is a professor of Directing and Shakespeare at Ball State University.

Jennifer Blackmer (Playwright) is the 2015 PEN/Laura Pels International Foundation for Theatre Award winner for Emerging American Playwright. Her plays have been seen in New York, Los Angeles, Chicago, Minneapolis, Indianapolis, Berkeley and St. Louis, and include Human Terrain, Unraveled, Alias Grace, Delicate Particle Logic, and Borrowed Babies. In 2016, Jennifer’s screenplay for Human Terrain won the prestigious Alfred P. Sloan Foundation prize through the Tribeca Film Institute, and the film is currently in pre-production. Jennifer has also been a finalist for the Sundance Film Institute Sloan Prize, the David Charles Horn Prize for Emerging Playwrights, the Fratti-Newman Political Play Contest, the Firehouse Festival of New American Theatre, and The O’Neill National Playwrights’ Conference, and her writing has been short-listed for both the Princess Grace Award and the Shakespeare’s Sister Fellowship. Her work has been developed by Seven Devils, Illinois Shakespeare Festival, The Playwrights’ Center, The Lark and Activate Midwest. Jennifer is a Professor of Theatre and Associate Provost for Entrepreneurial Learning at Ball State University.

Steve Haggard (Simon Jordan) most recently appeared at Rivendell as Evan in Winter. Chicago credits: 3C, Sender, The Mutilated, Accidentally Like A Martyr, The Aliens, Kimberly Akimbo and The Mandrake (A Red Orchid Theatre) Tribes (Steppenwolf); Doubt, Old Glory, The Subject Was Roses, and Our Town (Writers’); Funnyman, Season’s Greetings, and She Stoops to Conquer (Northlight); Wasteland (Timeline); King Lear, As You Like It and Romeo and Juliet (Chicago Shakespeare). Regional Credits: Arcadia, R+G are Dead, Two Gentlemen of Verona, The Tempest, Hay Fever, Comedy of Errors, and Ah Wilderness (American Players Theatre); Almost Maine (Milwaukee Repertory) and Fallen Angels (Indiana Repertory). Steve has appeared in Chicago Fire, Prison Break and several national commercials. He is an ensemble member of A Red Orchid Theatre and a graduate of The Theatre School at DePaul University.

Maura Kidwell (Nancy Montgomery) is making her Rivendell debut in Alias Grace. In her eleven years acting in Chicago, Maura has enjoyed working on stage at Theatre Wit, The Gift, Erasing the Distance (ensemble member), and Court Theatre, on television in the series' Sirens, Chicago Fire, Chicago Justice, Mind Games and Boss, in various films including Canal Street ET and Tim Kasher's debut feature No Resolution, and as an on-camera instructor at Vagabond School of the Arts.

Jane Baxter Miller (Mrs. Humphrey) is a member of Rivendell Theatre Ensemble. RTE credits include American Wee-Pie; Falling; A Wake; Self-Defense, or the death of some salesmen; Silence; Faulkner's Bicycle; The Secret Diary of Adrian Mole, Aged 13 ¾; and WRENS. Additional Chicago credits include Dandelion Wine with Chicago Children’s Theatre; The Love Song of J. Robert Oppenheimer with Next Theatre; Mr. Kolpert with A Red Orchid Theatre; The Irish and How They Got That Way at the Mercury Theatre, Cowgirls with Northlight Theatre and Pump Boys and Dinettes at Theatre at the Centre. Her film credits include NBC's Chicago Justice and an upcoming Captive State feature film. Jane is a singer and songwriter appearing on numerous recordings through Bloodshot Records. She composed the children’s musical Dirty Cowboy (with follow RTE ensemble member Victoria DeIorio) for Lifeline Theatre. Her critically acclaimed solo recording, Harm Among the Willows, is available through Bloodshot Records and iTunes.

Ayssette Muñoz (Mary Whitney) is an ensemble member with Teatro Vista, where her credits include Wolf at The End of the Block; In the Time of the Butterflies; Between You, Me, and the Lampshade; Romeo & Juliet; and A View from the Bridge. Additional Chicago credits include Ah, Wilderness; Marisol (Goodman Theatre) and understudying in Short Shakes! Romeo & Juliet (Chicago Shakespeare Theatre). Regional credits include The Comedy of Errors; Richard III (Notre Dame Shakespeare Festival). Television credits include Chicago P.D. and she was featured as one of the Chicago Tribune’s “Top 10 Hot New Faces of Chicago Theatre” in 2015.

Ashley Neal (Grace Marks) is an RTE ensemble member and has appeared in many productions including: WRENS, 26 Miles, The Walls, Be Aggressive, and others. Ashley most recently appeared in A Red Orchid Theatre’s The Nether where she also appeared in A Red Handed Otter. Other shows you may have seen her in include: London Wall, Men Should Weep and Stage Door with Griffin Theatre, The Life and Sort of Death of Eric Argyle with Steep Theatre, as well as work with Chicago Dramatists, Pine Box, Irish Theatre Company, Step Up, Jackalope Theatre, Victory Gardens, Strawdog, The Greenhouse Theatre, and others. Ashley is a graduate of Columbia College Chicago and The School at Steppenwolf.

Amro Salama (Jerimiah / Jerome Dupont) is making his Rivendell Theatre debut. His theatre credits include Yasmina's Necklace, the 2016 Jeff Award nominee for Best New Work at 16th Street theatre. Additional Chicago theater credits include the Goodman Theatre where he will be reprising his role in Yasmina's Necklace this fall at the Goodman Theatre. He has performed in numerous play readings at Silk Road Rising and Dramatists. Regional credits: St. Louis: Mustard Seed Theatre; Los Angeles: Cornerstone Theatre, Pacific Resident Theatre, The Hudson Theatre and ACME; NYC: (Off Broadway) Theatricum Botanicum with the premiere of the 2004 Pulitzer Nominated Omnium Gatherum. TV Credits include: Recurring role on the upcoming TV show The Chi for Showtime. Past TV and Film includes: Chicago PD, Shameless, Modern Family, Law and Order, Children's Hospital and Suite Life on Deck.

Drew Vidal (Thomas Kinnear) is returning to Rivendell, having started there as a Fight Director on Silence. Coming up in Chicago, Drew appeared on stage with Famous Door, The Hypocrites, Defiant, Boxer Rebellion, Red Hen, Collaboraction and Tin Fish, among others. More recently, acting credits include The Glass Menagerie (Jim) at Human Race, The Book Club Play (Rob) at KU Rep, Angels in America (Joe) at Ball State, and The Three Musketeers (D’Artagnan) at Illinois Shakespeare Festival; and as a Fight Director, Solstice at A Red Orchid, Water by the Spoonful at Off Square Theatre Company, and Holes at Indiana Repertory Theatre.

Pay What You Can: Five seats (10% of the house) are available for each performance. Reservations are made on a first come first served basis.
Subscriptions: $59-$80 for 3-plays

Parking and Transportation: Free parking is available in the Senn High School parking lot (located a block and a half from the theatre behind the school off Thorndale Avenue). There is limited paid and free street parking in the area and the theatre is easily accessible via the Clark (#22) or Broadway (#36) bus, and is a short walk from the Bryn Mawr Red Line El station.

Posted by Bonnie Kenaz-Mara at 2:09 PM No comments: