EXTENDED: HOW TO BE A ROCK CRITIC AT STEPPENWOLF’S LOOKOUT SERIES 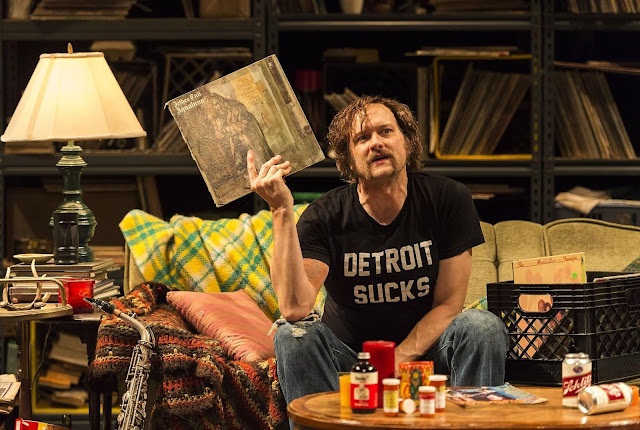 By popular demand Steppenwolf’s LookOut Series extends its rock ‘n’ roll production of the solo play, How To Be A Rock Critic (Based on the Writings of Lester Bangs) by award-winning theatre artists Jessica Blank and Erik Jensen, starring Erik Jensen (The Walking Dead, Mr. Robot) as Lester Bangs and directed by Jessica Blank (Made in Jersey, The Namesake). Described as “a fascinating window into one of the last century's most compelling and fearless critics,” (Chicago Tribune), the 90-minute production continues for three additional performances through July 29, 2017 in the 1700 Theatre, situated behind Front Bar: Coffee & Drinks (drinks permitted in the theater).

Performances in the regular schedule are Thursdays at 8pm, Fridays at 8pm and Saturdays at 3:30pm and 8pm. Tickets ($30) to the additional performances of How To Be A Rock Critic on sale Saturday, July 15 at 11am through Audience Services (1650 N Halsted), 312-335-1650 or steppenwolf.org.

Added performances of How To Be A Rock Critic include:

America’s greatest rock critic, gonzo journalist and inventor of the word “punk,” legendary music writer Lester Bangs was an American icon. Outsized, manic, fucked-up and impossibly creative, Lester traveled with some of the most iconic musical figures of the 20th century—The Clash, Bob Marley, Lou Reed— peeling away the veneer between “star” and audience and revealing the “greats” as flawed and failing humans. He was at once irreligious and messianic about his hopes for the future, humanity in general, and music in particular. Music could save the world. At least that’s what you tell yourself when you start out. But when the ragged, rebel ethos of the seventies gave way to the corporate pop of the eighties, Lester lost the myth he’d built a life around, and died of a drug overdose in 1982.

This solo play by Jessica Blank and Erik Jensen (award-winning writers of The Exonerated and Aftermath) adapts Lester’s own writing to chart the life, work and death of one of the 20th century’s most ground-breaking, risk-taking, pioneering voices.

Each evening show in the regular run is followed by legendary Chicago area musicians playing some of Lester Bangs’s personal favorite songs and artists. This weekend will feature The Lester Bangs Memorial Tribute Band with Jim DeRogatis (July 13-15), followed by David Singer & The Sweet Science (July 20-22). Saturday matinees on July 15 & 22 will be followed by discussions with music critic and Lester Bangs biographer Jim DeRogatis and the artists.

Lester Bangs was a rock critic who reached iconic status in the 1970s with his passionate, intellectually honest writing in books and publications such as Rolling Stone, Creem, The Village Voice, Penthouse, Playboy and others. He spent time with and wrote about the 20th century’s greatest musicians, including The Clash, Bob Marley, Lou Reed, Paul McCartney, Blondie, Iggy Pop, The Ramones and many more. He was born in Escondido, California on December 14, 1948, and he died in New York City on April 30, 1982.

Jessica Blank (Co-writer and Director) co-wrote the play Liberty City with April Yvette Thompson and directed its Off-Broadway production at New York Theater Workshop (Lucille Lortel, Drama Desk, and Outer Critics Circle nominations). Her second novel, Karma for Beginners, was published by Hyperion in 2009 and her third is forthcoming from Penguin in 2018. As an actor, Jessica appeared regularly as the lead’s loudmouthed big sister in CBS’ Made in Jersey. Additional TV credits include the pilot of High Maintenance for HBO, Blue Bloods, Elementary, The Following, The Mentalist, Bored to Death, Rescue Me, Law and Order: CI, The Bronx is Burning, and several more. Film acting credits include The Namesake (dir. Mira Nair), The Exonerated, and several indies including Creative Control (SXSW Grand Jury Prize, 2015), On the Road with Judas (Sundance) and You’re Nobody Until Somebody Kills You (prod. Spike Lee). She has acted in theaters throughout New York City and has three new films coming out in 2017.

Erik Jensen (Co-writer and Performer) TV acting credits include major arcs on The Walking Dead and Mr. Robot, leads in the CBS pilot Second Sight, NBC pilot The Frontier and Fox TV movie Virtuality (dir. Peter Berg). He appeared as baseball legend Thurman Munson in miniseries The Bronx is Burning, and has made numerous recurring and guest appearances including The Americans, House of Cards, Turn, Elementary, Person of Interest, Major Crimes, Chicago PD, CSI, and many more. His film credits include Black Knight, The Love Letter, and over two dozen indies. Theater credits include the Pulitzer-Prize winning production of Disgraced at LCT3, The Good Negro at the Public, and Arthur Kopit’s Y2K and Terrance McNally’s Corpus Christi at MTC. His sci-fi graphic novel The Reconcilers was published in 2010 to wide acclaim.

How To Be A Rock Critic is presented as part of LookOut, Steppenwolf’s performance series that presents the work of artists and companies across genre and form. Emerging artists and performance legends, quintessential Chicago companies and young aspiring ensembles, familiar Steppenwolf faces and new friends. Steppenwolf Red Card and Black Card Members may use credits towards LookOut programming. The LookOut Series is presented year-round and announced on an ongoing basis. John Zinn, Greta Honold and Patrick Zakem are the producers for LookOut. For more information, visit steppenwolf.org/lookout.

Located in front of the 1700 Theatre is Steppenwolf’s café & bar, Front Bar: Coffee and Drinks. Open daily from 8am to midnight, Front Bar is a creative space to grab a drink, have a bite, or meet up with friends and collaborators, day or night. Front Bar serves artisanal coffee and espresso is provided by La Colombe and has a new menu with food prepared by Goddess and the Grocer. The menu focuses on fresh, accessible fare, featuring grab-and-go salads and sandwiches for lunch and adding shareable small plates and desserts for evening and post show service. More info at front-bar.com.