ChiIL Live Shows will be there... will you?! Check back with us early and often. Our full review will be up after the press opening on April 13th. 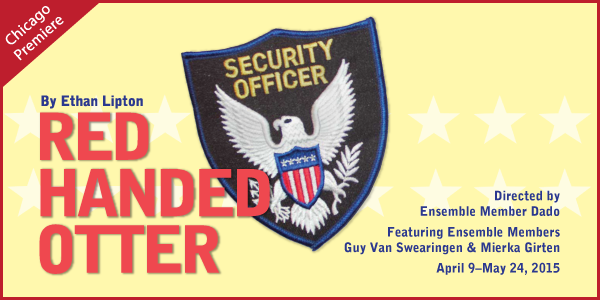 Not long ago, Paul had a girlfriend, a cat, and few complaints. Now? Well, at least he’s got his health. In between shifts at their security guard posts, Paul’s work buddies try to cheer him up. In this comedy by one of New York’s hottest emerging playwrights, Paul’s friends’ awkward (and hilarious) attempts to console him may just prove that some comforts only come on four legs.

About the Artists
Ethan Lipton (playwright)’s plays have been produced in New York, Los Angeles, Edinburgh, Boston, and Chicago (Luther at Steep). His Obie-Award winning song cycle No Place to Go premiered at the Public Theater’s Joe’s Pub in 2012 and was later produced by Two River Theatre (Red Bank, NJ) and the Gate (London). No Place to Go has since been presented in concert in more than 25 cities around the US and UK. Ethan was a member of the Public’s Emerging Writers Group and a Playwrights Realm Page One Fellow.  He is an associate artist of Clubbed Thumb and has received playwriting grants and commissions from NYFA, the NEA, Playwrights Horizons, NYSCA, True Love and Barrington Stage Company.  He has been a Kesselring nominee, a Kleban finalist and a Drama-Logue winner.  He has also worked with Elevator Repair Service (Gatz), Laurie Anderson and Matt Berninger.

Dado (Director) is an ensemble member at A Red Orchid Theater and appeared on stage earlier this season in Strandline. She directed Simpatico here and more recently A Night Out for AROT's Incubator series. Other A Red Orchid productions include Megacosm, The Unseen, The Hothouse, The Seahorse, Fastest Clock in The Universe, and The Grey Zone. Dado is a Maggio Fellow and directed Fahrenheit 451 for Steppenwolf's Youth series as well as Coyote on a Fence and High Life for Shattered Globe at Victory Gardens.  Dado directed and acted in Hellcab at Famous Door and has been seen on stage at Trapdoor in First Ladies and Overweight, unimportant: Misshape - A European Supper, at Steppenwolf in The Duel and Pot Mom, and on television in an episode of Chicago Fire, Early Edition, Missing Persons, Turks and was edited out of an episode of Cupid . On the big screen she has been seen in US Marshalls and Payback.  Dado received an MFA in Visual Art from the University of Chicago.

Mierka Girten (Estelle) is a member of the Artistic Ensemble at A Red Orchid where she was most recently seen in Mud Blue Sky, Trevor and Simpatico.  Off-Broadway, she was seen in Mistakes Were Made with Michael Shannon and Sam Deutsch, after doing the world premiere right here at home. Also at A Red Orchid: Abigail’s Party, Weapon of Mass Impact, The Meek, Kimberly Akimbo and The Treatment. Other Chicago credits include: her one woman show With or Without Wings and work with Rivendell Theatre Company, Roadworks, The Hypocrites, Strawdog Theatre, Appletree, Circle Theatre, Livebait, Illinois Theatre Center, Provision, and Cobalt Ensemble.  Mierka toured the country in The Secret Garden and has been heard nationally, as an announcer and jingle singer on many radio and television commercials. Film credits include: The Manson Family, The Lake at Evening and The Drunk. Mierka is the founder of The Mookie Jam Foundation, benefiting artists with Multiple Sclerosis - because she is a daily warrior against the disease.

Bob Kruse (Randy) makes his first appearance with A Red Orchid.  He has previously worked with Vintage Theatre, Strange Tree Group, Eclipse, Wildclaw, Victory Gardens, Steppenwolf Garage, The Gift and The House Theatre. Bob is a graduate of Circle in the Square.

Luce Metrius (Donald) made his A Red Orchid Theatre debut earlier this season in Accidentally Like a Martyr.  Other recent Chicago credits include All Our Tragic with The Hypocrites and Buzzer at The Goodman Theatre.  Luce understudied roles in Raisin in the Sun at TimeLine Theatre and was seen on stage in The March at Steppenwolf Theatre Company, Iphigenia at Next Theatre Company, and Romeo & Juliet at Crowded Tub Collective. Mr. Metrius received his BA in acting from of Chicago College of Performing Arts at Roosevelt University.

Ashley Neil (Angela) makes her A Red Orchid debut and is an ensemble member with Rivendell Theatre. She was most recently seen in The Life and Sort of Death of Eric Argile at Steep Theatre and before that in Men Should Weep with Griffin Theatre where she also did Stage Door.  Other Chicago credits include Reverb at Redtwist, 25 Saints with Pine Box, Living Newspaper at Jackalope and Christmas is for Fools with Step Up Productions.  With Rivendell Theatre Ashley has performed in Wrens, 26 Miles, The Walls, These Shining Lives and more.  Ashley is a graduate of the School at Steppenwolf and Columbia College.

Guy Van Swearingen (Paul) is an Ensemble Member and the founding Artistic Director at A Red Orchid Theatre, where he was last seen in Simpatico.  He has appeared in 14 other productions, including the World Premiere of The Opponent; first here at home and then in its remount Off-Broadway at 59E59th Theatre.  Guy has worked with many theaters in Chicago, including Steppenwolf, Lookingglass, Plasticene, Defiant Theatre, and Mary-Arrchie. Television credits include Chicago Fire, Underemployed, Detroit 1-8-7, The Beast, Gifted Hands: The Ben Carson Story, Early Edition and TURKS. Film: The Dilemma, Take Shelter, Janie Jones, Public Enemies, The Merry Gentleman, Mad Dog & Glory, The Negotiator, Ali, The Weatherman and Adam Rapp’s Blackbird.  Guy is also a Lieutenant for the Chicago Fire Department.

About A Red Orchid
A Red Orchid Theatre has served as an artistic focal point in the heart of the Old Town community of Chicago since 1993.  Chicago Magazine named Red Orchid Chicago’s Best Theatre Company of 2010. Over the past 22 years, its Resident Ensemble has welcomed into its fold an impressive array of award winning actors, playwrights and theatre artists with the firm belief that live theatre is the greatest sustenance for the human spirit. A Red Orchid is well known for its highly-acclaimed experimental and cutting edge productions. In addition to its professional season, the company also maintains an exciting youth programming wing.

Posted by Bonnie Kenaz-Mara at 4:19 PM No comments: