Saturday Night Fever at Drury Lane,  A Disappearing Number at Timeline, and


The Hard Problem at Court Theatre 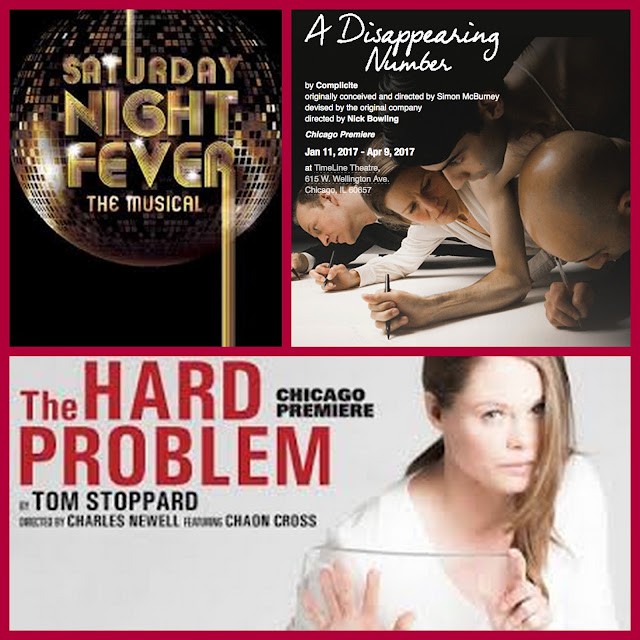 If you still haven't made it to these shows, it's your final chance. We caught the press openings of all 3, and they all made our highly recommend list. All must close this Sunday, April 9th. 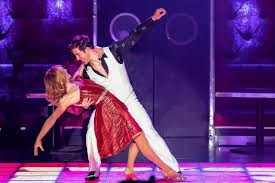 Drury Lane's Saturday Night Fever has been extended 3 weeks due to high demand, but it must close this Sunday. This new rewrite is a delight on stage and a welcome respite from the current exhausting political climate. Drury Lane's high energy production leaves everyone grinning, and harkens back to the disco days of the 70's with an instantly recognizable score. I'd forgotten the still timely pro-immigrant, pro-tolerance twist, the teen angst of changing blue collar neighborhoods, underemployment, and the trauma and drama of accidental death. As always, Drury Lane does a stellar job casting the best and brightest local talent.

We'll be back out on the 28th, for the press opening of Chicago, so check back soon for our full review.

Don’t miss out on the hottest ticket in town! This critically-acclaimed new version, rewritten for the Drury Lane stage, features music and lyrics by The Bee Gees, based on the smash-hit Paramount/RSO Film and the story by Nik Cohn, and adapted for the stage by Robert Stigwood in collaboration with Bill Oaks. This North American version was written by Sean Cercone and David Abbinanti and is helmed by Tony-nominated director and choreographer Dan Knechtges with musical direction by Roberta Duchak.

Alex Newell (Glee) joined the cast of Saturday Night Fever in the role of disco singer Candy. He stars alongside Adrian Aguilar as Brooklyn teen Tony Manero and Erica Stephan as Stephanie Mangano. Newell is an actor and singer best known for playing the transgender student Wade “Unique” Adams on the Fox musical series Glee. He has also appeared at the North Shore Music Theater and is a recording artist with Atlantic Records.

Based on the 1977 hit film, Saturday Night Fever follows Tony Manero in his attempt to escape his troubles by spending weekends at the local disco. Watch Tony win the admiration of the crowd, as well as his heartthrob Stephanie Mangano, as he burns up the dance floor with his electric moves. This new production features favorite Bee Gees songs from the movie such as “Night Fever,” "Stayin' Alive,” and "Jive Talkin’.”

To accommodate the extension of Saturday Night Fever, Drury Lane's electrifying new production of Chicago, featuring a book by Fred Ebb and Bob Fosse, music by John Kander, lyrics by Fred Ebb, and based on the play by Maurine Dallas Watkins, will now run April 20 – June 18, 2017. The Press Opening is Friday, April 28, 2017 at 8:00 p.m. This fiery new take on Chicago is directed by Drury Lane Theatre’s Artistic Director William Osetek with choreography by Jane Lanier, the Tony-nominated student of Bob Fosse.

Season and Subscription Information
Drury Lane Theatre’s 2017-2018 season will open with Chicago – the first professional Chicagoland production of the hit musical in 30 years. The season continues with the Pulitzer-winning play The Gin Game featuring Chicago theatre legends John Reeger and Paula Scrofano, followed by the powerhouse musical tribute to the 1980s Rock of Ages. For the holiday season Drury Lane will stage beloved tap classic 42nd Street and then close its 17-18 season with the iconic Tim Rice & Andrew Lloyd Webber musical Joseph and the Amazing Technicolor Dreamcoat. The 2017/2018 season runs March 30, 2017 through March 25, 2018 at Drury Lane Theatre, 100 Drury Lane in Oakbrook Terrace.

Subscriptions for the 2017 - 2018 Season are priced from $144.60 to $175.80. Subscribers receive special offers on dining, flexible ticket exchanges and early notification and priority seating for added events and concerts. For more information, visit DruryLaneTheatre.com. 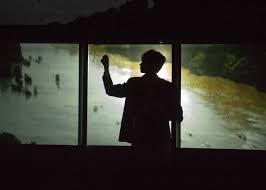 Timeline Theatre's A Disappearing Number and Court Theatre's The Hard Problem are both Chicago premieres with a scholarly bent, strong female protagonists, and psychological real world applications for the studies of academia. Let's hear it for the brainy blondes. Both shows have striking similarities and are thought provoking, multilayered explorations in human nature that are utterly compelling. Highly recommended. 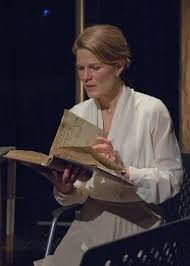 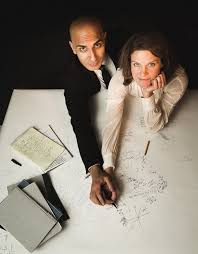 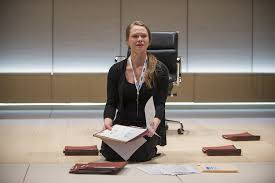 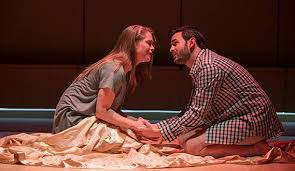 A Disappearing Number
If the thought of higher math classes gives you hives, never fear, you won't be called to the white board to solve equations. A Disappearing Number deals with the cool side of mathematics, too, like coincidence and synchronicity. As always, we recommend you come early and explore Timeline's lobby. They delve into the artistic side of math with fractals, math in art and architecture, optical illusions and more! We adored this production, based on a real life occurrence from 1913, expertly interwoven with the present day. 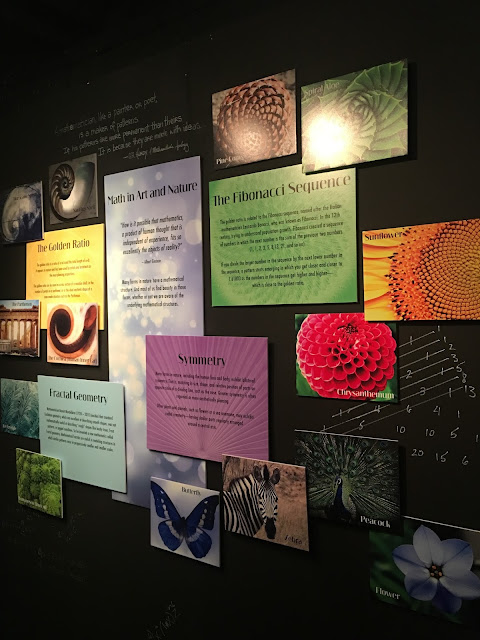 Check out more of my original photos of Timeline's lobby at the bottom of this feature.

“A mathematician, like a painter, or a poet, is a maker of patterns


… and beauty is the first test.”
The long-awaited Chicago premiere of this exquisite, internationally acclaimed play about love, math, and how the past and future connect. In 1913, a clerk in rural India named Srinivasa Ramanujan sends a letter to famed mathematician G.H. Hardy, filled with astonishing mathematical theorems. In the present, a math professor and a businessman fall in love. Told in a whirlwind of vignettes spanning history and time, A Disappearing Number is a love letter to numbers, blending the beauty of everyday relationships with the mysticism of the cosmos.
Winner of the 2007 Critics’ Circle Theatre, Evening Standard, and Laurence Olivier awards for Best New Play, TimeLine’s production is a new and rare staging of this mesmerizing play. 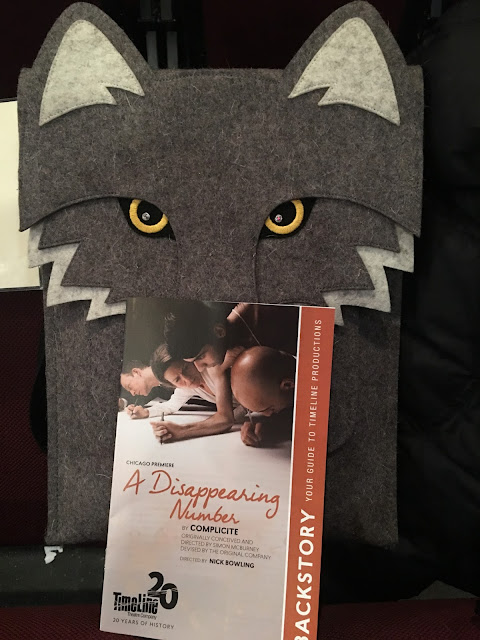 I don't want to give away any spoilers, because this production benefits from the mystery. Suffice it to say, there are some craftily wrought plot twists that make this drama a delight. Don't miss this. The Hard Problem is classic Tom Stoppard and a thrill to see. Kudos to Court Theatre for producing this Chicago Premiere.

ChiIL Mama's Adventures in Timeline's lobby
at A Disappearing Number: 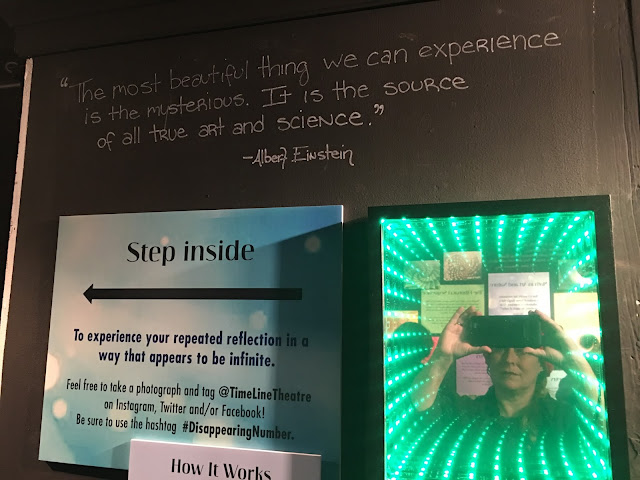 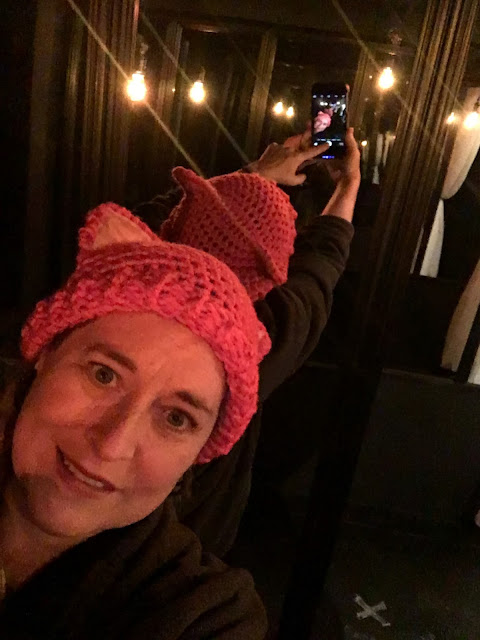 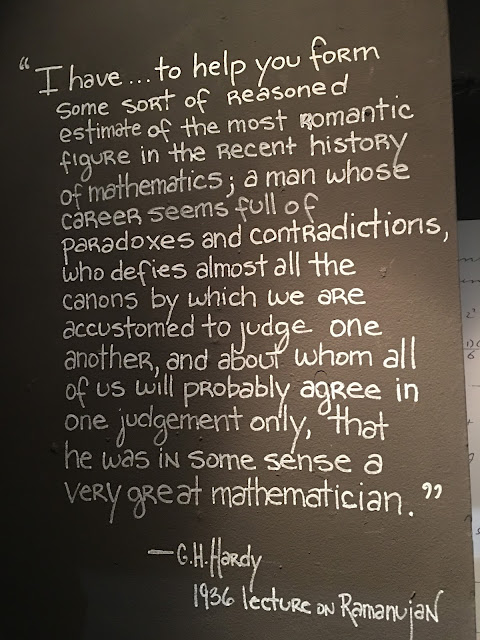 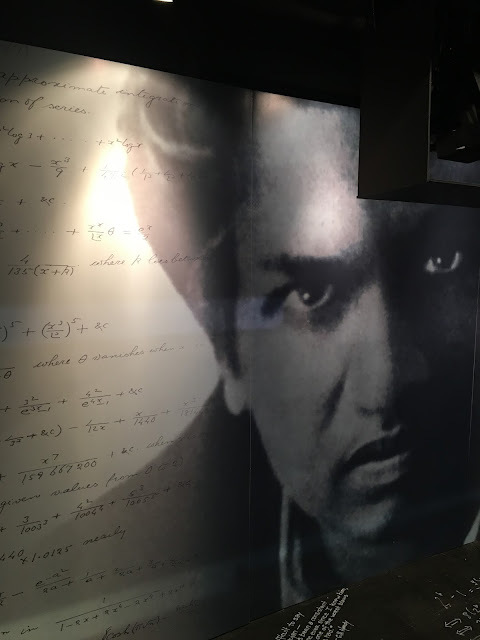 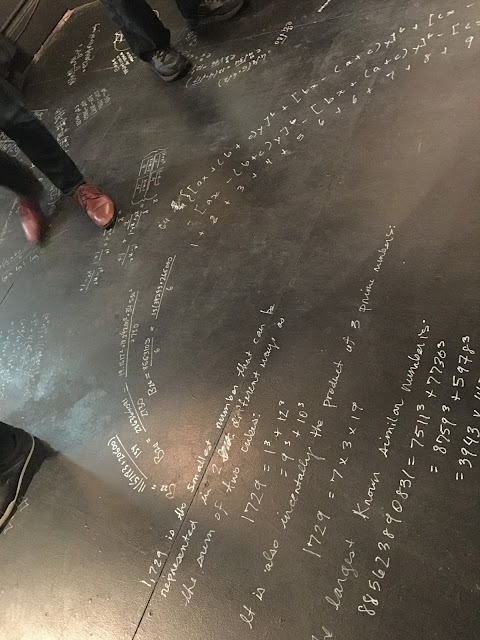 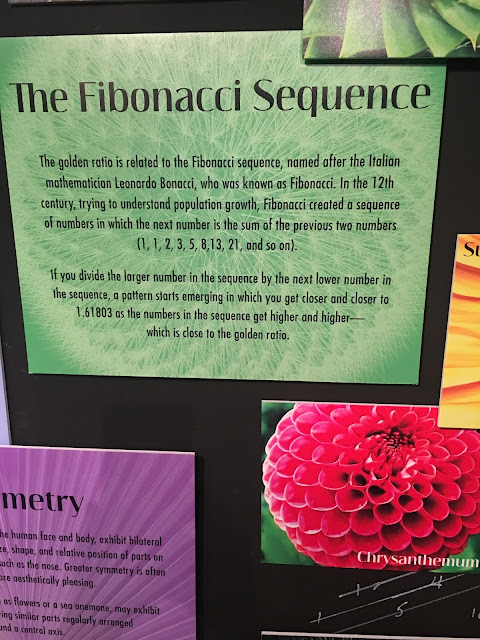 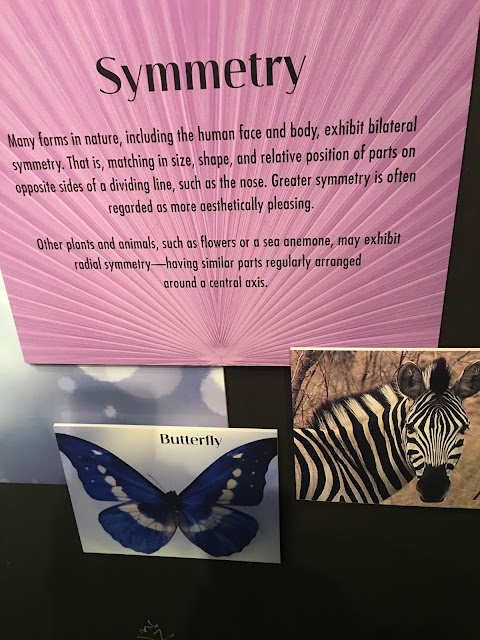 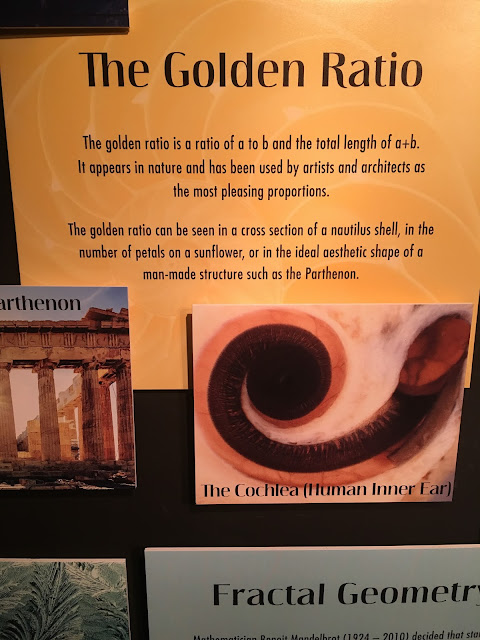 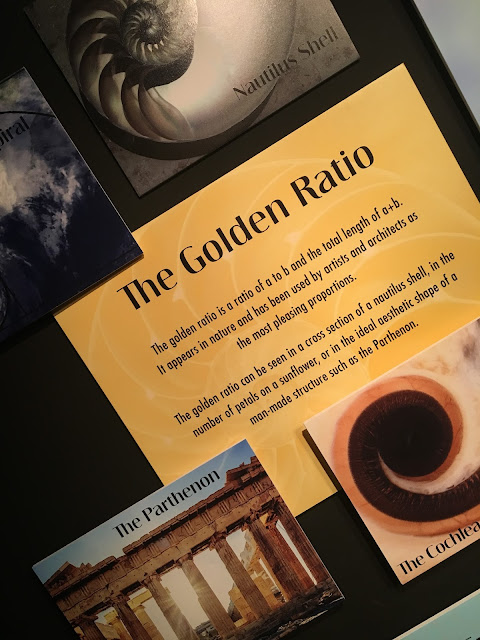 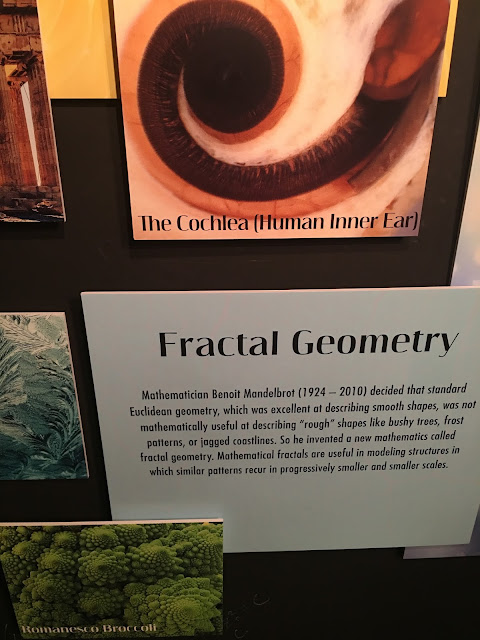 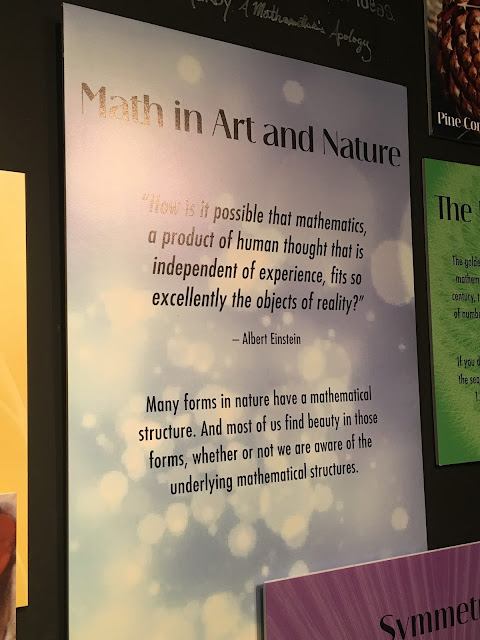 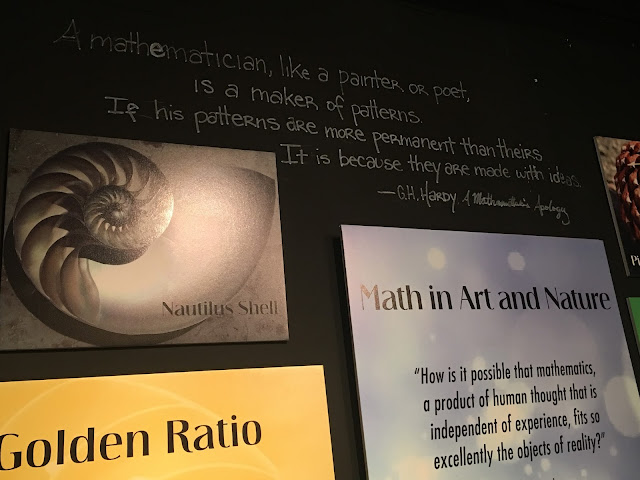 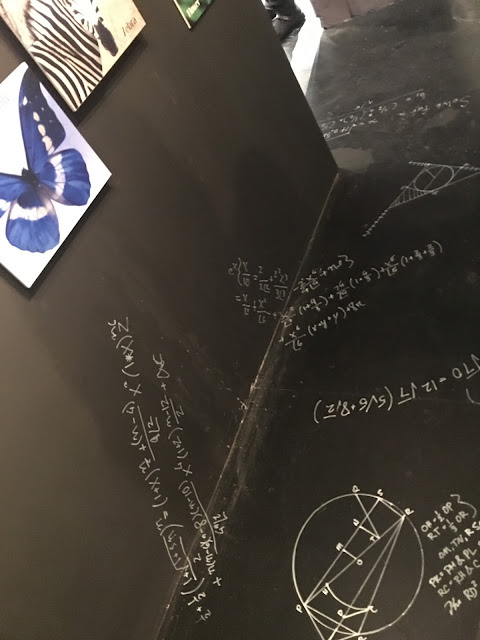 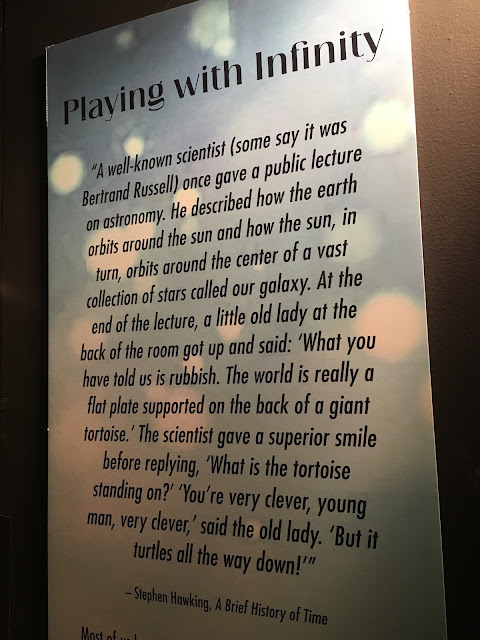 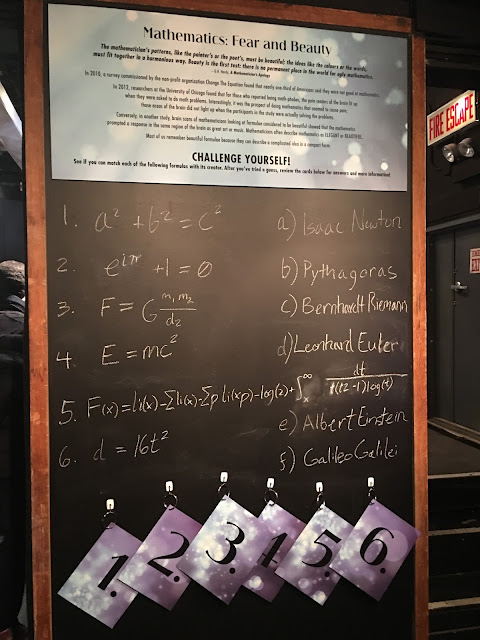 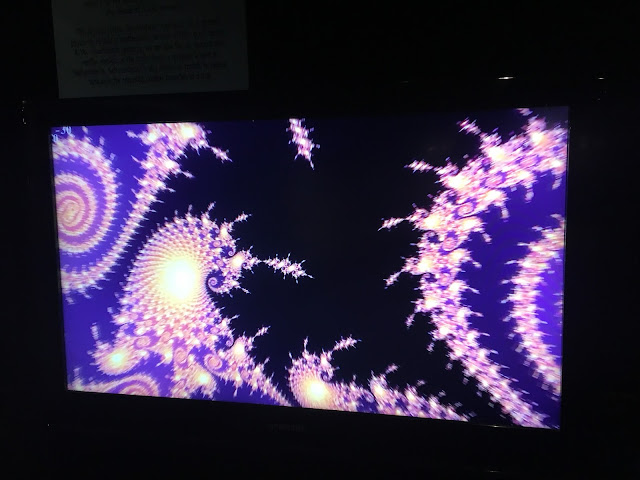 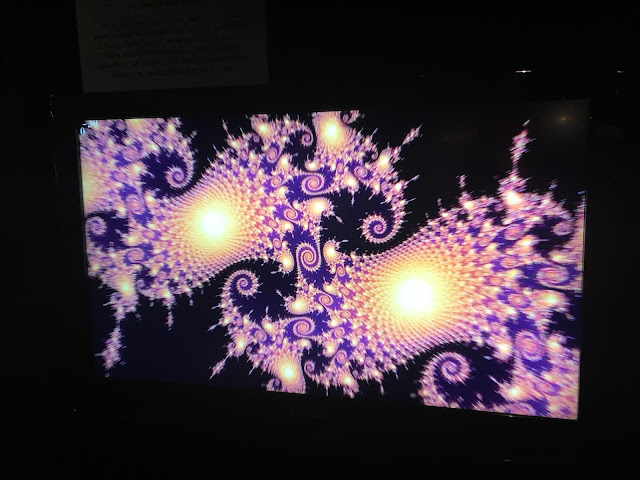 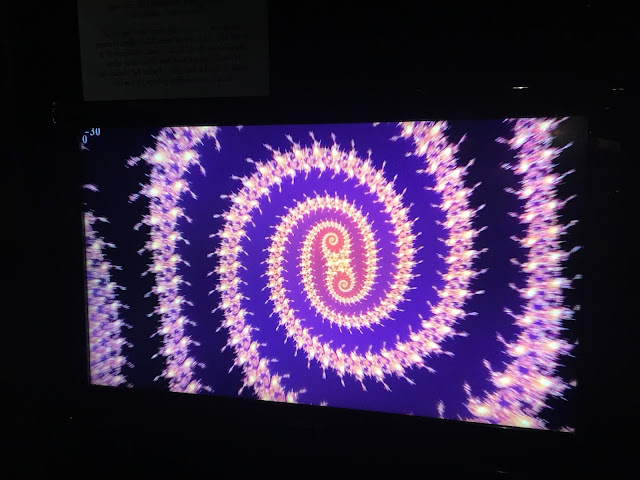