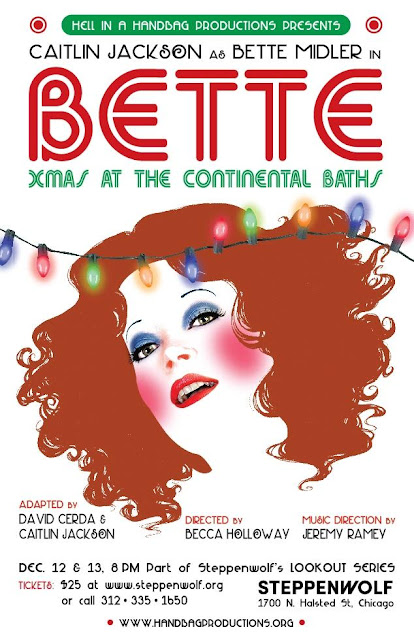 Hell in a Handbag Productions is pleased to bring back its steamy cabaret sensation – this time, with a holiday twist! Handbag diva Caitlin Jackson recreates Bette Midler’s historic concert at New York’s Continental Baths in BETTE, LIVE AT THE XMAS BATHS, playing two nights only, December 12 & 13, 2017 at 8 pm at Steppenwolf’s 1700 Theatre, 1700 N. Halsted St. in Chicago. Tickets, priced at $25, are available at www.steppenwolf.org or by calling (312) 335-1650.

With the inimitable Jeremy Ramey tickling the ivories as Barry Manilow, Handbag’s loving recreation of the beginning of Ms. Midler’s stellar career features the fabulous songs she sang for the boys in the bathhouse, including Chattanooga Choo-Choo, Superstar – plus holiday ditties done in Bette’s inimitable style. Directed by Becca Holloway, BETTE, LIVE AT THE XMAS BATHS also features Ed Jones as Mr. Gerald, bathhouse patron and hairdresser to the stars, and Sydney Genco and Allison Petrillo as her bawdy back-up broads.

It’s Christmas Eve at the Continental Baths…. can Bette, our reluctant holiday hero, spread some cheer to the holiday orphans that have gathered to see her? Join Bette, her go-to gals, Trixie and Laverne, and her loyal hairdresser, Mr. Gerald, for an evening of unmatched MARY-ment.

BETTE, LIVE AT THE XMAS BATHS is presented as part of Steppenwolf’s LookOut Series.