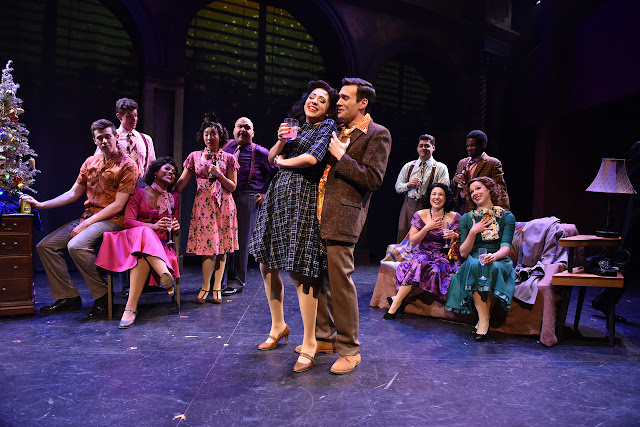 AT THE RUTH PAGE CENTER FOR THE ARTS,
OCTOBER 11 – DECEMBER 8 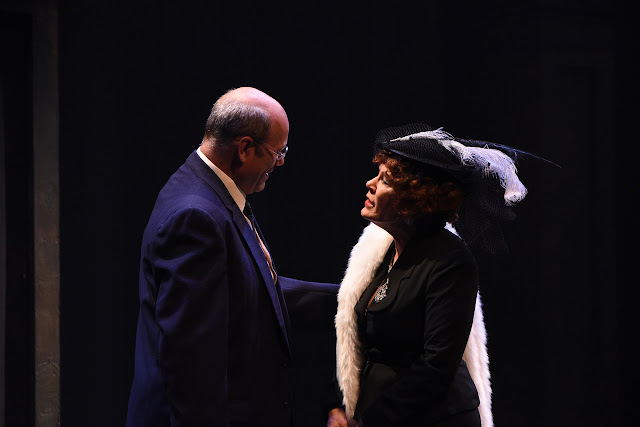 
“I AM BIG! It’s the pictures that got small,” declares Norma Desmond,

Playing an icon from Sunset Boulevard takes a singer of tremendous stature with serious acting chops. Luckily, there is Hollis Resnick. She is mesmerizing in this role as the delusional, larger-than-life, fascinating, and narcissistic silent-film-star-turned-recluse who dreams of returning to her former glory in movies.

From her initial entrance down the staircase of her eerie mansion to her final audition as Salome for her imagined comeback, it’s hard to take your eyes off Ms. Resnick. She is dramatic without being a caricature. Bill Morey’s costumes are just wonderful; I liked seeing what Norma, the aging diva, would be wearing next.

Norma’s biggest (only?) fan and devoted butler Max von Mayerling is played beautifully by Larry Adams. His reserved demeanor was perfect for Max, and his singing was exquisite. 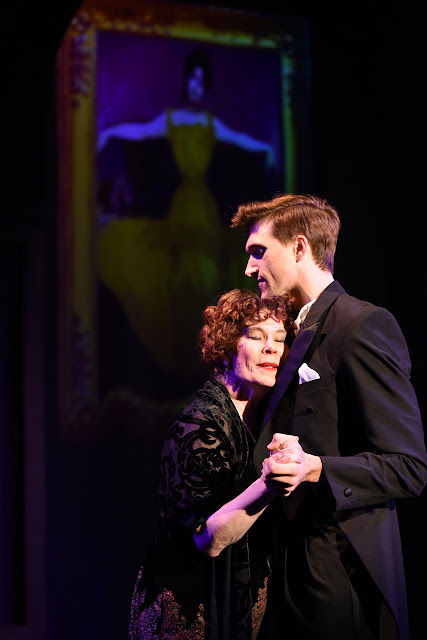 Billy Rude does a fine job as struggling writer Joe Gillis who becomes Norma’s editor/lover/boy toy/kept man. The scene where Joe is treated to a new, expensive wardrobe at Norma’s expense was one of my favorites. (“What is this? Mink?” asks his pal later at a party when he takes Joe’s coat.)

Joe’s writing partner (and eventual love interest) Betty Schaefer is played by the charming Michelle Lauto who has a lovely voice and stage presence. She may not be able to offer Joe gold, engraved cigarette cases, but she is persistent in advocating for his writing career. 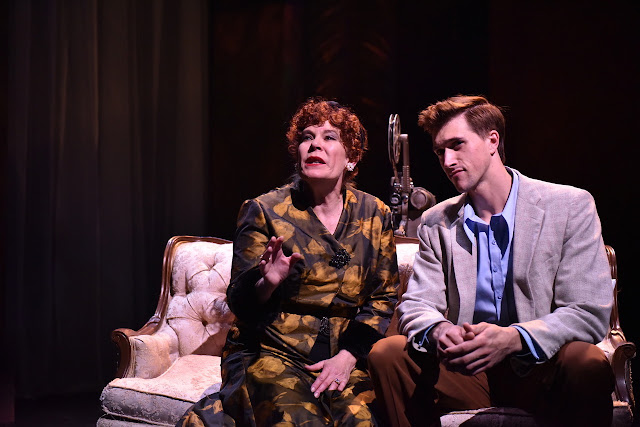 I loved the little inside jokes, like the lyric that “Billy Wilder will know my name,” from the wanna-be actors in Hollywood (Billy Wilder was the writer and director of the original movie) and William Holden’s picture on one of the many projected movie posters (handsome Holden, one of my Hollywood crushes, was the original Joe Gillis.)  All of the projected images constantly remind us of the film noir genre of old Hollywood glam. When Norma visits the movie set to chat with DeMille about her script, a boom microphone is over her head momentarily; Norma pushes it away with disgust, a nice touch to show her disdain for “talkies.”

Several years ago, my Theater Camp Pal Mary and I saw Sunday in the Park with George because we had never seen that classic before. “That was Porchlight, too,” Mary observed. “They have really hit their stride.” We were enthralled with Porchlight’s End of the Rainbow and Side Show. It’s exciting to have musicals of this caliber being produced in Chicago. Mary had seen Sunset Boulevard in London twenty years ago. But she liked Porchlight’s version better because of the intimacy of the theater space and the performers.  Porchlight is ready to celebrate their 25th anniversary and ready for their “close-up with Mr. DeMille.”

Sunset Boulevard’s run has already been extended. It’s one of those shows that will go into Chicago theater history. You won’t want to miss it.

Catherine Hellmann is a long time teacher and theater junkie. One of her absolute favorite movies of all time is Sunset Boulevard. 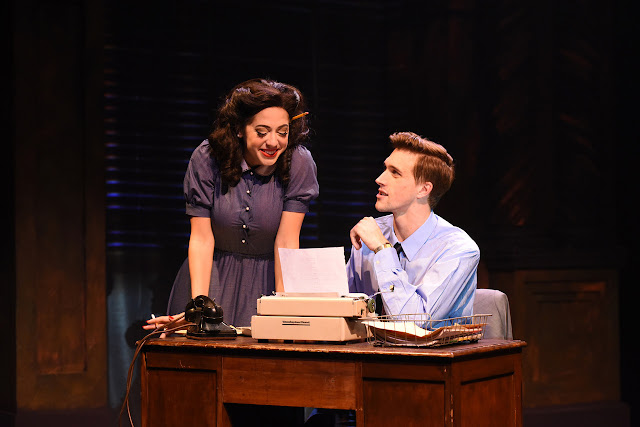 The first musical by Andrew Lloyd Webber to be produced at Porchlight, and winner of eight Tony Awards including Best Musical, Best Original Score and Best Book of Musicals, this landmark work has electrified audiences around the world. In her mansion on Sunset Boulevard, faded, silent-screen goddess, Norma Desmond (Hollis Resnik), lives in a fantasy world. When impoverished screenwriter Joe Gillis (Billy Rude) on the run from debt collectors, stumbles into her reclusive domain he is persuaded to work on Norma’s “masterpiece,” a screenplay that she believes will put her back in front of cameras. Seduced by Norma and her luxurious lifestyle, he finds himself trapped in her clutches until his love for another woman leads him to try and break free with shattering consequences.

Based on the iconic Billy Wilder film, Sunset Boulevard, the musical, has a long and storied history of its own with productions and revivals around the world starring Patti LuPone, Glenn Close, Diahann Carroll, Petula Clark and others. The production also features a rich score including the hit songs “With One Look” and “As if We Never Said Goodbye.” 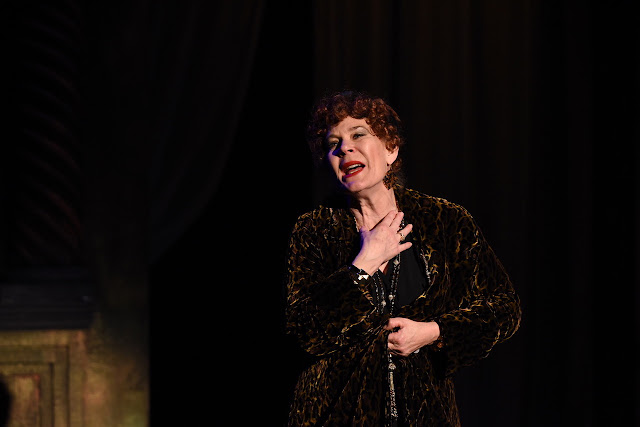 ABOUT HOLLIS RESNIK, “Norma Desmond”
Returning to Porchlight Music Theatre where she was last seen in the Porchlight Revisits production of The Rink, Hollis Resnik is the recipient of 12 Joseph Jefferson Awards, 2 Sarah Siddons Awards, the Helen Hayes Award and was a 2012 recipient of the Lunt-Fontanne Fellowship at Ten Chimneys. Her Chicago theatre credits include One Man, Two Guvnors, The Little Foxes, Travesties, Angels in America, Man of La Mancha, The Cherry Orchard, The Learned Ladies, Titus Andronicus, The Good Book and Carousel (Court Theatre); Grey Gardens and You Can’t Take It with You (Northlight Theatre); Candide, A Little Night Music, Wings, and The House of Martin Guerre (Goodman Theatre); Mame, Anything Goes, Into the Woods, Hairspray (Marriott Lincolnshire); and as “The Beggar Woman” in Sweeney Todd (Ravinia Festival). National tours include Les Misérables, Thoroughly Modern Millie, Dirty Rotten Scoundrels and Sister Act.

ABOUT DAVID GIROLMO, “Cecil B. DeMille”
David Girolmo returns to Porchlight where he appeared in Candide, played the title role in Sweeney Todd, the Demon Barber of Fleet Street and, most recently, in the Porchlight Revisits production of Can-Can. Broadway credits include Candide, directed by Hal Prince, and War Paint. Regionally, he has appeared at The Goodman, Chicago Shakespeare, Drury Lane, Marriott Theatre, Northlight, Paramount Theatre, Ravinia, Fulton Theatre, Maine State Music Theatre and more. Film and TV credits include “Crisis,” “Chicago P.D.,” “Chicago Fire, E.R.” and “Death Of A President,” on NBC and “Empire,” on FOX.

ABOUT MICHAEL WEBER, director / artistic director
Michael Weber is the artistic director of Porchlight Music Theatre where, under his leadership, the company has received the Best Production Equity Jeff Award for five consecutive years. He previously served as artistic director for the inaugural season of Drury Lane Theatre Water Tower Place (now The Broadway Playhouse) and at Theatre at the Center (1998 – 2004). Most recently at Porchlight he directed Gypsy starring E. Faye Butler and the Porchlight Revisits production of 1776 and he appeared on stage in  Porchlight Revisits Do Re Mi. His productions of End of the Rainbow, Sweeney Todd, A Funny Thing Happened on the Way to the Forum, Pal Joey, Assassins and Side Show at Porchlight Music Theatre, Grand Hotel at Drury Lane Theatre Water Tower Place and She Loves Me at Theatre at the Center were each nominated for the Joseph Jefferson Award for Best Production. Weber is proud to serve as a Public Television pledge host on WTTW, Channel 11.

ABOUT AARON BENHAM, music director
Aaron Benham returns to Porchlight where he music directed the Mainstage productions of Merrily We Roll Along and Side Show and the Porchlight Revisits production of City of Angels.  Most recently Benham served as the associate music director on the Broadway National Tour of Beautiful - The Carole King Musical and as music director of The Book of Merman Off-Broadway. Chicago credits include Grand Hotel and Sweet Smell of Success (Kokandy); Marie Christine (BoHo); Bewildered (original score –Hell in a Handbag); Pumpboys and Dinettes (Timberlake Playhouse); Benham has won two Jeff Awards and additional local credits include work with About Face, ATC, Bailiwick Chicago, Chicago Opera Theater, Circle, Montana Shakespeare, Piven, Pride Films, Second City, Theo-Ubique and Writers Theatre.

ABOUT SHANNA VANDERWERKER, choreographer
Shanna VanDerwerker is an inaugural recipient of The Rachel Rockwell Memorial Fund supporting fierce women behind the table at Porchlight Music Theatre and recently choreographed Porchlight Revisits Can-Can. She received her Bachelor of Arts in Dance from Point Park University and is a Chicago-area choreographer and educator. Locally, she has been the associate choreographer of Pippin at Venus Cabaret Theater as well as Beauty and the Beast and Joseph at Drury Lane Oakbrook. VanDerwerker received a Jeff Nomination for her choreography on Lysistrata Jones for Refuge Theater Project. Other choreography credits include: My Fair Lady, Newsies, 42nd St, South Pacific, Beauty and the Beast and Singin’ In The Rain at The Fireside Theatre in Fort Atkinson, WI. She was Christopher Gattelli’s associate for over 10 years, working on Broadway’s Amazing Grace, High Fidelity, and Silence! The Musical at the NY Fringe Festival. In the summer of 2018 she set his Tony-winning Broadway choreography of Newsies at NewArts in Newtown, CT. Performing credits: Beauty and the Beast at Drury Lane, “Lady in Green” in Singin’ in the Rain at the Fireside Theatre, swing in the Broadway company of Wicked, dance captain of the 1st National Tour of Wicked, company member of dre.dance with directors Andrew Palermo and Taye Diggs and several other shows at The Fireside.

ABOUT 2019 YEAR OF CHICAGO THEATRE
Porchlight Music Theatre is proud to be part of the 2019 Year of Chicago Theatre, presented by the City of Chicago and the League of Chicago Theatres. To truly fall in love with Chicago, you must go to our theatres. This is where the city bares its fearless soul. Home to a community of creators, risk-takers and big hearts, Chicago theatre is a hotbed for exciting new work and hundreds of world premieres every year. From Broadway musicals to storefront plays and improv, there’s always a seat waiting for you at one of our 200+ theatres.

ABOUT PORCHLIGHT MUSIC THEATRE
As the home for music theatre in Chicago now in its 25th season, Porchlight Music Theatre is nationally recognized for reimagining classic productions, developing new works and showcasing musical theatre’s noted Chicago veterans and rising stars. Porchlight elevates the genre by providing intimate and powerful theatrical experiences of music theatre through the lens of the “Chicago Style.” The 2017–2018 year marked a milestone for Porchlight as the company became an Artist In-Residence at the historic Ruth Page Center for the Arts in Chicago’s Gold Coast. Porchlight’s rich history includes the staging of more than 70 productions with 15 Chicago premieres and five world premieres. Through Porchlight’s “Off the Porch” new works program, the musicals of the next generation are developed and given a first audience. The School at Porchlight is Chicago’s center for music theatre training in the areas of performance, writing and appreciation including the launch of a youth summer “Make Your Own Musical” Camp in 2017. The company’s many accolades include 28 Black Theatre Alliance nominations and 12 awards, as well as a total of 150 Joseph Jefferson Award nominations resulting in 42 Jeff Awards including five consecutive Best Production awards for The Scottsboro Boys (2017), Dreamgirls (2016), Sondheim on Sondheim (2015), Ain’t Misbehavin’ (2014) and A Class Act (2013).

Ms. Resnik's performance is sponsored by Virginia and Gary Gerst.

Special thanks to June Golin for production support. 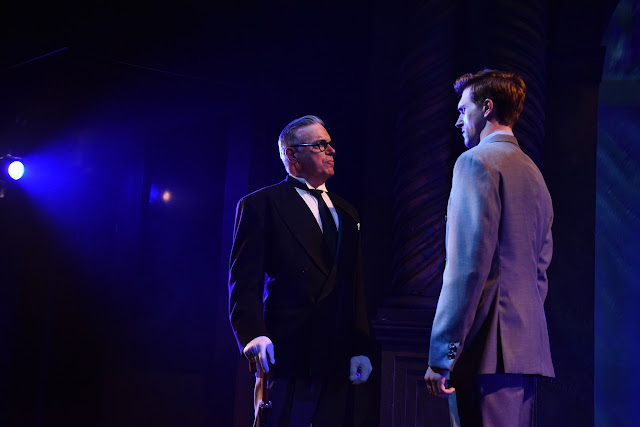 Posted by Bonnie Kenaz-Mara at 9:45 AM No comments: