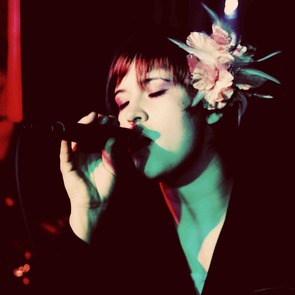 Poeina Suddarth’s genre was coined as subdued thrasher bluegrass by producer and long time friend Smoke of Oldominion. Though Poeina has been inspired and closely knit into the NW hip hop community, her music has been more often compared with Janis Joplin, Jeff Buckley and Billie Holiday.  poeinasuddarth.com

Up and coming performing artist and songwriter, Poeina Suddarth, is relentless in her pursuit of bringing her music to her nationwide fanbase. Although her van broke down almost a year ago she has been hitch hiking, ridesharing, and using fan funding to tour on foot while toting her guitar and suitcase of handmade merchandise behind her.

Poeina used to be a music teacher and volunteer community organizer.   Three years ago she dropped everything in pursuit of her dream to play and perform her original music.  Although she is currently independent and has no financial backing, Poeina takes whatever studio work and odd jobs she can find between tours to attempt to make ends meet.  "Touring is a grueling and intense way to make a living but I can't give up." ~Poeina

Poeina will be spending the next eight months touring nationally and internationally to promote her iTunes EP Poeina which was released on February 18th, 2013.  The versatile vocalist, Poeina Suddarth, meets with musicians and dancers all over the country to put on performances.  Every show is - unique and ever evolving - intense and emotive - and encompassing a range of human expression.

Touring the states is tough but since there is no way to hitch hike to Europe for her upcoming winter tour, Poeina will be launching a kickstarter campaign to fundraise to bring her music across the ocean.  To find more information about the fundraiser & tour schedule you can follow Poeina on facebook and twitter.