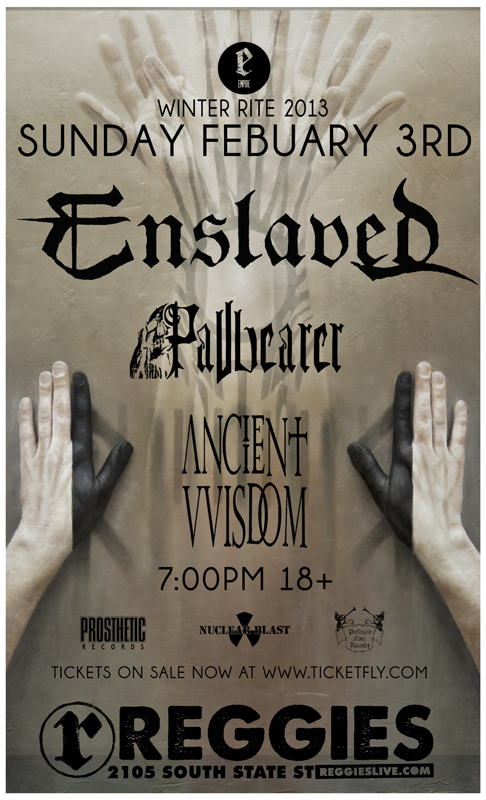 Spend your sabbath in a Winter Rite with some serious metal

Enslaved was formed in 1991 by Ivar Bjørnson and Grutle Kjellson, and did their first demo “Yggdrasill” in the summer of 1992. Enslaved released the legendary mini album “Hordanes Land” in 1993 (this was released also as a split-CD with Emperor’s s/t MLP). Enslaved’s debut album came during the spring of 1994, while the historically successful second album “Frost” was released already late 1994.
“Eld” in many ways marked the opening of a horizon-widening era for the band in 1997 – the following year saw the release of “Blodhemn”; perhaps surprising some with its fury and blacker edges. “Mardraum (Beyond the Within)” was released in 2000; this aural nightmare of an album sent shock waves through the Extreme Metal scene with its experimental, innovative approach. The band followed up with “Monumension” in 2001; and again the band was shocked to see the positive response to their “no rules” approach to Extreme Metal.
Many see an important, if not the important milestone being “Below the...[read more]

PALLBEARER
Pallbearer is a metal band from Central Arkansas, formed in 2008 after spending time playing in various bands around the Little Rock underground metal scene. Paying homage to doom metal of old while still looking wholly forward, the band built upon the underground success of their initial demo offering in 2010 and their debut full length “Sorrow and Extinction” was released in February, 2012 to virtually universal critical acclaim. Now the band slowly marches onward to deliver its progressively-tinged beautiful gloom on a global scale.

ROYAL THUNDER
Royal Thunder is an Atlanta based, four-piece, progressive rock/metal, alternative band founded by lead guitarist Josh Weaver in 2006. After going through some lineup changes, Mlny Parsonz (bass/vocals) joined the group in 2007. Together, the two added drummer Lee Smith whom Weaver and Parsonz had played with in a previous band, and then last but not least Josh Coleman (rhythm guitar) was added to the fold.
Royal Thunder self-recorded and released a seven song EP in late 2009 before signing with renowned independent label, Relapse Records, who re-issued the EP in 2010. The band quickly gained critical praise, being described as “Led Zeppelin astride a psychedelic unicorn” by NPR.org and “Black Math Horseman or Johnette Napolitano of Concrete Blonde, fronting Black Sabbath.” by Brooklyn Vegan.
Royal Thunder is set to release their proper full-length debut entitled ‘CVI’ via Relapse Records in the spring of 2011. ‘CVI’ is a sultry, southern, hard rock thinker of an album that is an... [read more]

ANCIENT VVISDOM
A dark, enlightening foresight into the future of humankind dictated by singer/songwriter Nathan Opposition.
Ancient VVisdom was founded in Austin, TX in late 2009 with the order consisting of Nathan Opposition , writer and vocalist, Justin “Ribs” Mason on acoustic guitar, and Nathan’s brother, Michael on electric guitar.
In 2010, they recorded and released a split 12” EP with Charles Manson entitled “Inner Earth Inferno” (Withdrawal Records), which garnished praise from critics and cultists alike.
The band spent the rest of the year sharpening their blackened craft, using acoustic guitars to give the music an organic connection to the nefarious rites they beget. Writing well over an albums-worth of material, they chose the most appropriate songs for their debut LP ” a godlike inferno” to record at The Bubble, a local, vvorld renowned studio in Austin, TX. For the recording , they... [read more]

Posted by Bonnie Kenaz-Mara at 3:10 PM No comments: