WICKED IS FLYING BACK TO CHICAGO OCTOBER 30, 2013 #BroadwayinChicago 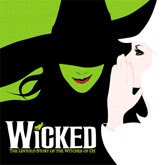 Broadway In Chicago is pleased to announce WICKED, Broadway’s biggest blockbuster, will return to Chicago in celebration of its 10th anniversary on Broadway and play the Oriental Theatre (24 West Randolph) for a limited eight-week engagement, Oct. 30 to Dec. 21, 2013.

With music and lyrics by Stephen Schwartz (Godspell, Pippin, Academy Award®-winner for Pocahontas and The Prince of Egypt) and book by Winnie Holzman (“My So Called Life,” “Once And Again” and “thirtysomething”), WICKED, the untold story of the witches of Oz, is directed by two-time Tony® Award winner Joe Mantello (Take Me Out, Love! Valour! Compassion!, The Vagina Monologues) and features musical staging by Tony® Award winner Wayne Cilento (Aida, The Who’s Tommy, How To Succeed…).

Based on the best-selling 1995 novel by Gregory Maguire, WICKED, winner of 35 major awards, including a Grammy® and three Tony® Awards, is the untold story of the witches of Oz.  It is produced by Marc Platt, Universal Pictures, The Araca Group, Jon B. Platt and David Stone.

“We are thrilled to bring WICKED back home to Chicago,” said Lou Raizin, President of Broadway In Chicago. “To be part of WICKED’s 10th anniversary celebration and once again share WICKED with Chicago audiences is a great honor.”

Long before Dorothy drops in, two other girls meet in the Land of Oz.  One – born with emerald-green skin – is smart, fiery and misunderstood.  The other is beautiful, ambitious and very popular.  WICKED tells the story of their remarkable odyssey, and how these two unlikely friends grow to become the Wicked Witch of the West and Glinda the Good.

WICKED has “cast quite a spell” (Washington Post) throughout North America, breaking box office records in every city that it has played, including Toronto, Chicago, Los Angeles, San Francisco, Washington, DC, Philadelphia and Boston to name a few.
WICKED has been declared “A Cultural Phenomenon” by Variety and “The Best Musical of the Decade” by Entertainment Weekly.  There are currently 7 productions worldwide: New York, London, Holland, Japan, Australia/New Zealand, and two concurrent North American Tours.  Globally, WICKED has amassed nearly $2.9 billion in ticket sales and has been seen by 36 million people worldwide in its 9-year history.

TICKET INFORMATION
Tickets are now available for groups of 15 or more by calling Broadway In Chicago Group Sales at (312) 977-1710. Individual tickets for WICKED will go on-sale at a later date.

For more information about WICKED, please visit www.wickedthemusical.com or www.BroadwayInChicago.com

Posted by Bonnie Kenaz-Mara at 4:28 PM No comments: