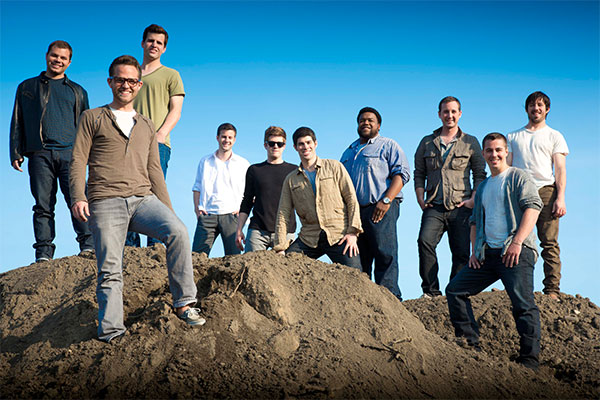 We dig the exciting, new, tent performance space--Riverfront Theater.   Original home to Broadway in Chicago's Peter Pan, it's now slated to become a permanent performance space.   So far, we've recently seen La Soiree and Brilliant Corners of Popular Amusement.   Both shows put the tent space to great use.     Check out some of our Brilliant Corners shots here.   We have lots more to come including live show shots of John Cale, Zola Jesus and El Circo Cheapo!    Check out our La Soiree review here.

Tickets, $39-$69, for the two-week, limited engagement of Gentleman’s Rule on sale NOW at the Riverfront Theater box office, 650 W. Chicago Ave,www.RiverfrontTheater.com; and through Ticketmaster, www.ticketmaster.com or 888.556.9484.

The men of Gentleman’s Rule have been working hard in the studio and on stage to prepare for the launch of their debut album, which will be released during the Riverfront Theater run.  Their album will include music made popular by David Guetta, Bob Marley, Nelly, Stevie Wonder, Bruno Mars, B.o.B., Gavin DeGraw, Wild Cherry, One Republic, Peter Gabriel, Jake Owen, The Script, Outkast, plus 2 original songs.   Prior to headlining in Chicago, Gentleman’s Rule will tour with Under the Streetlamp--the hit vocal group and former cast of Jersey Boys.
The members of Gentleman’s Rule are: TJ Breen (Tenor 2); Corey Frye (Tenor 1), Drew Kipfer (Bass), Will Lockhart (Baritone), Brent Mann (Tenor 2), Luke Mechling (Bass), Andrew Morstein (Tenor 1), Holland Nightenhelser (Tenor 2), Jasper Smith (Baritone) and Jesse Townes (Tenor 1).  The group’s vocal arrangements are written and produced by Dan Ponce and Deke Sharon.

“Their energy is contagious and their talent is world-class,” says Ponce. “The run at Riverfront Theater is the perfect way to debut this incredible group of voices—and introduce the first album, which is scheduled for release on November 13.  Fans of all ages can expect an unforgettable show featuring amazing soloists backed up by breath-taking harmony.  I am counting the days until opening night.”

Charlie Blum (Producer) is a show business veteran who holds many titles in the music industry: manager, promoter and current president/CEO of the Star Plaza Theatre, one of America’s premier concert facilities. Throughout his distinguished career he has worked with some of the biggest names in the music business. Charlie also manages the new hit vocal group Under The Streetlamp and as executive producer, launched their top-rated television special on PBS stations coast-to-coast.

Dan Ponce (Producer) is known to a cappella fans around the world as the founder, first music director, and former member of the hit band Straight No Chaser. He composed and arranged many of SNC’s most popular songs. Dan has spent the last year writing new repertoire for Gentleman’s Rule.  Dan is also well known in the Chicago media market. He is a reporter/anchor for WGN-TV and a talk show host on WLS Radio (890).

ABOUT RIVERFRONT THEATER
The Riverfront Theater is Chicago’s newest destination for music, theater, dance, spectacles and more. Audiences were first introduced to the venue last summer, during the successful 16-week run of Peter Pan, and again this summer with the critically acclaimed La Soiree.  All performances take place in the 22,000 square-foot, temperature-controlled tented theatre situated by the scenic Chicago River. Alongside the performance venue is River’s Edge, a pavilion tent and promenade area overlooking the Chicago River, where patrons can enjoy refreshments while taking in the view from this urban garden oasis.

The Riverfront Theater is located at Chicago Avenue and Halsted Streets, easily accessible for those driving in or via public transportation.  Additional programming will be announced soon.

Posted by Bonnie Kenaz-Mara at 12:44 PM No comments: