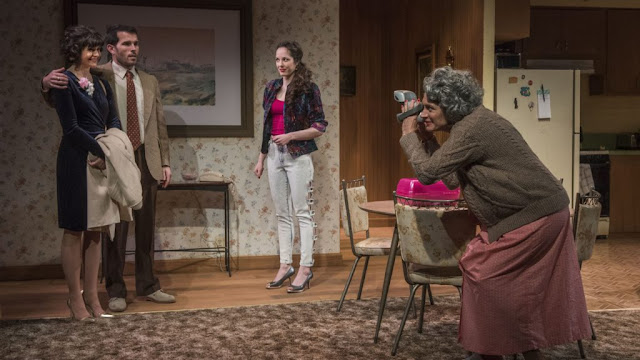 Review:
Raven Theatre's latest, the Chicago premiere of Nice Girl, is written and directed by women and has multiple strong female relationships depicted on stage. We enjoyed this nostalgic nod to 80s fashions and foibles, from laughably awkward pre-Tinder singles bars to awful bow blouses. 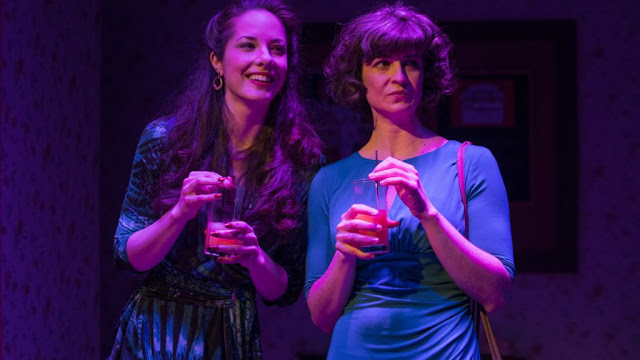 Nice Girl sweeps the audience back 30+ years to the 1984 childhood home of a bright, Jewish, suburban Boston girl, who never quite left the nest. The accents are instantly recognizable, as are the universal character types, emotional exchanges, and little life dramas. 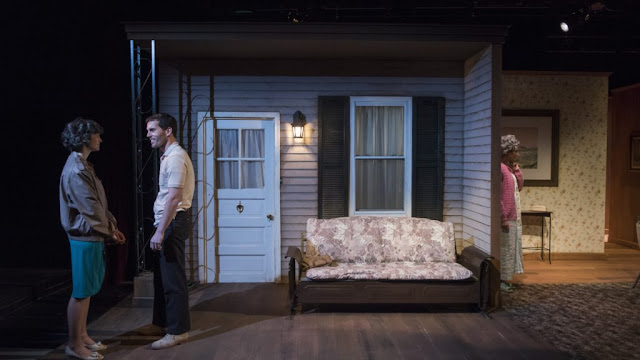 We enjoyed the relationship between grown 37 year old daughter, Josephine Rosen (Lucy Carapetyan) and her mother, Francine (Lynne Baker) who both alternate between annoyance and attachment with each other. Jo gave up a scholarship to Radcliffe in her Freshman year of college and came home to care for her dying father, and never went back. Now she's been stuck for 20 years, living with her mother who is healthy, but willfully dependent and homebound by choice. Her life consists of a dead-end secretarial job, jazzercise, and sparring with and mothering her mother. Jo does the cooking, cleaning and financial support, even scheduling doctors appointments her mother choses to miss. 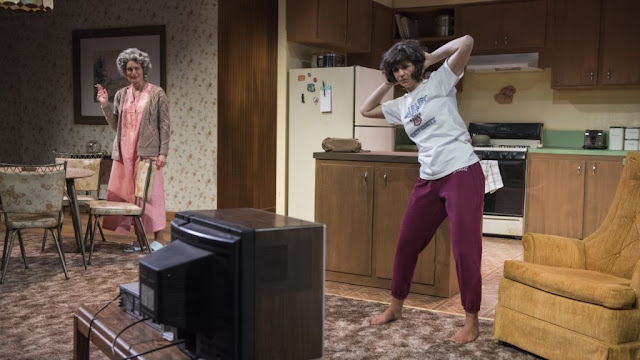 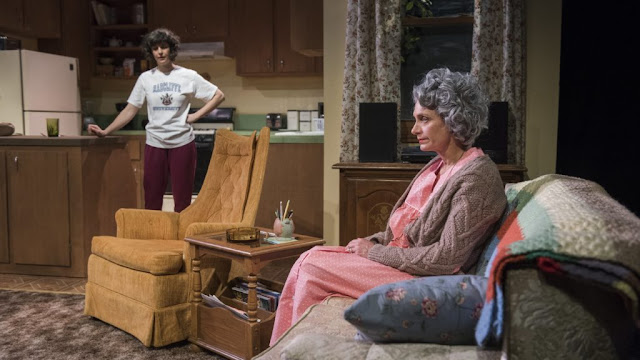 I've been seeing the sandwich generation portrayed for decades, late marrying couples stuck caring for both their young children and aging parents. Recently, however, I've seen quite a few shows that even stop short of that phenomenon. This genre explores young adults who came home, sometimes to care for ailing or dying parents and got stuck, never getting their own love lives or careers off the ground. As college loans and the cost of living soar, and nursing home/home costs skyrocket as well, this is a familiar dilemma to many. 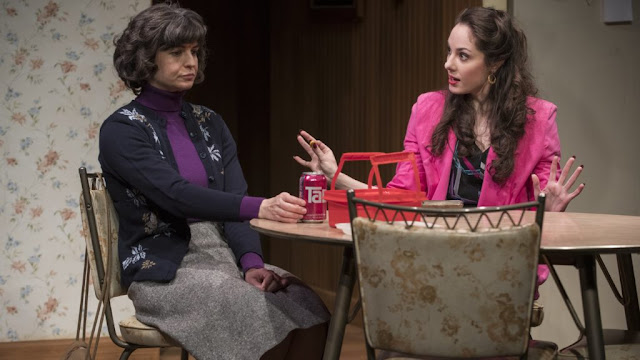 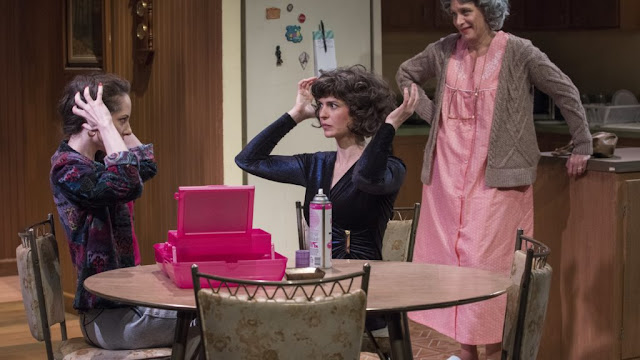 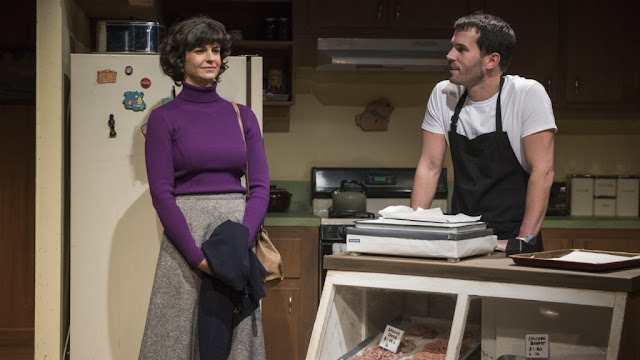 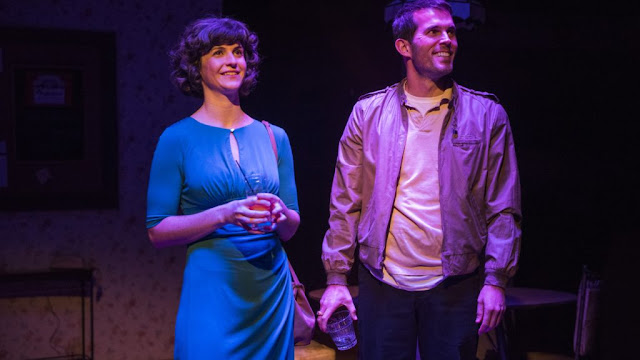 Without giving away some delicious plot twists, suffice it to say, Donny's a player with a regrettable past and squandered potential of his own to deal with. Nice Girl is a delightful adventure about learning to say yes to getting out of your comfort zone and getting unstuck, while still trusting your instincts when it's time to say no. Come find out when getting stood up for a date is actually the best thing that could possibly happen. 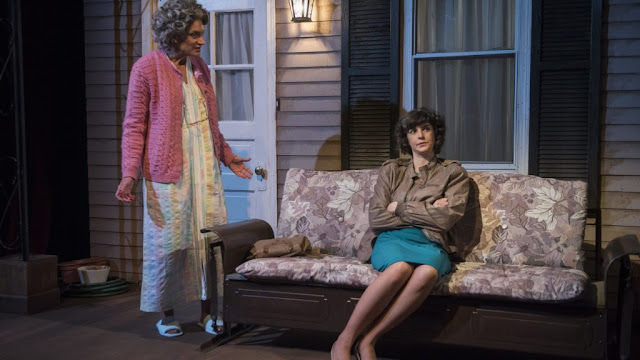 Raven Theatre is pleased to continue its 35th anniversary season with the Chicago premiere of Melissa Ross’s humorous and heartfelt play NICE GIRL, directed by Lauren Shouse, playing January 24 – March 11, 2018 in Raven’s East Stage, 6157 N. Clark St. (at Granville) in Chicago. Tickets are currently available at www.raventheatre.com or by calling (773) 338-2177.

It’s 1984 and Josephine Rosen finds herself stuck in her job, her spinsterhood and her mom’s house at age 37. But when a new friendship and a budding romance bring her the possibility of change, she takes tentative steps towards a new life with one powerful word: Yes. A play about the tragedy and joy of figuring out who you are, and letting go of who you were supposed to be.

About the Artists
Melissa Ross’s (Playwright) Plays include Thinner Than Water, A Life Extra Ordinary, Nice Girl, An Entomologist’s Love Story and Of Good Stock. Thinner Than Water and Nice Girl were both originally produced by LAByrinth Theater Company. Thinner Than Water is included in the anthology “New Playwrights: Best Plays of 2011” by Smith and Kraus. Nice Girl was a finalist for the Francesca Primus Prize and is in Applause’s  “Best Plays of 2015.” Of Good Stock received its world premiere at South Coast Repertory as a part of the Pacific Playwrights Festival followed by a production at Manhattan Theater Club. A Life Extra Ordinary premiered with The Gift Theatre Fall of 2016. An Entomologist’s Love Story is an Alfred P. Sloan Foundation Commission and an Edgerton New Play award recipient, and will premiere at The San Francisco Playhouse Spring of 2018. Her short play Jack was a part of Summer Shorts 2017 and will be published by Dramatists Play Service. Melissa’s plays have been developed with The Amoralists, The Cherry Lane Theater, Colt Coeur, Dorset Theater Festival, The Gift Theatre, Iama Theatre Company, The Juilliard School, Labyrinth Theater Company, LCT3, Manhattan Theater Club, Montana Rep, New York Stage and Film, The New Group, South Coast Repertory, Rattlestick Playwrights Theater and the TheatreWorks Palo Alto New Works Festival. She is twice commissioned by both South Coast Repertory and Manhattan Theater Club. Melissa is a graduate of Bennington College and the Lila Acheson Wallace Playwriting Program at The Juilliard School, a two-time winner of the Le Comte de Nouy Prize and a proud member of LAByrinth Theater Company.

Lauren Shouse (Director) is the Artistic Associate and Literary Manager at Northlight Theatre. Her recent directing credits include: The Legend of Georgia McBride at Northlight Theatre, Betrayal at Raven Theatre, Rapture, Blister, Burn, Superior Donuts and A Christmas Story at Nashville Repertory Theatre, the world premiere of Long Way Down with 3Ps productions (nominated for American Theatre Critics Association Steinberg New Play Award 2011); the world premiere of Religion and Rubber Ducks with Ovvio Arte; Parallel Lives, The 25th Annual Putnam County Spelling Bee, The Last Five Years and Chess in Concert with Street Theatre Company; the world premiere of Rear Widow at Chaffin's Barn Theatre and Sylvia Plath’s 3 Women. As Artistic Associate at Nashville Rep, Lauren directed the Ingram New Works Play Lab and Festival, which developed new works by John Patrick Shanley, David Auburn, Steven Dietz and Victoria Stewart. Lauren also co-founded Ten Minute Playhouse, a company that produced short plays by local playwrights. Before moving to Nashville, Lauren lived in London, UK and worked with Producer/Director Hugh Wooldridge. Her work abroad includes: Production Executive for The Night of 1000 Voices (celebrating John Kander and Fred Ebb and starring Joel Grey with Avenue Q) at The Royal Albert Hall; Production Executive of An Evening with Michael Parkinson at The Theatre Royal - Windsor, Children's Director/Assistant to the Director of A Gift of Music, and Assistant Director of The Night of 1000 Voices at The Odyssey Arena in Belfast, Ireland. Lauren holds an MA in Performance Studies from the University of North Carolina – Chapel Hill where she adapted and directed The Time Traveler’s Wife. She received her MFA in theatre directing at Northwestern University where she directed Stop Kiss, Eurydice and In the Next Room or the Vibrator Play. In Chicago, Lauren has also worked with Steppenwolf Theatre, Goodman Theatre, Lookingglass Theatre, Rivendell Theatre, Sideshow Theatre, Route 66, Chicago Dramatists, The Gift and Stage Left Theatre.www.laurenshousedirects.com