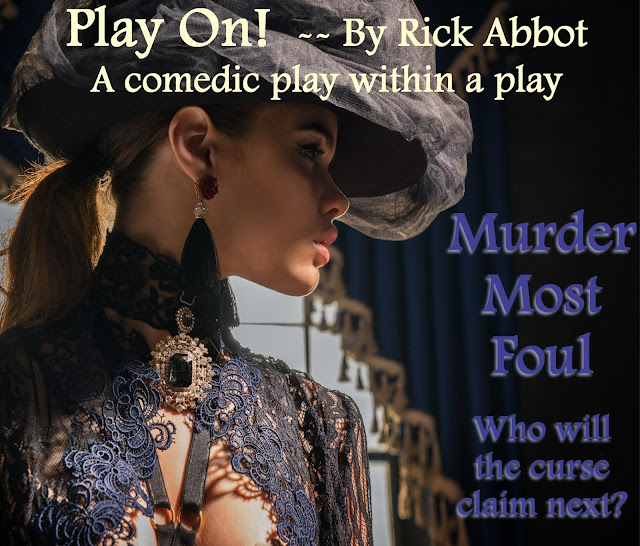 Play On! takes audiences behind the scenes of a local amateur theater company as it prepares a production of Murder Most Foul, an original murder mystery written by a local playwright.  Abbot’s side-splitting look at the inner workings of amateur theater unfolds in three acts of cascading goofiness. First at a rehearsal less than a week before the show opens, next during the disaster-plagued dress rehearsal, and finally, the show's opening night.

Geraldine “Gerry” Dunbar (Whitney Minarik) is the long-suffering director who struggles to breathe life into the original script. Her troupe has their work cut out for them. First, the murder mystery script is not very good. And  the set isn’t finished. And the cast is still wobbly on their lines. The good news is that the novice playwright, Phyllis Montague (Nicki Howard), has allowed the company to produce her new play for free. The bad news is that Phyllis keeps changing her script, forcing the cast of amateurs to re-learn their lines over and over again. The biggest mystery of all seems to be whether the company will possibly be able to get this ever-changing production ready in time!

Everyone involved with Murder Most Foul lacks skill and experience, and it shows. As Play On! Opens, the troupe is just four days away opening night. Despite the best efforts of Louise Peary (Jolie LeBell), the company’s omnipresent sound, light and scenic technician, the set is incomplete and technical issues abound. Stage Manager and prompter Aggie Manville (Sarah Myers) has her hands full trying to manage the show’s many sound cues while she stays busy prompting actors who keep forgetting their lines.

The actors, unsurprisingly, are having their own crises and they are pushing their director and crew to the breaking point. The older married couple and amateur theater veterans, Henry Benish/Lord Dudley (Rob Weinstein) and Polly Benish/Lady Margaret (Suzy Krueckeberg), challenge their director at every turn. Some cast members react to the mounting backstage tension by either by hitting the bottle of getting on each other’s nerves. Saul Watson/Dr. Rex Ford (Travis Monroe Neese), the mystery’s villain, has a special dislike for Polly whom he taunts her with snarky personal insults. Polly -- a bit of a diva herself -- is having none of it and huffs her indignation to everyone within earshot.

Meanwhile, the young ingénues of Murder Most Foul, Billy Carewe/Stephen Sellars (Josh Marshall) and Violet Imbry/Diane Lassiter (Katie O’Neil) are warming to each other in “real life” just as their characters do in the mystery they are rehearsing. They regularly forget to call each other by their scripted character names during rehearsals as their on-stage romance seems increasingly real. Wait… is love blooming right there on stage?

Then of course, there’s Marla “Smitty” Smith (Emrose Seidenberg), the high school student playing Doris the maid. Like everyone else, Smitty worries about keeping her lines and cues straight in the constantly-evolving play, but she has additional concerns that are practical and immediate. Will she ever get tomorrow’s biology homework done? Will her mother be angry if she gets home late because the rehearsal ran over?

Play On!  is a fast-paced frolic that has been called “a love letter to amateur theater.” It affectionately pokes fun at the foibles of a lovable group of thespians who struggle valiantly, and hilariously, toward their big opening night. Their energy and enthusiasm crashes up against looming deadlines, warring egos, missed cues, and an ever-changing script… and the results are both heartwarming and hysterical.

Understudies for this production are Grace Hutchings, Gina Phillips and Jared Sheldon.

Stage Manager for this production is Helen O’Brien

Rick Abbot (Playwright) is one of several pennames used by the prolific playwright Jack Sharkey who was born in Chicago in 1931. Abbot graduated from college with a degree in English with an emphasis on Creative Writing. After serving in the army, Mr. Abbot moved to New York City and began his successful freelance writing career. In 1975 he devoted himself exclusively to writing plays. He wrote and published 83 plays, including thrillers, comedies and musicals – many of which continue to be performed around the world. One of his plays, is Par for the Corpse written under the name Jack Sharkey, has been produced twice on the Oil Lamp Theater stage. He died of cancer in 1992.

Keith Gerth (Executive and Artistic Director) founded Oil Lamp Theater in 2005. Prior to establishing the Theater, which was originally located in the Lakeview neighborhood of Chicago, Keith held a number of positions. After high school, Keith was a carpenter for eight years with Murray Countertops in Streator, Illinois. He left that position in 1989 to obtain a degree in Financial Accounting from Illinois State University. Keith graduated with honors and began working for the global professional services firm of Deloitte in 1991 and became a Certified Public Accountant. He worked at Deloitte for fifteen years in the Audit and Assurance practice, from which he retired in 2005 at the level of Director. Keith was professionally trained in acting at Act One Studios in Chicago, Illinois. Keith has been actively involved in the community and has served on the boards of the Glenview Art League and the Glenview Chamber of Commerce. Keith is married to Carole Flamm. They live in Northbrook.

The theater may be reached by car (approximately one mile west of I-94) or by Metra (three blocks east of Milwaukee District/North – Glenview Station).  For more information on traveling to Oil Lamp Theater, visit oillamptheater.org/plan-visit.

Over the past thirteen years, Oil Lamp Theater has been dedicated to the presentation of traditional theater in an immersive, intimate setting. Under the executive and artistic leadership of Keith Gerth, Oil Lamp Theater has welcomed more than 50,000 guests into its unique, inviting venues. In March, 2012, Oil Lamp Theater was incorporated at a not-for-profit theater and established its current 60-seat location in downtown Glenview. The professional company performs plays that present and appeal to core American traditional values relevant to current issues. Oil Lamp Theater welcomes patrons as family, encouraging a personal atmosphere and artist interactions to emphasize human emotional connections.

In 2017 and 2018 Oil Lamp Theater was awarded the North Shore Choice Award in recognition as the best suburban theater in Chicago.

Posted by Bonnie Kenaz-Mara at 5:37 PM No comments: