OPENING: Hell in a Handbag's THE GOLDEN GIRLS: The Lost Episodes, Vol. 3 is Back at Mary's Attic 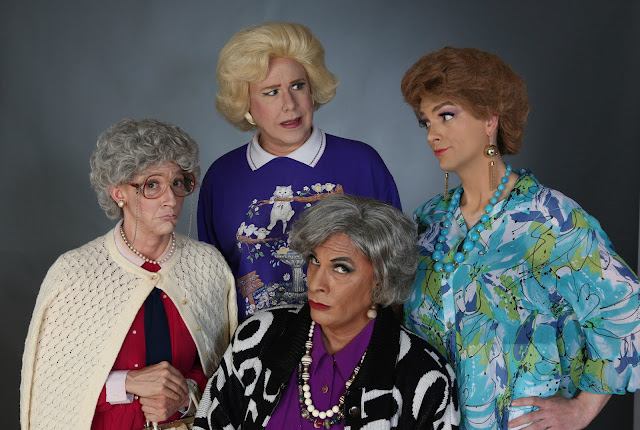 I'll be ChiILin' with these comedic queens, for the Opening/Press performance: Saturday, April 27 at 7:30 pm, so check back soon for my full review. I adore Hell in a Handbag's fabulous parody tributes to the adventures of Dorothy, Rose, Blanche, and Sophia and I catch every show I can.

This little gem came across my facebook feed last week and cracked me up, with it's absolute truthiness. 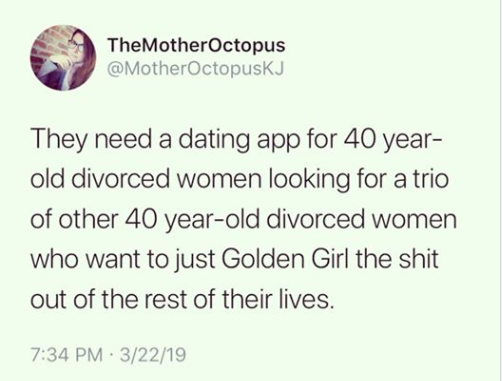 Wise words for all of us regardless of age, gender, or marital status... I want in, and I'm starting that mission with a spring dose of inspiration via GOLDEN GIRLS: The Lost Episodes!

Join Dorothy, Rose, Blanche, Sophia and their whacky friends and relatives for all new adventures – including the first-ever musical episode. Written by Artistic Director David Cerda and directed by Miles Brindley, the latest installment of Handbag’s hit sitcom parody will play April 25 – August 31, 2019 at Mary’s Attic, 5400 N. Clark St. in Chicago’s Andersonville neighborhood. Tickets are currently available at www.handbagproductions.org or by calling (or by calling (800) 838-3006. The press opening is Saturday, April 27 at 7:30 pm.

Episode One: Caged Miami Heat – Find out what happens when the girls are arrested and thrown in jail for the murder of their long-lost cook, Coco (Michael Rashid).

Episode 2: Singing in the Pain – Can Rose (Ed Jones) overcome her crippling stage fright and perform a duet with her idol, Lyle Waggoner for the big Miami’s Ladies’ Auxiliary fundraiser? This is the first Golden Girls musical episode, so be prepared for songs like, ‘Back in St. Olaf’, ‘You’re a Tramp, Blanche’, and many more.

THE GOLDEN GIRLS: The Lost Episodes series began in 2017 and has been going strong ever since. Chicago loves Handbag’s long-running parody of the classic TV sitcom with original scripts.

About the Artists
David Cerda (Playwright) is the Artistic Director and co-founder of Hell in a Handbag Productions. Cerda has written or collaborated on POSEIDON! An Upside Down Musical, Caged Dames, Sexy Baby, Lady X: The Musical, Christmas Dearest, Rudolph the Red-Hosed Reindeer, SCARRIE-The Musical, The Golden Girls: The Lost Episodes (Volumes 1 & 2), The Golden Girls: The Lost Episodes: The Holiday Edition, The Halloween Edition, and many others. He has also worked as a songwriter with Amazon Studios and as an actor around Chicago. In 2016, Cerda was in inducted into the Chicago GLBT Hall of Fame and in 2017 he received a Lifetime Achievement Jeff Award for his contributions to the Chicago theater community and philanthropic efforts.

Miles Brindley (Director) is a director, actor and stage manager originally from South Dakota. After graduating from the University of South Dakota with a BFA in Acting, Miles has worked as a stage manager for Long Beach Opera, a company actor for The Black Hills Playhouse, a music theatre director for the International Music Camp, a drama instructor for both Campbell County High School and Freeman Academy, as well as various rolls with several community theaters. Miles' most recent directing projects include Steel Magnolias, Joseph and the Amazing Technicolor Dreamcoat, Beauty and the Beast Jr. and The Music Man.

Hell in a Handbag is dedicated to the preservation, exploration, and celebration of works ingrained in the realm of popular culture via theatrical productions through parody, music and homage. Handbag is a 501(c)(3) Not for Profit.

Posted by Bonnie Kenaz-Mara at 6:31 PM No comments: