Pay What You Can: Rhinoceros Theater Festival April 1 – May 7, 2022 at Jimmy Beans Coffee & Pride Arts Center

Curious and friends present a pared-down, curated series of events including music, spoken word, new plays, drag and variety events. Programming on Sunday, May 1 at Pride Arts Center will include a special celebration of Matt Rieger, longtime Managing Director for Curious, who died suddenly in October 2021, and whose final play, Jimmy and the Nickels, will run Sunday afternoons and Thursday evenings at Pride Arts. Rhino Fest returns this year following a hiatus in 2021, in which festival producers awaited the return of safer gatherings in public spaces rather than shifting to a virtual format. This Rhino Fest represents the result of invitation and collaboration among small groups of Chicago artists, making inquisitive and expansive events for the current moment. 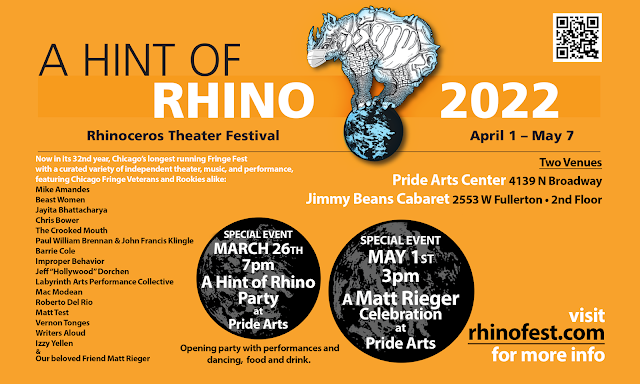 Tickets to all events are $20 or pay-what-you-can.

Proof of vaccination will be required at the door, and audience members and crew will remain masked inside venues. Cash and credit cards accepted at the door. Tickets are currently available through Eventbrite. Further additional information and updates, visit rhinofest.com.

A Hint of a Rhino Party

An opening night party to mosey back to Rhino. An evening of food and drinks, presentations, some previews of shows to come, a film or two, some jokes and lots and lots of mingling.

April 9 & 16: Drag Show with Narcisca and Slussy Vanity. Further guest artists to be announced. Produced and directed by Diane Hamm with Labyrinth Arts and Performance Collective.

Known to many as Spoo Willoughby, Vernon Tonges is a low-profile performing songwriter and singer known for his crippling introversion and disastrous inability to adequately self-promote. Many of his shows occur unannounced in random parking lots where his audience mainly consists of drivers idling in the drive-through line awaiting takeout chicken. Surplus thigh meat comprises his chief compensation. The world remains a tough nut to crack.

The Crooked Mouth and Special Guests

A Chicago-based music group including Jenny Magnus, Beau O'Reilly, T-Roy Martin, Vicki Walden and Heather Riordan with ample harmonies and lyrics to sink one's teeth into. Rock/pop/alt-country/vaudeville, if you must have a genre.

For over three years, from in-person to online and now both live and streaming – this unassuming monthly forum organized by Donna Dunlap, Karen Fort and Cordis Heard for those who write and have seldom if ever spoken their own written words – a core Prop Thtr tradition. Two hours with three to five readers.

Jimmy and the Nickels

Sundays: April 3 at 5 pm, April 24 & May 1 at 3 pm. Note: the May 1 show will be followed by a celebration of Matt Rieger, Broadway Theater at Pride Arts Center

A follow up to 2020’s lauded My Dinner with Joe, this chamber comedy, the last work of the beloved and abruptly departed Curious playwright and Managing Director Matt Rieger, features Mike McKune, Don Schroeder, Nick Leininger and Paul Brennan, and is directed by Stefan Brün with Charlotte Lastra.

The Problem With Flowers

Roberto Del Rio’s solo work playfully examines the loves and miseries, the delights and betrayals in an emotional day off. From dawn until dusk we’ll hear those struggles, triumphs, fears and desires that only manifest when we’re by ourselves.

Time in a Teacup

The Anchovy's Song, The Pelican's Apocalypse

Venue Note: Broadway Theater at Pride Arts Center is a first-floor space and is wheelchair accessible, with two accessible bathrooms. Jimmy Beans Cabaret is up one flight of stairs and is not easily accessible for wheelchair users.

The event that became the Rhinoceros Theater Festival began in 1988 as an offshoot of the Bucktown Arts Fest, and in its first year featured just two days of performances, including work by Jenny Magnus and Beau O'Reilly. When the event's founder moved away from Chicago in 1990, he asked a ragtag group of local artists (including Beau O'Reilly and Theatre of the Reconstruction’s Scott Turner) to keep the festival going, and the Rhino Fest was born. The Curious Theatre Branch went on to produce the Rhino across many neighborhoods and venues over the years, with events variously taking place in Wicker Park/Bucktown, Rogers Park, Andersonville and Avondale; at spaces including the Lunar Cabaret and Full Moon Café, the Neo-Futurarium, the Society for New Things, The Garage, The Firehouse, Remains Theatre and Prop Thtr. In the mid-2000s, Rhino Fest settled at Prop Thtr in Avondale as its long-term base, and Prop and Curious co-produced the festival among a shifting group of curators for many years. Following the closure of Prop's Elston Ave. space in 2020, and a year off during the height of the pandemic, Rhino Fest is once more becoming itinerant, this year producing shows at The Broadway at Pride Arts Center in Uptown and Jimmy Beans Coffee in Logan Square.

Posted by Bonnie Kenaz-Mara at 6:21 PM No comments: