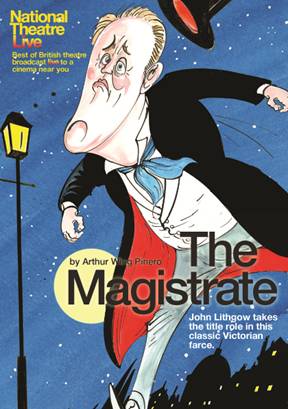 In a similar vein to the National Theatre’s smash-hit classic comedies, She Stoops to Conquer and London Assurance, The Magistrate is sure to have audiences doubled up with laughter. When amiable magistrate Posket (John Lithgow) marries Agatha (Olivier Award-winner Nancy Carroll, After the Dance), little does he realize she’s dropped five years from her age – and her son’s. When her deception looks set to be revealed, it sparks a series of hilarious indignities and outrageous mishaps.

Now in its fourth season, the international phenomenon National Theatre Live is the brainchild of Northwestern University alumnus David Sabel, National Theatre’s Head of Digital. Sabel explains, “When you think of filmed theatre it's the exact opposite of what it's supposed to be: there in the space, seeing the sweat and feeling the emotion and heat of the room. How is that going to work? People are surprised at how connected they feel. A huge part of that is the shared experience; if you were watching it on TV, even if it was live, you'd go and make a cup of tea, but here you are buying a ticket and reacting and applauding together.

“It's like filming a sports match; you take the audience's eye to where the ball goes. If we've done our job, you should feel you saw a piece of theatre, not a film, even though there were probably lots of close ups where the director was choosing what you see.” Since its debut in 2009, National Theatre Live has expanded from 40 theatres in the UK to nearly 300 screens worldwide.

The 2013 NTLive season at Music Box continues in March with People, the acclaimed new play by Alan Bennett (The History Boys) and concludes in May with This House, a biting and energetic new play about the ruthless world of 1970s British politics.   Visit www.musicboxtheatre.com/collections/national-theatre-live-presents for additional details.

National Theatre Live is an initiative by the UK’s National Theatre to broadcast live performances onto cinema screens around the world. Since its first season, which began in June 2009 with the acclaimed production of Phédre starring Helen Mirren, more than 750,000 people have now experienced the National’s work on movie screens worldwide.

Posted by Bonnie Kenaz-Mara at 10:07 AM No comments: