OPENING: TATC ANNOUNCES CAST FOR A WONDERFUL LIFE: THE MUSICAL 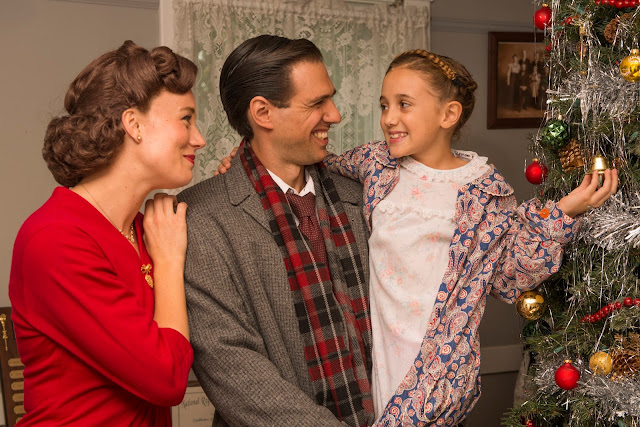 For more information on Theatre at the Center, visit www.TheatreATTheCenter.com.

Actors David Sajewich, in the role of George Bailey, and Allison Sill in the role of his wife Mary, lead the cast of Theatre at the Center’s  A Wonderful Life: The Musical  with James Harms as Mr. Potter, David Perkovich as Clarence, Jim Heatherly as Uncle Billy and Jason Richards as Mr. Martini. Previews begin November 16 with an Opening Night on November 19 and a run through December 23. A Wonderful Life: The Musical is made possible by the generous support of show sponsor American Community Bank.

“We are so excited to welcome the holiday season with A Wonderful Life,” said Artistic Director Linda Fortunato.  “All the charm, heart and humanity of the classic film are brought to the stage in this musical adaptation of the beloved life-affirming story. Perfect for a holiday celebration with the whole family”.

Based on the classic 1946 Frank Capra film starring James Stewart as George Bailey, A Wonderful Life: The Musical features book and lyrics by Sheldon Harnick and music by Joe Raposo. It’s the musical telling of how Clarence, George Bailey’s guardian angel, shows George how different the world, and everyone whose life he has touched, would be if he had never been born.   The beauty of the season, iconic Bedford Falls and yuletide spirit await audiences on the TATC stage for a musical that applauds the true meaning of Christmas.

David Sajewich was previously seen at TATC in All Shook Up and Beverly Hillbillies. Other credits include Les Miserables at Drury Lane Oakbrook, The Pajama Game and The Baker’s Wife at The Music Theatre Company and Fiddler on the Roof at Paramount Theatre. Allison Sill, who was also last seen at TATC in All Shook Up, has previous credits which include Honeymoon in Vegas, She Loves Me and How to Succeed in Business Without Really Trying at Marriott Theatre, Oklahoma at Paramount Theatre and The Producers at Mercury Theater Chicago.

James Harms, who plays Mr. Potter, previously appeared at TATC in Beverly Hillbillies. James received Jeff Awards for his performances in The Fantasticks, Hello, Dolly, Me and My Girl, and La Cage aux Folles. Last year he made his debut at Carnegie Hall in concert with Chita Rivera. In the role of Clarence, David Perkovich, was last seen at TATC in Man of La Mancha and Phantom.   David has performed in more than 120 shows including the national tour of Evita and has directed more than 60 productions including TATC’s The 39 Steps, Spamalot, Beverly Hillbillies and Grease. Jim Heatherly is making his TATC debut as Uncle Billy. Jim’s recent work includes the world premiere of Dance For Beginners at Piven Theatre Workshop and Light Up the Sky at Citadel Theatre.  Jason Richards, playing multiple roles as Mr. Martini, Mr. Hepner and Mr. Campbell, was previously seen at TATC in Big River and Annie Warbucks.  Other credits include The Producers at Mercury Theater Chicago and Shrek at Chicago Shakespeare. Jason also received a Jeff Award for his performance as Nicky/Trekkie Monster in Avenue Q at Night Blue Theater.

William Pullinsi is director of A Wonderful Life: The Musical. Pullinsi served as TATC’s Artistic Director for 10 seasons prior to becoming Artistic Director Emeritus in 2015 when he was named “Chicagoan of the Year in Theatre” by the Chicago Tribune. In 2016, The League of Chicago Theatres also presented Pullinsi with their Lifetime Achievement Award for his outstanding contributions influencing and inspiring the Chicago theatre community. Pullinsi has won 19 Jeff Awards for Best Production and/or Best Direction and produced and directed more than 400 productions of Broadway plays and musicals.

Posted by Bonnie Kenaz-Mara at 12:50 PM No comments:

Email ThisBlogThis!Share to TwitterShare to FacebookShare to Pinterest
Labels: A Wonderful Life: The Musical, Holiday themed shows, Munster IN, opening, shows on our radar, TATC, Theatre at the Center
Older Posts Home
Subscribe to: Posts (Atom)