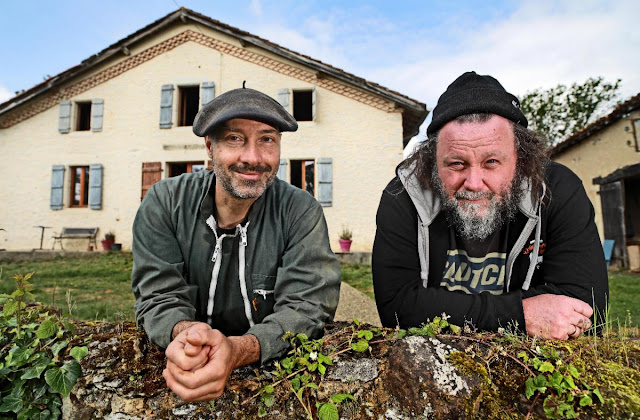 Here at ChiIL Live Shows, we caught The Inspector Cluzo live in Chicago when they opened for Clutch, and we thoroughly enjoyed their set. Check 'em out.

Check out their video for Swallows HERE.

The Inspector Cluzo says "We decided to write a song about the swallows not only because they are so beautiful spinning around in the sky or flying over our organic wheat and corn fields to collect bugs to feed their young, but also to point out that farming is possible without destroying the world. We've been trying out this agro-ecological system for more than 10 years now and are so fortunate to welcome swallows every year”

The DIY Guascon farmers are thrilled to announce the release of their second single "Swallows". The track is accompanied by a stunning animated video, which is available here. The single is taken from the band’s forthcoming ninth studio album Horizon set for release on January 27, 2023, via F.thebassplayer Records.

"Swallows" video has been drawn by Cecilia Pepper and animated by Maxime Cazaux, it perfectly embodies the spirit of this track. Swallows is quintessentially a The Inspector Cluzo song, it is more than a ballad, it brings to the frontline crucial issues we all face, with rock elegance, unbearable sadness and profound anger.

The Inspector Cluzo comments: "At Lou Casse organic farm, we're fortunate enough to see migratory birds such as swallows building their nest in the old barn. Pesticides used worldwide make it hard for swallows to find food because bugs are being killed in the fields. Furthermore, the proliferation of urban zones prevents them to find proper shelter to raise their young. We can see them disappearing little by little. It's ironic to know that the use of pesticides is said to "feed people" - most food on Earth is made using chemical agriculture techniques - whereas it destroys every little life around it.

We decided to write a song about the swallows not only because they are so beautiful spinning around in the sky or flying over our organic wheat and corn fields to collect bugs to feed their young, but also to point out that farming is possible without destroying the world. Though it'll be a long shot and a long fight before modern society understands this.

At Lou Casse, we've been trying out this agro-ecology system for more than 10 years now and are so fortunate to welcome swallows every year... "

Each song shares and takes inspiration from real life events and experiences. For example, "Wolfs At The Door", tells the story of the struggle the two farmers experienced when standing up against a duck factory located in front of their farm and the fight they had to put up when faced with a massive bird flu pandemic. "Saving The Geese" describes the civil disobedience against the French State and the big local agro-industries corporations that wanted to kill the band’s healthy animals as "prevention”. "Shenanigans" re-evokes the great times the band spent in Nashville with their friend Bill Elder who run the Shenanigans bar and who put them up during all Nashville studio sessions. "Rockophobia", on the other hand, is one of the surprises The Inspector Cluzo reserved for the fans, it is a fun rock number, in which the band wonders "what does rock mean today?" laughing at Iggy Pop, who later decided to feature on the track.

In keeping with their reputation as one the most prolific touring bands in the world (they have played over 1200 shows in 67 countries to date), The Inspector Cluzo completed sold out USA support tours with Clutch and Eels in 2019, alongside a host of festival appearances across the globe (including Lollapalooza Chile and Brazil) and a maiden US headline tour. In the summer of 2022 The Inspector Cluzo played extensively on prestigious stages across Europe, including the widely renowned Hellfest Festival, where they gathered a crowd of 50,000 fans.

Wolf At The Door

Swallows – Where are The Swallows Gonna Build Their Nest

Swallows Back – When Will The Swallows Return

About The Inspector Cluzo

The Inspector Cluzo is a Gascony based Rock-Blues duo, created in 2008 by Laurent (Guitar, Lead Vocal) and Mathieu (Drums). The two met at their 1st year of Physics studies in Mont de Marsan. Since 2008, the band have released 8 albums via their self-run record label F.TheBassPlayer Records, they are totally 100% self-financed, family-based organized, and 100% DIY.

However, the band’s main activity is farming. They are organic professional farmers, they run a 15Ha family farm called "LOU CASSE" (“the oak” in Gascon language) in Gascony, producing organic wheat and organic corn with their own free seeds. No GMO, no hybrids seeds, no chemicals or pesticides are used. They belong to a new generation of farmers that are into an Agro-Ecologic system challenging and fighting climate change for the new generations.

Posted by Bonnie Kenaz-Mara at 2:07 PM No comments: