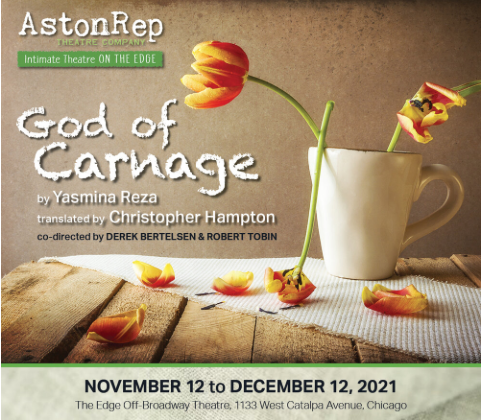 AstonRep Theatre Company is pleased to welcome back audiences this fall with a revival of Yasmina Reza’s frenetic dark comedy God of Carnage, translated by Christopher Hampton and co-directed by directed by Derek Bertelsen* and Robert Tobin*. God of Carnage will play November 12 – December 12, 2021 at The Edge Off-Broadway Theater, 1133 W. Catalpa Ave. in Chicago. Tickets are currently available at www.astonrep.com or by calling (773) 828-9129. I'll be out for the press opening Saturday, November 13th, so check back soon for my full review.

Please note: all patrons will need to provide proof of vaccination when picking up tickets and wear a mask inside the venue during the performance. Please visit AstonRep's safety page for additional COVID-related information.

Two high-strung couples, Alan and Annette Raleigh and Michael and Veronica Novak, decide to meet one evening for a civilized discussion about a playground altercation between their two young sons. What follows is a comically explosive downhill slide from polite, political correctness to full-on character assassination. A no-holds-barred look at what happens when the littlest things end up pushing us completely over the edge.

God of Carnage co-directors Derek Bertelsen and Robert Tobin comment, “We at AstonRep are excited to go back to our roots to produce this though provoking and timeless play, which we also presented nine seasons ago. With a new cast and new venue, this seems like the perfect script for us as we get back to producing live theatre again.”

Curtain Times: Thursdays, Fridays and Saturdays at 7:30 pm; Sundays at 3 pm. Please note: there will not be a performance Thursday, November 25 (Thanksgiving Day).

Yasmina Reza (Playwright) is a French playwright and novelist, based in Paris, whose works have all been multi-award-winning, critical and popular international successes, produced worldwide and translated into 35 languages. She has written seven plays (Conversations After a Burial, The Passage of Winter, ‘Art,’ The Unexpected Man, Life x 3, A Spanish Play, God of Carnage, How You Talk the Game) and six novels (“Hammerklavier,” “Une Desolation (Desolation),” “Adam Haberberg,” “Dans la Luge d'Arthur Schopenhauer,” ‘Nulle Part” and “L'Aube, le Soir ou la Nuit (Dawn Dusk or Night)”). Films include: Le Pique-Nique de Lulu Kreutz, directed by Didier Martiny and Chicas, written and directed by the author.

Derek Bertelsen (Co-Director) joined AstonRep in 2012. Previous directing credits with AstonRep include Doubt, Next Fall, Wit, The Laramie Project, The Crowd You're In With, Equus and co-directing Eleemosynary with Jeremiah Barr. He served as Co-Founder and Artistic Director of The Comrades from 2016-2020 where he directed and produced numerous productions. Summer stock credits include Festival 56, Shawnee Summer Playhouse, and five seasons at Timber Lake Playhouse.

Robert Tobin (Co-Director, God of Carnage) is an actor, director and founder of AstonRep. Select directing credits with the company include 1984, The Women of Lockerbie, and The Water’s Edge. Acting credits with AstonRep include Equus, The Lonesome West, Time Stands Still, Les Liaisons Dangereuses and Doubt among others. Locally, he has worked with Steppenwolf, Chicago Shakespeare Theatre, First Folio, Oak Park Festival Theatre and Redtwist, among others. Regional credits include Colorado, Montana and Utah Shakespeare Festivals. 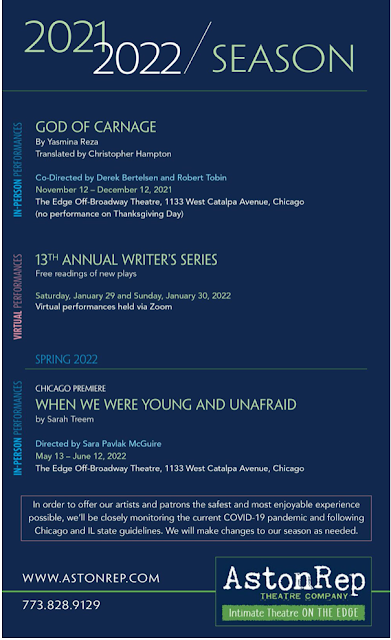 AstonRep Theatre Company was formed in the summer of 2008. Since then, the company has produced numerous full-length productions, along with their annual Writer’s Series. They are currently in residence at The Edge Theater. AstonRep Theatre Company is an ensemble of artists committed to creating exciting, intimate theatrical experiences that go beyond the front door to challenge audiences and spark discussion where the show is not the end of the experience: it is just the beginning.

Posted by Bonnie Kenaz-Mara at 3:40 PM No comments: