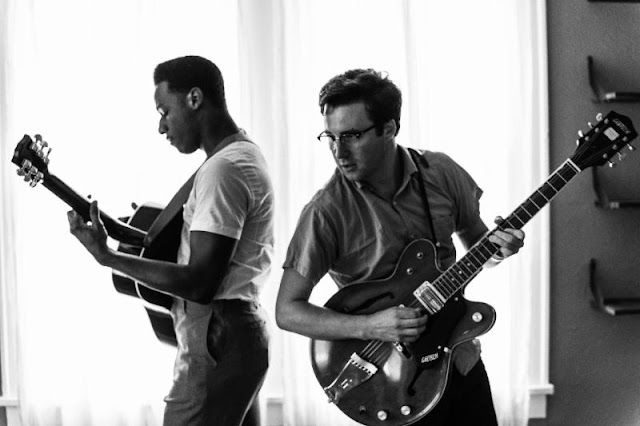 Here at ChiIL Live Shows, we've been eagerly anticipating the new release by Nick Waterhouse. He truly shines live, and will be back out on tour this fall in support of Never Twice. We plan to catch him here in Chi, IL on 10/4 at Bottom Lounge. Full tour dates are below. Whether you're a long time fan or newly discovering the stellar style of Nick Waterhouse, give this a listen. Then come out and catch him live.

On September 30th, Nick Waterhouse will return with his third full-length studio album, Never Twice. Waterhouse recently unveiled the track "Katchi" off of the upcoming album. The track features his pal Leon Bridges and riffs on Bridges' family name for a massage - "Katchi." "Leon and I were in Fort Worth hanging out at a friend's place getting massages. He was laying on the table while I strummed the chords, bare chested, he shouted out "she give me KATCHI!"... His mother's old Louisiana Indian term for 'loving touch'. We rode it out and next thing we know we had a straight cruiser," Waterhouse told The Fader.

Waterhouse also recently unveiled his sweaty grooving video for "Old Place," made up of clips of him performing live earlier this year on Flood. The clips were directed by Emma Pollard.

Never Twice will be released via Innovative Leisure digitally, on CD and 180 gram vinyl. He will head out on a fall U.S. Tour starting on September 24th. Highlights include Music Hall of Williamsburg in Brooklyn on October 8th, The Bottom Lounge in Chicago on October 4th and The Rock and Roll Hotel in Washington DC on October 12th. More tour dates to be announced.

With Never Twice, Nick Waterhouse returned to his original collaborator, producer Michael McHugh (Black Lips, Ty Segall, Allah-Las). McHugh was a local legend in the oft-underrated Orange County music scene that Nick grew up in. McHugh was the first person to ever put Nick on tape and in an effort to re-capture the vibrancy of the Huntington Beach scene of Nick's youth, he invited McHugh up to his current home of San Francisco to work the boards once again. Once he had McHugh on board, Nick began cold-calling his favorite players, all of whom miraculously said yes. Jazz musician Bob Kenmotsu's contributed flute, Tom Waits and Elvis Costello collaborator Ralph Carney on sax, Dr. Lonnie Smith protege Will Blades on Organ and a virtual whose who of muso legends on horns, bass and guitar. The result is an exuberant and impeccably recorded album of songs, showcasing Waterhouse's prowess as a musician and a band-leader.

"The verses are built on the feet-shuffling groove of jazzy drums and keys as Waterhouse bewails his life's stagnation ... He refuses to sit still for long, however, as the funky refrain kicks everything into fifth gear with driving guitar riffs that bring to mind classic rhythm and blues bandstands, all decked in golds and blacks and blues."
- Consequence of Sound

"Swoony vocals that recall
jazz singers like Cab Calloway and Jack Jones, Waterhouse has been hailed as the second coming of soul, infusing a distinctly California surf-rock spin to the genre.'
- VOGUE

"Waterhouse straddles the line between rock grit and smooth, sultry R&B. It's sexy, it's smart, and it's definitely worth another round in a bar in the middle of a dark and stormy night."
- Esquire

Many moons ago Primo Pitino, the DJ of San Francisco's legendary Oldies Night, passed me a copy of his friend Nick Waterhouse's "Some Place." Nick was a local vinyl DJ and the kid working at our Shangri-la, Rooky Ricardo's Records. Though he didn't have a band at the time, Waterhouse assembled some local musicians to cut a one-off 45 in the vein of the electrifying mid-century modern rhythm and blues he loved. I threw "Some Place"on the Technics during sound check a few cities down the line and was blown away from the howling falsetto all the way to the end! I gave it a whirl every night from Texas to Tennessee and all the way back home to New York. Not only were the dancers' feet responding, but they were also asking about the track on a nightly basis. The Nashville Scene was so blown away that they printed a piece on Nick after that single listen. DJs and collectors everywhere wanted it so bad that the little record with the big sound started fetching upwards of $300 on Ebay.

The immediate and unprecedented underground dance party success of Nick's DIY record resulted in a full band, gigs, and, after a number of obstacles, the widely acclaimed 2012 LP Time's All Gone. Nick's music, vision, and fully formed aesthetic caught on globally and he was instantly a fixture at nearly every major nightclub and festival on both sides of the Atlantic, Australia, Japan, and Russia - hitting stages everywhere from Primavera to Montreux Jazz Festival and charting on college, public, and commercial radio.

Only a year after self-releasing his first single, Nick Waterhouse was thrust into the chaos of leading a band, touring, and recording in the big leagues! Pummeling high speed down a bumpy hill of lineup changes, economic problems, and general chaos without any breaks, Nick made it through and the challenges made him more focused. 2014's Holly captured a more experienced artist upping the ante in writing, performance, recording, and production, inspiring a new level of critical and commercial success.

In addition to a jam-packed five years on the road, in the studio, and in the practice space, Waterhouse also produced septuagenarian soul legend Ural Thomas, Los Angeles Latin stars the Boogaloo Assassins, and garage rockers the Allah-las. He's currently collaborating with the likes of young Grammy-nominee Leon Bridges and Steven Colbert bandleader Jon Batiste. The Rolling Stones blast Nick's version of "I Can Only Give You Everything"at stadiums before they go onstage. Vogue hired him to pose with Kendall Jenner. He hipped her to Little Willie John while Anna Wintour complimented his shoes. While a lesser artist would get lost in these distractions, Nick Waterhouse's acclaim only seems to energize him and make him work harder and push his music to the next level.

Nick's latest Never Twice is a culmination, intensification, and realization of everything he's been developing throughout this prolific frenzy. Catchier and loaded with more hits than its predecessors, Nick's new LP is at the same time harder hitting, more rhythmic, more harmonic, more diverse, and more adventurous than any of the excellent work that already separated him from the pack. A cool and elegant post-post-modern cocktail of 1950s r&b and club jazz, mixed with 1960s soul and boogaloo, and shaken with a minimal contemporary sensibility, Never Twice finds the artist taking his time, refining his vision, and speaking with new authority. In five short years Nick Waterhouse has come a long way and it looks like he may have just painted his masterpiece.
Posted by Bonnie Kenaz-Mara at 11:59 AM No comments: