Bengal Tiger at the Baghdad Zoo at Northwestern University's Wirtz Center April 22 – May 1, 2022

“Bengal Tiger” and “Water by the Spoonful”

provide relevant connections to our time

I'll be checking out Rajiv Joseph's Bengal Tiger at the Baghdad Zoo on the 23rd, with my son. I reviewed this play at Chicago's Lookingglass Theatre back in January of 2013 and still recall the deep impact it made. I just reviewed the world premiere of Rajiv Joseph's new smash hit at Steppenwolf last month (King James Review) and can't wait to see Northwestern's take on his award winning words.

"GROUNDBREAKING… I'm tempted to call it the most original drama written so far about the Iraq war, but why sell the work short? The imagination behind it is way too thrillingly genre-busting to be confined within such a limiting category."
—Charles McNulty, Los Angeles Times

The complexities of our current times are reflected in two bold dramas set to take the stage at Virginia Wadsworth Wirtz Center for the Performing Arts on the Evanston campus this spring. “Bengal Tiger at the Baghdad Zoo” blends the realities of war and humor as a tiger haunts the streets of present-day Baghdad seeking the meaning of life. The second offering, “Water by the Spoonful,” is a Pulitzer prize-winning drama about forgiveness, redemption and family in a precarious, virtual world that reverberates in real life.

“Bengal Tiger at the Baghdad Zoo”

“Bengal Tiger at Baghdad Zoo” is based on a real-life incident at the Baghdad Zoo involving two U.S. Marines and an Iraqi translator who encounter a tiger. The play unfolds to reveal how war influences each of these characters.

“When I picked this play, there was no war,” said director Hamid Dehghani, a master’s degree candidate in the School of Communication. “But now, we are unfortunately dealing with a terrible war in Ukraine, making this show even more relevant.”

“Bengal Tiger at the Baghdad Zoo” was written by Steppenwolf Theater ensemble member Rajiv Joseph, and appeared on Broadway in 2011 starring Robin Williams as the Tiger in the actor's Broadway debut.

“I think Rajiv Joseph realized that a play all about war and violence is a challenging play to watch — it does have its moments that are quite intense,” said Ph.D. student Keary Watts, dramaturg for the production. “Joseph layers in comedy and absurdist elements to give the audience a break, in some sense, but also to show that these characters have levity and that these characters are more than just a type. They're more than just soldiers or interpreters, or animals, they are fully formed beings capable of being serious in one moment and lighthearted in the next.”.

Performances of "Bengal Tiger at the Baghdad Zoo" are Fridays and Saturdays at 7:30 p.m. and Sundays at 2 p.m. in the Josephine Louis Theater, 20 Arts Circle Drive, on the Evanston campus. 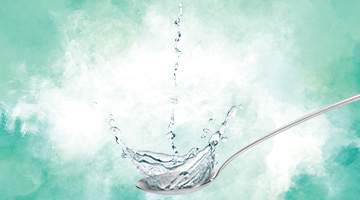 “Water by the Spoonful”

“‘Water by the Spoonful’ is a heartfelt, poetic meditation on people at the brink of redemption and self-discovery that takes place during a time of heightened uncertainty,” said director Ji Won Jeon, a master’s degree candidate in the School of Communication.

“This play is especially relevant given the impact of human connections and the virtual aspects related to the pandemic these past few years,” he said.

Playwright Quiara Alegría Hudes, Tony-nominated for “In the Heights” and screenwriter for the film, tells the story of two families — one connected by birth, one discovered online — who struggle with human connection but reveal that honest relationships are the lifeline in our brutal world.

“‘Water by the Spoonful’ paints a vivid portrait of addicts' struggles,” said Lia Christine Dewey, dramaturg and Northwestern Ph.D. candidate. “It's all about human connections and failing the people you care most about.”

Performances of "Water by the Spoonful" are Thursdays, Fridays and Saturdays at 7:30 p.m. and Sundays at 2 p.m. in the Ethel M. Barber Theater, 30 Arts Circle Drive, on the Evanston campus.

More information and tickets for both shows are available on the Wirtz Center website. Tickets can be purchased by phone at 847-491-7282 or in-person at the Wirtz Center box office, located in the lobby of the Ethel M. Barber Theater, 30 Arts Circle Drive on Northwestern's Evanston campus. Box office hours are Tuesdays through Fridays from 10 a.m. to 5 p.m. and Saturday’s from noon to 4 p.m.  The box office is closed Sundays and Mondays.

The Wirtz Center for the Performing Arts is a member of the Northwestern Arts Circle, which brings together film, humanities, literary arts, music, theater, dance and visual arts.

Posted by Bonnie Kenaz-Mara at 11:59 AM No comments: