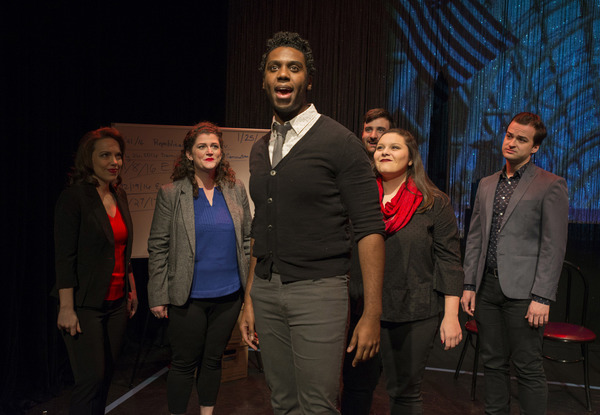 
Review:
Still reeling from a year of Trump's America? Then this is the show for you. This musical has a spot on score as funny as it is thought provoking. Don your pussy hats and protest garb and come on out to We the People and commiserate. You'll enjoy 70 minutes of fun songs sung by a talented cast of 3 women and 3 men. 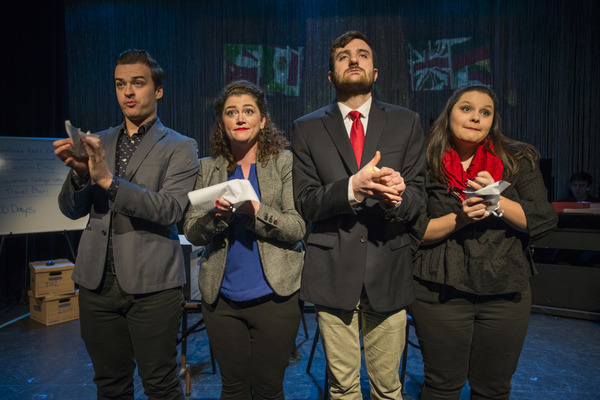 The set design is minimal and the box theatre small, but this cast has a big message to share and they belt it out well. They also make great use of projections on a sparkling fringe backdrop, with Washington DC in a clever silhouette cut out. It's always exciting to see new theatre companies popping up on the Chicago scene and Flying Elephant Productions is off to a fun and relevant start that's a great fit for politically blue Chicago. 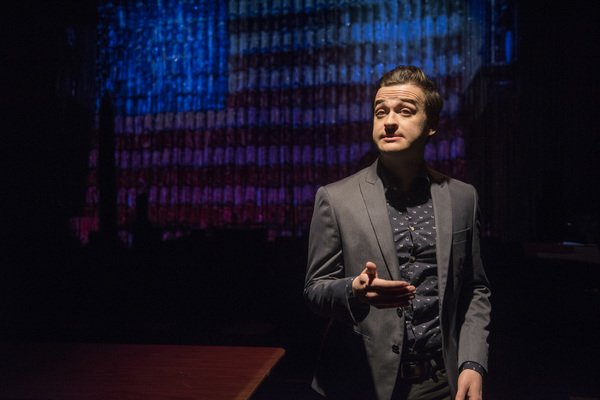 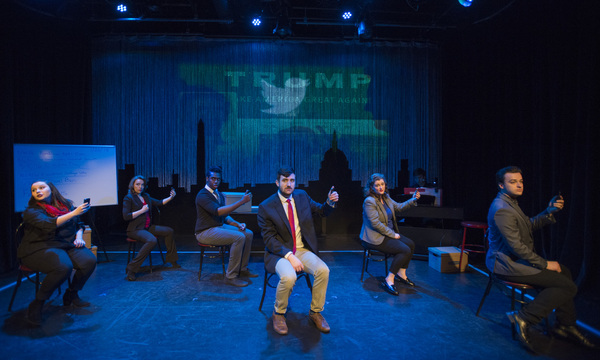 We enjoyed the witty writing and recognition laughs, and left the theatre feeling more empowered and validated. America may have lost it's sanity, dignity, and the possibility of sensible, humane legislation with this past election, but protest music, theatre and art are flourishing. We declare this one a win. 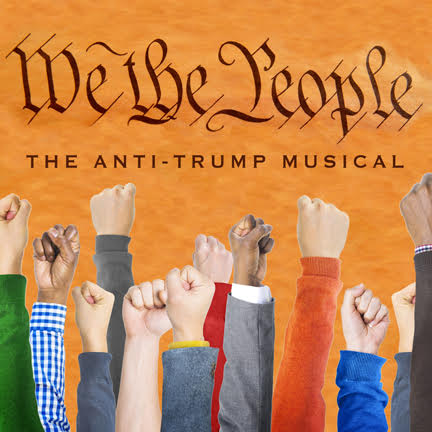 When politics gives you Trump, make a musical! Here at ChiIL Live Shows we're ready for a laugh after a year of cringeworthy executive decisions by 45. Flying Elephant Productions is ready to bring it, with the world premiere of WE THE PEOPLE: The Anti-Trump Musical, to launch their first season.

Flying Elephant Productions is pleased to launch its inaugural season with the world premiere of WE THE PEOPLE: The Anti-Trump Musical, a political musical song cycle about the turbulent 2016 election, with six actors playing 55 characters. This powerful new musical features a book by Sean Chandler, music and lyrics by Leo Schwartz, direction by Derek Van Barham and music direction by Ty Miles. WE THE PEOPLE will play through February 10, 2018 at Stage 773, 1225 W. Belmont Ave. in Chicago. Tickets are currently available at stage773.com, by calling (773) 327-5252 or in person at the Stage 773 box office. 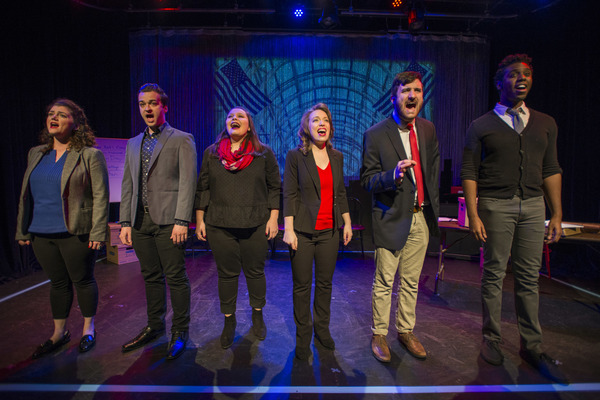 This new political musical song cycle takes audiences from the party conventions through election night and its immediate aftermath into the realization of “Trump’s America.” It all culminates with a call to action from “We The People.” 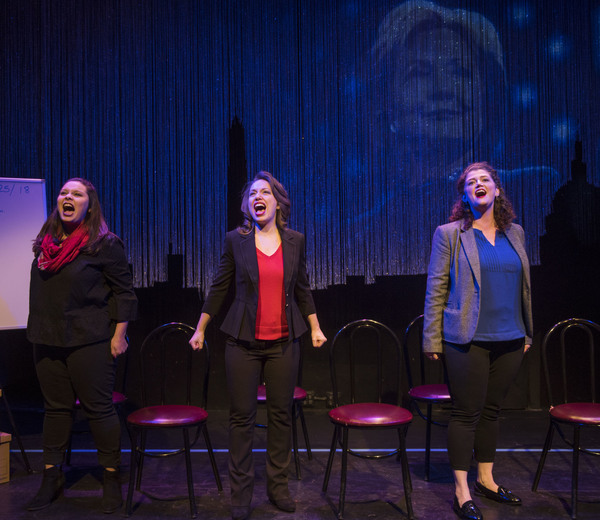 Comments Flying Elephant Productions Executive Director Leo Schwartz, “Often, an artist’s job is to light dark corners and elucidate a way to a new understanding of the world. We see life differently and we passionately express our vision. Whether it’s to expose the workhouses of Victorian London in Dickens’ Oliver Twist, or the ravages of the Spanish Civil War in Picasso’s Guernica, or the social upheaval of the ‘60s with Guess Who’s Coming to Dinner?, art inspires us to reconsider, to act, to challenge. We the People is a call to action to save those things which we hold most dear, our country and our freedom.” 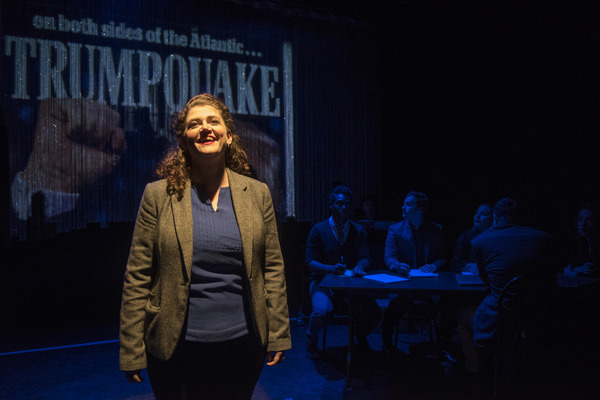 (front left) Elizabeth Rentfro and the cast of Flying Elephant Productions’ world premiere musical WE THE PEOPLE: The Anti-Trump Musical. 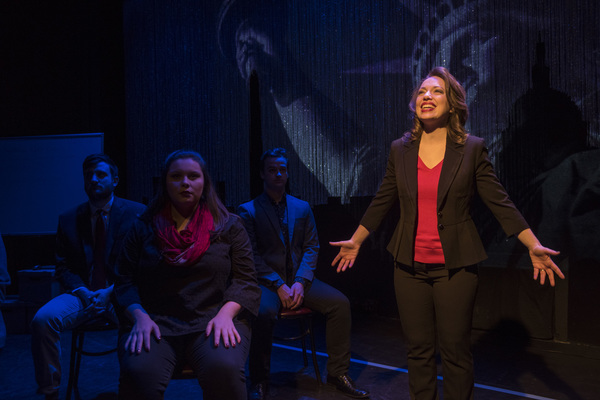 Leo Schwartz (Music & Lyrics) won the Jeff Award for Best New Work in 2013 in addition to numerous other awards and recognition for his works of musical theatre and film scores. His works of theatre and concert music have been presented all around the world by various theatres and organizations. Among his successful musicals are Under A Rainbow Flag, The Book of Merman, PEN, TILL and NAUGHTY!. He is the Executive Director of Flying Elephant Productions. www.leoschwartz.com

Derek Van Barham (Director) is an Artistic Associate with Pride Films & Plays, a member of the Red Tape Theatre ensemble and a former Artistic Director of The Ruckus. For PFP, he has directed Angry Fags (Steppenwolf Garage Repertory), Songs from an Unmade Bed (Jeff nomination: Best Director of a Musical or Revue), PRISCILLA, Queen of the Desert: The Musical and Terrence Mcnally’s Some Men (co-directed by David Zak). He also wrote, directed and choreographed BITE: A Pucking Queer Cabaret and Kill Your Boyfriends. Other directing credits include Miracle! by Dan Savage and Skooby Don't (Hell in a Handbag), Three Days of Rain (Boho Theatre), Trash and Deep in the Heart of Tuna (New American Folk Theatre) and From These Fatal Loins (The Ruckus). He has choreographed for Black Button Eyes (Coraline the Musical, Goblin Market, Amour), The Plagiarists, Inappropriate Theatre, Brain Surgeon Theatre and Salonathon. He can currently be seen improvising with the LGBT team Baby Wine (Fridays at The Annoyance). He was recently named one of Windy City Times 30 Under 30, recognizing individuals from Chicago's LGBTQ community. MFA: Chicago College of Performing Arts at Roosevelt University.

Ty Miles (Music Director) is so excited to be working again on such a timely work. Classically trained in music composition and piano performance, Ty has written original songs and incidental music for several theater works including Derek Van Barham’s adaptation of Aristophanes’ Wealth and Dan Caffery’s play Gregor and the Squonk. He is also proud to have worked with Leo Schwartz before as assistant music director for the last two summer’s productions of We The People and PEN. 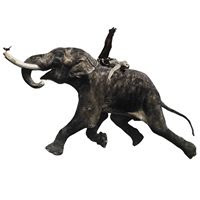 About Flying Elephant Productions
Nothing is more challenging than getting a creative career off the ground. In many ways, it would be easier to get an elephant to fly. Flying Elephant Productions is dedicated to presenting new works, musicals and plays, that are dynamic, impassioned, and, in our belief, prone to fly. We not only give them first voice, but will also work with the creators to market and promote their work further. Our success at production and our entrepreneurial experience make us a uniquely qualified voice in theatre. For additional information, visit www.flyingelephantproductions.com.
Posted by Bonnie Kenaz-Mara at 10:33 PM