ChiIL Live Shows had a chance to check out Superboobs:   A Superhero Burlesque Adventure and also Attend The Tale of Danny Tanner:  A Full House Musical.


Their Burlesque is playful, grrrl powered fun for couples or a night out.   All body types are represented, not just sleek, airbrushed Barbie types.   Most of all, the actors look like they're having a great time, thoroughly enjoying their campy parodies.   Seeing a Gorilla Tango Burlesque show is kinda like spying on a girly slumber party or 21+ kids playing R rated charades with a costume bin.


We're super stoked  Attend The Tale of Danny Tanner:  A Full House Musical has been extended into July.  Check the link for show dates and times.  This show was horribly wrong in ALL the right ways.   I haven't laughed this hard in ages.  The audience was on the floor laughing from the time the opening number echoed forth.  The actors' parodies were so funny I can't believe the cast actually made it through the whole show without cracking, though I saw a few tell tale facial twitches.   Attend the tale....before it's too late.   If you drove, you might want to forgo the lobby bar on this one...lest someone in the audience gets any ideas!   There's always the blue line el--Western stop a short walk away.    However you get there, go already.

In this darkly comedic musical, the true life of Danny Tanner and is family is exposed; promises will be broken, sinister paths explored, lives may be lost, and yes, songs will be sung. Whether you're a member of the Full House fan club or scoff in a superior fashion when you hear someone utter "Cut It Out"; you will find both a touch of nostalgia and an illuminating light shining brightly on the Tanners' most clandestine realities. Come see the Tanners as you've never seen them before. Attend the Tale.


"An hour of gleefully over-the-top songs about murder and pinky swears..."
Centerstage Chicago

"An interesting, dark twist on the "Full House" we all know and love. The choreography is stylistic and interesting, the actors believable and the harmonies pretty perfect."
Lady Art Chicago

Gorilla Tango Says:
Haven't seen one of our new shows? Check us out - Fridays and Saturdays at 9pm and 10:30pm;
visit www.gorillatango.com or call 773-598-4549 for tickets and showtimes!

HEY! WE LIKE WINNING!
PLEASE ALSO CONSIDER VOTING FOR Gorilla Tango Motion Picture's upcoming film
"YOU ARE NOT ALONE"
for IndieWire's Project of the Month:
http://www.indiewire.com/article/decide-who-talks-to-the-tribeca-film-institute-vote-for-junes-project-of-the-month#**Voting ends TOMORROW (Friday, July 6 at 5pm).**

Posted by Bonnie Kenaz-Mara at 10:53 PM No comments:

ACT OUT: ATTEND THE TALE OF DANNY TANNER: A FULL HOUSE MUSICAL At Gorilla Tango 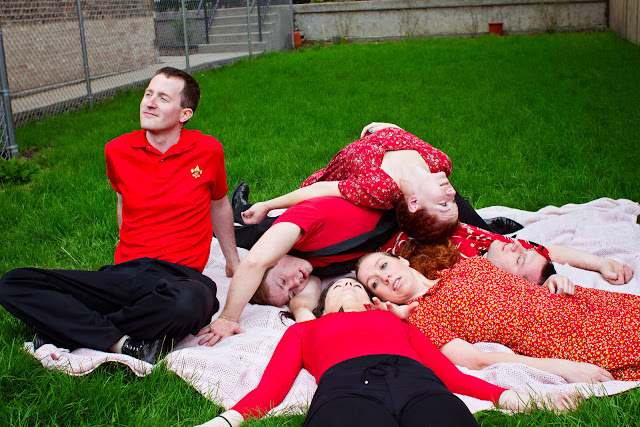 Heads up--head out.   But ya may not want to drink and drive after this show...

We gave you the heads up last month.   Now it's time to head out...to Gorilla Tango Theatre tonight!

Wake up San Fran, if you can… It’s been seven years since Danny Tanner’s wife – the sweet, sweet Pamela Tanner – was tragically killed by a drunk driver, throwing the Tanners’ lives into equal parts chaos and hilarity. Every year since then, Danny, his brother-in-law Jesse, and best friend Joey kill a drunk driver on the anniversary of Pamela’s death. This is the year everything goes wrong… Darkly comedic, ATTEND THE TALE OF DANNY TANNER: A FULL HOUSE MUSICAL performs Wednesdays at 7:30pm, May 9 – June 27, 2012 at 1919 N. Milwaukee. Tickets are $15; www.gorillatango.com or 773-598-4549 for tickets and more info. In this original musical, the true life of Danny Tanner and his family is exposed; promises will be broken, sinister paths explored, lives (maybe even of main characters!) will be lost, and yes, songs will be sung. Whether you're a member of the Full House fan club or scoff in a superior fashion when you hear someone utter "Cut It Out", you will find both a touch of nostalgia and an illuminating light shining brightly on the Tanners' most clandestine realities in this black comedy with a twist. Come see the Tanners as you've never seen them before. Attend the Tale.The idea for a Sweeney Todd-esque Full House musical came to Katie Johnston-Smith while she was brainstorming new parody show ideas for Gorilla Tango. Katie knew Chris Gorton through various improv ventures and was aware of his songwriting talents. She approached him with the show idea in November 2011 and together they started writing and developing what would be come ATTEND THE TALE…. Once all of the songs were mostly completed, they enlisted the assistance of another local musician, Tara Trudel to help put the finishing touches on the show, musically speaking. This is the first musical that Johnston-Smith and Gorton have written, although all they are both well versed (pun intended) in improvised musicals and song writing.Katie Johnston-Smith, a native of Pittsburgh, has a Bachelor's Degree in Music with an emphasis in musical theatre performance from Belmont University in Nashville. She can be seen performing around town with Second City Training Center's Musical House Ensemble Infinite Sundaes, and as a featured member of The Cupid Players.  She is also Gorilla Tango Theatre Bucktown's Executive Producer.  Chris Gorton sang his first song at the age of four, saw his first musical at the age of eight, and has been in love with singing ever since. He's performed numerous musicals, been in a variety of shows, learned about harmonies in his college a capella group, and then sang on a cruise ship. He has no musical training other than singing in chorus in elementary and high school, but he loves music passionately, so that makes up for it. He writes songs for fun, and he makes up other songs for more fun. He taught himself the guitar. Combining all of his loves he wrote his first musical; this is that musical. He plans to write more. He currently performs improv and sketch comedy throughout Chicago.Written by Chris Gorton and Katie Johnston-SmithMusic written by Chris Gorton, Katie Johnston-Smith, and Tara TrudelDirected by Kelly WilliamsChoreographed by Nikki PierceFight Choreography by Bobby HoffmanMusically Directed by Rhapsody SnyderCostumes and props by Vanessa WalilkoFeaturing: Rob Speer (Danny Tanner), Katie Johnston-Smith (DJ Tanner), Meghan M. Hillmeyer (Stephanie Tanner), Ali Keirn (Michelle Tanner), James Dolbeare (Jesse Katsopolis), Chris Gorton (Joey Gladstone), Tom Daily (Man, Steve, Woodchuck, etc), and Miryam Andrews (Woman, Becky, Kimmy Gibbler, etc). Gorilla Tango Theatre (GTT) provides year-round theatrical venues where audiences of all ages can consistently go to see a wide variety of talented artists. GTT exists to provide artists with an opportunity to produce their work in professional environment. GTT was created by Dan Abbate and boasts two venues: an 80-seat performance space in Bucktown and a 150-seat performance space in Skokie. GTT Bucktown is conveniently located at the intersection of Western and Milwaukee in Chicago's Bucktown neighborhood. Easily accessible by public transportation, GTT is steps away from the Western Blue Line stop and the #49 Western, #73 Armitage and #56 Milwaukee buses. Street parking is readily available.  Gorilla Tango’s Skokie Theatre is located in the heart of Downtown Skokie; street and lot parking available. With shows for all ages, all GTT performances are on a rating system, similar to the one used in movie theatres. GTT offers a variety of affordable beer and wine for purchase. Consult the website Calendar for all Gorilla Tango shows, locations, rating information, tickets, and more.www.gorillatango.com – 773.598.4549Gorilla Tango (Bucktown) - 1919 N. Milwaukee Ave., Chicago, IL 60647Gorilla Tango’s Skokie Theatre - 7924 Lincoln Ave. Skokie, IL 60077
Posted by Bonnie Kenaz-Mara at 6:28 PM No comments: