ACT OUT HOLIDAY: About Face Theatre Presents The Return of the Hit Holiday Musical WE THREE LIZAS

New Book and Expanded Score!
About Face Theatre Presents
The Return of the Hit Holiday Musical
WE THREE LIZAS

Feeling "Mary" and Gay this holiday season?   You'll be in good company at We Three Lizas!   Embrace your inner diva and come on out for a fabulous night.

WeThreeLizas-5 (left to right) Danielle Plisz and Scott Duff in a publicity image for About Face Theatre’s production of WE THREE LIZAS with book & lyrics by Scott Bradley, music & additional lyrics by Alan Schmuckler and directed by Scott Ferguson.  Photo by Cheryl Mann.

About Face Theatre’s sparkly, queer holiday hit musical WE THREE LIZAS is back and better than ever – with a new book and expanded score!  Featuring book and lyrics by Scott Bradley*, music and additional lyrics by Alan Schmuckler, direction by Scott Ferguson*, music direction by Aaron Benham and choreography by Patrick Andrews*, WE THREE LIZAS will play November 27, 2013 – January 5, 2014 at Stage 773, 1225 W. Belmont Ave. in Chicago. Tickets are available online at www.aboutfacetheatre.com or www.stage773.com, in person at the Stage 773 Box Office (1225 W. Belmont Ave., Chicago) or by calling (773) 327-5252.  The press opening is Thursday, December 5 at 7:30 pm.

Box maker Conrad Ticklebottom’s life has hit a block. Once, Conrad and his purple box ignited an entire movement in art and design, but now he finds himself alone, forgotten and teetering on ruin. The holidays bring three magical figures to his door – a trio of Liza Minnellis to escort him on a fabulous journey through what-was, what-could-be and what-the-f*?!, redeeming his lost promise and re-inventing a brand-new Conrad Ticklebottom.  It’s a quirky holiday musical tale of hope, transformation… and the power of Liza!

“Liza’s back and she’s better than ever! After having played to sold-out audiences in 2012 at the Steppenwolf Garage and in concert at Joe’s Pub in New York this summer, I’m thrilled to bring back this hilarious and moving holiday musical,” comments About Face Artistic Director Andrew Volkoff. “In this year of development at About Face, we are proud to support the continued growth of this project and the artists who’ve created it.  Artistic Associate Scott Bradley and composer Alan Schmuckler have developed a sensational new book and score and we’re delighted to share it with Chicago audiences.  If you missed it last year, get your tickets now: it’s bound to sell out again this year!  And if you saw it last year, you’ve got to see this fantastic new version and make We Three Lizas your new holiday tradition!” adds Volkoff. 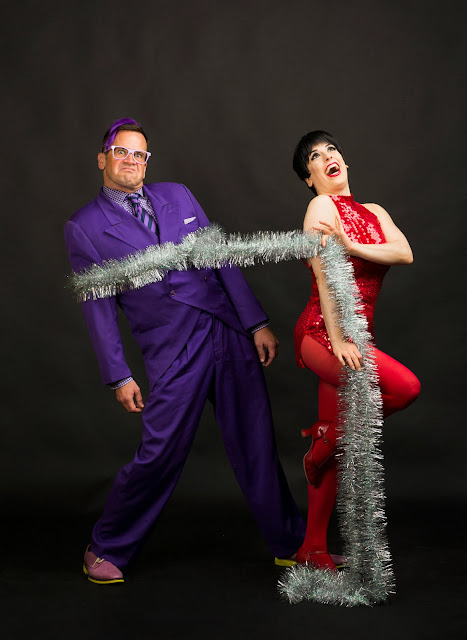 WeThreeLizas-3 (left to right) Scott Duff and Danielle Plisz in a publicity image for About Face Theatre’s production of WE THREE LIZAS with book & lyrics by Scott Bradley, music & additional lyrics by Alan Schmuckler and directed by Scott Ferguson.  Photo by Cheryl Mann.

Alan Schmuckler (Music and Additional Lyrics) will see his new musical Days Like Today (book by Laura Eason) premiere at Chicago's Writers' Theatre in 2014. His musical The Emperor’s New Clothes (book by David Holstein) enjoyed a critically acclaimed premiere production at the Tony-winning Chicago Shakespeare Theater, and received its international debut at the Stage Artz Theatre Company in Sydney, Australia. He and Michael Mahler co-wrote book, music and lyrics for Chicago Shakespeare’s How Can You Run with a Shell on Your Back?, which premiered and remounted in 2007, and has since been produced nationwide, including at the Chicago Humanities Festival, the National Alliance for Music Theatre’s 21st Annual Festival of New Musicals, and at theaters and schools nationwide. His concert credits include Alan Schmuckler: I Miss The City (Joe’s Pub, NYC); and, with Mahler, the Kennedy Center’s Millennium Stage (Washington, D.C.), and numerous Chicago gigs with their band, the Lincoln Squares, whose debut EP, The Lincoln Squares!, is available online. Alan’s music and lyrics have been featured in the Fourth Annual Broadway in South Africa Gala; the York Theatre Company’s NEO6 Benefit Concert; the Chicago “Monday Nights, New Voices” series; and the National Alliance for Music Theatre’s New Works Summit and Songwriters’ Showcase. Alan is a three-time Joseph Jefferson-nominated actor and recently appeared in Nikolai and the Others, (Lincoln Center Theater). He is a proud alum of Northwestern University and the School at Steppenwolf, and a member of AEA and ASCAP.

Scott Ferguson (Director) is the Co-Founder and Artistic Director of Theatrebam Chicago where he wrote and created the hit shows, Schoolhouse Rock Live!, Schoolhouse Rock Live Too! and The Main Street Kids’ Club: A MathStart Musical. Scott has directed the SRLive! National Tours (’99-’01) with Troupe American, Inc., the Off-Broadway productions at The Atlantic and the Lamb’s Little Theatre, as well as many productions across the country. Scott is a proud Artistic Associate of About Face Theatre, where he directed Xena Live! Episode One, the Jeff Nominated Xena Live! Episode Two, Xena Lives! The Musical and Say You Love Satan and last year's We Three Lizas. As a Founding Collective Member of Bailiwick Chicago, he directed the critically acclaimed Aida and Bloody Bloody Andrew Jackson. Scott has also directed for Hell in a Handbag, Filament, Chicago Children’s Theatre, Drury Lane Oakbrook and Watertower. For the former Bailiwick Repertory, Scott directed the Non-Equity Jeff Nominated A Man of No Importance as well as The Cousins Grimm. Regionally, he has directed for Playhouse On The Square in Memphis, The Fulton Opera House in Lancaster, PA, The Wohlfahrt Haus Theatre in Wytheville, Virginia, Rhodes College and New Trier High School. Favorites include; The Rocky Horror Show, Return To The Forbidden Planet, The Mystery Of Irma Vep, Evita, Bat Boy The Musical, Jekyll & Hyde, Floyd Collins, Disney’s Aida, Beauty And The Beast, Saucy Jack & The Space Vixens, Year With Frog And Toad, Big River, Altar Boyz, Xanadu and Pippin.

Aaron Benham (Musical Director) is a local music director, conductor, arranger and composer. Chicago credits: A Cole Porter Songbook and Time After Time: The Songs of Jule Styne, Theo-Ubique; Anyone Can Whistle and Putting it Together, Porchlight Music Theatre; Sweet Charity and Days Like Today, Writer's Theatre; Avenue Q and Spamalot, NightBlue; RockShow(Tunes) and The Rise of the Numberless, Bailiwick Chicago.  He is a member of the Improvised Sondheim Project, and has performed locally and aboard the Norwegian Epic cruise ship with Second City.  Up next: The Sweet Smell of Success, Kokandy Productions, and the Chicago premiere of Carrie with Bailiwick Chicago.  BFA, Emerson College.

About Face Theatre (Andrew Volkoff, Artistic Director) is one of Chicago’s most acclaimed theatre companies, and is a national leader in the development of new work exploring gender and sexual identity.  Since its founding by Kyle Hall and Eric Rosen in 1995, the company has premiered more than 48 world premieres by writers and directors who have been recognized with several Tony Awards, The Pulitzer Prize for Drama, The MacArthur Fellowship and dozens of Joseph Jefferson Awards. 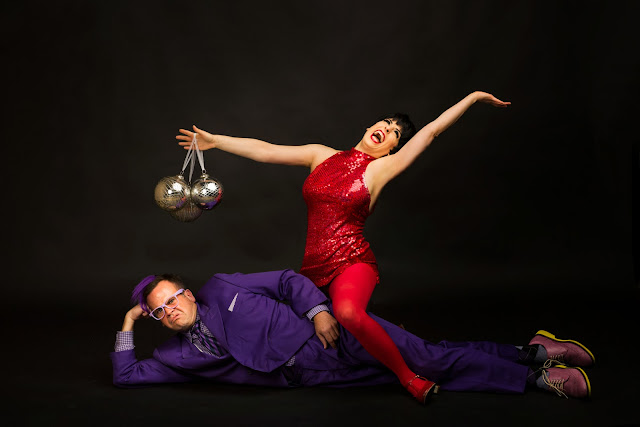 WeThreeLizas-1 (pictured) Danielle Plisz (above) and Scott Duff (below) in a publicity image for About Face Theatre’s production of WE THREE LIZAS with book & lyrics by Scott Bradley, music & additional lyrics by Alan Schmuckler and directed by Scott Ferguson.  Photo by Cheryl Mann.
Posted by Bonnie Kenaz-Mara at 3:13 PM No comments: