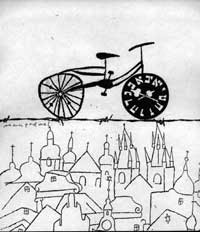 The Last Cyclist is produced in association with the National Pastime Theater and is made possible by the generous support of the Dramatists Guild Fund, the Jewish Community Foundation and Robert Klutznick and the Javitch Foundation.
Posted by Bonnie Kenaz-Mara at 5:28 PM No comments: