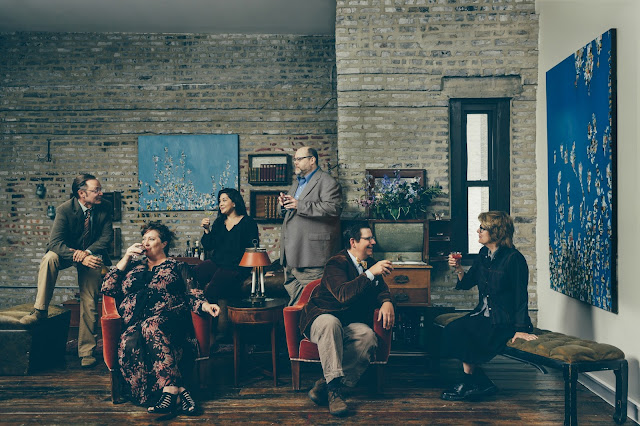 Cast of Evening at the Talk House. Photo by Mike Hari

Here at ChiIL Live Shows we've long been fans of Wallace Shawn's acting, and we're eagerly anticipating seeing his writing performed in the capable hands of another favorite of ours, A Red Orchid. We can't wait to catch the press opening of what's described as an ultra-dark comedy. Check back soon for our full review.

Remember when you felt you could do anything, when there was still nothing to fear? Evening at the Talk House is a reunion at your favorite club, where old friends cozy up, raise a glass and remember gentler times when culture had value and terror wasn't the every day. This ultra-dark comedy invites us all to celebrate the 10th anniversary of the opening night of Robert's under-appreciated masterpiece, Midnight in a Clearing with Moon and Stars.

Director and Ensemble Member Shade Murray notes, “set in the gossipy world of theatre folk, Evening at the Talk House suggests that in our jittery and uneasy time, words just might speak louder than action. It’s a smart and juicy play filled with accusations, innuendo, alternative facts and guilt by association. It's like the Algonquin Round Table meets The Crucible."

About the Artists
Wallace Shawn (Playwright) is an actor, voice actor, playwright, essayist and comedian. Recognizable to most of the world as a character actor: he made a memorable debut in Woody Allen’s Manhattan (1979) and, since then, has appeared in movies as diverse as The Bostonians and The Princess Bride and on the popular television series Gossip Girl. He has also starred in two films made with his longtime collaborator, André Gregory: My Dinner with André and Vanya on 42nd Street, which were directed by Louis Malle. Shawn’s first play, Four Meals in May, was written when he was still at Oxford. Following a trio of early works—The Family Play, The Hotel Play, The Hospital Play—Shawn’s first professional production came in 1975 with Our Late Night, directed by Gregory. Since then, he has written several other plays: A Thought in Three Parts, Marie and Bruce, Aunt Dan and Lemon, The Fever, The Designated Mourner, Grasses of a Thousand Colors and Evening At the Talk House. He has also adapted Machiavelli’s The Mandrake and Brecht’s Threepenny Opera.

Shade Murray (Director) is an ensemble member and Associate Artistic Director of A Red Orchid Theatre, where he has directed the world premieres of Brett Neveu’s Pilgrim’s Progress and Ike Holter’s Sender, as well as productions of David Adjmi’s 3C, Marisa Wegrzyn’s Mud Blue Sky and The Butcher of Baraboo, Annie Baker’s The Aliens, Nick Jones’ Trevor, Mike Leigh’s Abigail’s Party and Kimberly Akimbo by David Lindsay-Abaire.  He also performed in the A Red Orchid production of The Mutilated.  Other directing credits include Steppenwolf Theatre Company, The House Theater, Steep Theater, Second City, Writers’ Theater and elsewhere.  Shade is a lecturer at University of Chicago and teaches at DePaul University and Acting Studio Chicago.
Lance Baker (Robert) has been an official ensemble member of A Red Orchid for around five thousand days, but before that he first appeared in The Grey Zone, directed by Dado in 2001. Since then, he's played the lead in Michael Shannon's directorial debut, Ionesco's Hunger and Thirst. Further AROT acting credits: The Mandrake, Becky Shaw, and The Mutilated. As a director at AROT: the world premiere of Brett Neveu's The Earl, the Chicago premiere of The Agony and the Ecstasy of Steve Jobs, and co-directed A Very Merry Unauthorized Children's Scientology Pageant.

Kirsten Fitzgerald (Annette) has been a member of the Artistic Ensemble at A Red Orchid since 2001. Her performances here at home include three world premieres by Brett Neveu; Pilgrim’s Progress, Weapon of Mass Impact and Four Murders. Other AROT performances include The Room, Mud Blue Sky, The Butcher of Baraboo, The New Electric Ballroom, Abigail's Party, The Sea Horse [Jeff Award], Pumpgirl, Mr. Bundy, The Killer and more. Other Chicago credits include Mary Page Marlowe, The Qualms, Clybourne Park, The Elephant Man, and A Streetcar Named Desire (Steppenwolf Theatre); Appropriate (Victory Gardens), and work with Defiant Theatre, Circle Theatre, Next, Remy Bumppo, Chicago Shakespeare Theatre, The Goodman, Shattered Globe, Famous Door, Plasticene and the Utah Shakespeare Festival among others. You can see her on the small screen now in The Exorcist (FOX) and other TV credits include Sirens (USA), Chicago Fire (NBC), ER (NBC) and Underemployed (MTV).

Miguel Nunez (Tom) makes his A Red Orchid Theatre debut. He was last seen in the rolling world premiere of Into The Beautiful North (16th Street Theatre) which he also Co-directed. Other selected Chicago credits include What Of The Night? (Cor/Stage Left); Bobby Clearly (Steep Theatre); The Play About my Dad (Raven Theatre); El Pasado Nunca Se Termina (Lyric Opera of Chicago/National Tour); Romulus (Oracle Theatre); Death and the Maiden, Oedipus El Rey (U/S Victory Gardens); PINKOLANDIA, Yasmina's Necklace (16th Street Theatre); The Three Musketeers, The Blue Shadow (Lifeline Theatre); I Put the Fear of Mexico In ‘em (Teatro Vista); The Ghost is Here (Vitalist Theatre). He is an artistic associate at 16th Street Theatre. Miguel has trained at Black Box in Chicago and at the National Theater University in Caracas, Venezuela.

Sadieh Rifai (Jane) is new to A Red Orchid, but not to Chicago. Her credits include the world premiere of The Humans(Jeff Award nomination for Best Ensemble) at American Theater Company along with The Amish Project,Hedwig and the Angry Inch (co-production with About Face Theatre),The Original Grease, Columbinus, Doubt, Agnes of God and Speech and Debate(After Dark Award for Outstanding Performance). Other Chicago credits include Ski Dubai (Steppenwolf First Look), The Piano Teacher (Next Theatre) and Merchant of Venice (Silk Road Rising). Film credits include The Wise Kids, Nate and Margaret and Olympia. Television credits include Chicago Med and Amazon's Patriot in which she plays the recurring role of Mahtma El-Mashad. She is a graduate of the School at Steppenwolf and received the Princess Grace Award in 2011.

Noah Simon (Bill) has previously been seen on A Red Orchid’s stage in The Earl and Trevor. As a veteran of Chicago’s storefront theatre community, he’s worked with such companies as Goodman Theatre, ATC, Shattered Globe, Raven, Factory, Strawdog, Remy Bumppo, Red Twist, and appeared last winter in 16th Street Theatre’s critically acclaimed production of Blizzard ’67 by Jon Steinhagen. Noah and his three Blizzard castmates have been nominated for the 2017 Joseph Jefferson Award for Best Ensemble. Regionally, Noah has worked with Peninsula Players and Lakeside Shakespeare Theatre where he most recently played the role of Shylock in their production of The Merchant of Venice. Noah is a voiceover artist and is a proud member of SAG/AFTRA. He teaches acting and improvisation at Aurora University and Voiceover at Vagabond School of the Arts. He has a BA in Theatre from Butler University and an MFA in Acting from the Theatre School at Depaul University.

Doug Vickers (Ted) is an ensemble member at A Red Orchid Theatre, where he most recently appeared in The Nether. Some of his other favorite appearances at Red Orchid have been in Accidentally Like a Martyr, Simpatico, Four Murders, The Grey Zone, and Hunger and Thirst. Over the years at Red Orchid, he has also worked in administrative capacities in the areas of grant writing and production. Doug was the recipient of the Joseph Jefferson Award for The Best Man at Remy Bumppo Theatre (Best Cameo Performance). He has appeared at many other theatres around town including Chicago Shakespeare (Comedy of Errors), Next Theatre (R.I.P.) (U.N. Inspector, Turcaret the Financier) ,Court Theatre, Famous Door Theatre, Trap Door Theatre, and Hell in a Handbag. Regional: Illinois Shakespeare Festival  TV: Underemployed (MTV) He is from Evanston IL and he holds a Bachelors Degree in English from Northwestern University-School of Continuing Studies and has done graduate level work in English at NU as well.

Natalie West (Nellie) is an ensemble member at A Red Orchid Theatre where she last appeared in The Mutilated. Other AROT productions include Strandline, Mud Blue Sky, The Butcher of Baraboo and Abigail's Party. Over the years she has appeared in shows at The Goodman, Steppenwolf, Northlight and others. She is a former ensemble member of Remains Theatre. Natalie was a regular on the television show Roseanne as Crystal. Natalie is a recipient of three Jeff Awards for supporting actress for The Butcher of Baraboo, Abigail's Party at A Red Orchid and Life and Limb at Wisdom Bridge. She holds a MSW from Loyola University Chicago, a BA in Theatre at Indiana University and she attended Webber Douglas Academy in London.

Flashpasses may be purchased from the Box Office at 1531 N. Wells Street, Monday through Friday from 12 pm to 5 pm, by telephone during office hours by dialing (312) 943-8722, or online at www.aredorchidtheatre.org. Individual tickets will go on sale at a later date.

With our 25th season of ambitious and powerful storytelling, we are thrilled to announce the launch of A Red Orchid Theatre’s Red League.  At $1k or more, The Red League represents a donor community of our most committed and impactful cultural investors. Every profound and shocking moment on our stage is made possible through their critical annual contributions. Their philanthropic leadership fosters the development of raw and relevant work, creates a platform for our talented ensemble to reach new audiences, and ensures that A Red Orchid Theatre remains a source for honest, compassionate, and aesthetically rigorous theatre.

About A Red Orchid
A Red Orchid Theatre has served as an artistic focal point in the heart of the Old Town community of Chicago since 1993 and was honored this year with a 2016 MacArthur Award for Creative and Effective Institutions. Over the past 24 years, its Resident Ensemble has welcomed into its fold an impressive array of award-winning actors, playwrights and theatre artists with the firm belief that live theatre is the greatest sustenance for the human spirit. A Red Orchid is well known and highly acclaimed for its fearless approach to performance and design in the service of unflinchingly intimate stories. In addition to its professional season, the company is also committed to an OrKids (youth) project and hosts The Incubator (providing artists with space and time to explore new work, new forms and new artistic collaborations).

Posted by Bonnie Kenaz-Mara at 6:10 PM No comments: