About Face Theatre is excited to announce plans for its 28th season. Dedicated to advancing LGBTQ+ equity through community building, education, and performance, AFT will present two world-premiere productions at The Den Theatre in Wicker Park, as well as workshops and projects in development.

About Face’s 2022-2023 season will begin in November 2022 with the world premiere of Omer Abbas Salem’s new play Mosque4Mosque, directed by Sophiyaa Nayar. Mosque4Mosque is a family comedy about a queer Arab-American Muslim man navigating his first real relationship while his relentlessly caring immigrant mother tries to find the perfect man for him to marry. In May 2023 the company will present the world premiere of Gender Play, or what you Will, a new one-person performance co-created by Will Wilhelm and Erin Murray. Gender Play, or what you Will is a highly personal exploration of the works of William Shakespeare through a gender-imaginative lens. 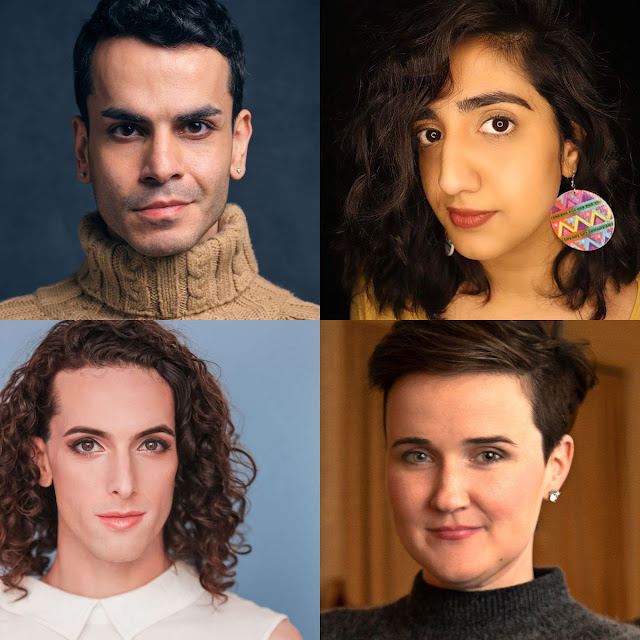 Throughout the year, About Face Theatre will continue its commitment to leadership development, intergenerational collaboration, and learning opportunities. AFT’s Green Room Collective will enter its second full year supporting early career LGBTQ+ arts leaders with part-time staff roles. In addition, creative workshops will explore new possibilities for programs asking, "Who are we becoming? What are our collective dreams? How will we grow together?" Further details will be available on the website later this fall.

“Connect, grow, and find joy with us”, invites About Face Theatre Artistic Director, Megan Carney. “The stories in our upcoming season combine bravery and humor to deepen community connections and move us toward a more just world. These productions combined with signature About Face programs and new work development promise a year of visionary collaborations ahead.”

Check the calendar for schedule details around holidays. All performances will take place at The Den Theatre, 1331 N Milwaukee Ave, Chicago

Pay-what-you-can tickets ($5-$35) will go on sale in the coming weeks at The Den Theatre box office or About Face Theatre’s website.

Ibrahim is an average 30-something queer Arab-American Muslim who is constantly being reminded how unmarried he is by his relentlessly caring immigrant mother, Sara. Having helped raise his smart, popular, cheerleading hijabi younger sister, Ibrahim has always been comfortable sinking into the background. Normal job, quiet life, easy men. But on the precipice of finding what could be his first real relationship, Sara feels compelled to take Ibrahim's future into her own hands by attempting to find the perfect man for him to marry. Mosque4Mosque is a comedy about a normal Muslim American family that asks us to wrestle with what we believe normal to be.

Mosque4Mosque was workshopped and performed virtually through the Criminal Queerness Festival and Dixon Place in July 2020, directed by Sharifa Elkady. It was selected to be Steppenwolf Theatre's SCOUT Development play for 2020 and received a 30-hour workshop and a fully produced reading in March of 2021. This world premiere production at About Face Theatre will receive dramaturgical and community engagement support from Silk Road Rising.

Director Sophiyaa Nayar says “Activist and author adrienne maree brown describes visionary fiction as centering marginalized peoples, ‘aiming neither for utopia nor dystopia, but that harder, more realistic place in the middle.’ Mosque4Mosque does exactly that -- it reimagines what our relationship with religion, queerness, and family could look like. It dismantles stereotypes about Arab, Muslim, and immigrant families, which are often harmfully painted in the media as violent caricatures or side-plot comedic relief.

“I can see myself in Abbas’ work. I see my family in it,” she continued. “I see Arab friends I've grown up with and their families in it. He paints these characters with such concrete detail and infuses them with so much life that it’s hard not to root for them. A friend once talked about how you can smell his plays when you read them, and I think that holds especially true with Mosque4Mosque.”

Gender Play, or what you Will

Co-Created by Will Wilhelm and Erin Murray

Performed by Will Wilhelm

Pay-what-you-can tickets ($5-$35) will go on sale in the coming weeks at The Den Theatre box office or About Face Theatre’s website.

The classic works of Shakespeare are filled with queerness: cross-dressing, homoeroticism, the fluidity of masculine and feminine gender roles, and so many phallic puns! In this one-person show, actor Will Wilhelm conjures the spirit of playwright William Shakespeare to examine the Bard’s works through their own queer perspectives and life experiences. Together, Will & Will propose a new reason to keep these old stories alive: not as a relic of what our society has been, but as a testament to seeing ourselves reflected in history. Gender Play, or what you Will invites guests to share a mystical evening of laughter, poetry, and tarot that coalesces into a celebration of queer joy.

Gender Play, or what you Will explores fresh, contemporary pathways into the classics. The play was developed with support from About Face Theatre, Island Shakespeare Festival, Northwestern University and the Arts Midwest’s Grow, Invest, Gather Fund.

“I love the conversation of Gender Play,” says director Erin Murray. “It is a smart exchange about how and why we continue to stage classic theatre that leaves the viewer feeling inspired and informed. Will Wilhelm is as vivacious as they are provocative.”

“And yet,” she says, “if you haven't picked up a play since your 9th grade R&J reading assignment, this show will happily carry you on its back and serve you a smile. It asks you to be gentle with yourself and those around you as it secures you into a wild ride through history and personal stories. In Gender Play, or what you Will, the audiences will find new peace in being once again part of a collective.”

Leadership and education programming at About Face Theatre will include programs and workshops that combine storytelling and theatre making with wellness practices and community connections. Participants in the next cohort of the Green Room Collective leadership program will contribute in meaningful ways on projects throughout the season while strengthening their individual skills. The year ahead will also feature a unique play reading series that explores different models for production. 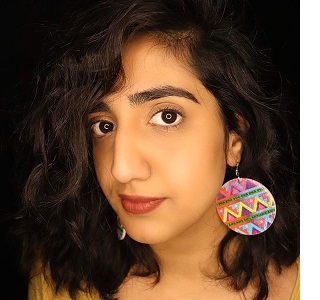 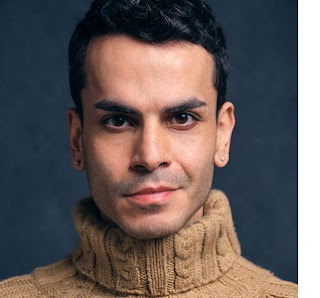 Omer Abbas Salem is a Chicago actor and playwright. As an actor, he's worked with Goodman Theatre, Steppenwolf Theatre, The New Coordinates, Jackalope Theatre, Steep Theatre, Silk Road Rising, Griffin Theatre, The House, Bailiwick Chicago, Actors Theatre of Louisville, St. Louis Rep, Roundabout Theater, and The Atlantic Theater. As a playwright, his work has been developed and produced at Steppenwolf Theatre, Goodman Theatre, Jackalope Theatre, First Floor Theater, DePaul University, National Queer Theater, Definition Theatre, About Face Theater, and The New Coordinates. He is the winner of Steppenwolf's SCOUT Development Project (20/21), Definition Theatre's Amplify Commission (20/21), Goodman Theatre's Future Labs Development (21), The Cunningham Commission at DePaul Theatre School (21/22), Goodman Theatre's Playwrights Unit (21/22) and First Floor Theater's Blueprint Commission (21/22). He was an apprentice of the Actors Theatre of Louisville (17/18) and is also a proud ensemble member with Jackalope Theatre, Steep Theatre, First Floor Theater, and The New Coordinates. He is a graduate of the University of Illinois Urbana Champaign and the University of Chicago. During the day, he's a Client Strategist in new-tech. Abbas is represented by DDO Artist Agency and The Gersh Agency. More at omerabbassalem.com. 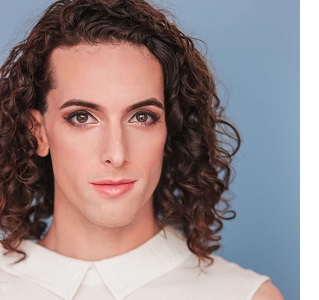 Will Wilhelm (they/them): Gender Play, or what you Will co-creator

Will Wilhelm is a Chicago-based actor, writer, and educator. They were most recently seen as Angel in RENT (Portland Center Stage). Select Chicago credits include MR. BURNS (Theater Wit), STRAIGHT WHITE MEN (Steppenwolf Theatre), NOTEBOOKS OF LEONARDO DA VINCI (Goodman Theatre), and MY WONDERFUL BIRTHDAY SUIT (Chicago Children’s Theatre). Other regional credits include OKLAHOMA!, AS YOU LIKE IT, and MACBETH (Oregon Shakespeare Festival), where they were the first non-binary company member in the festival’s history. With Erin Murray, they are also the co-creator of the video podcast series TEACAKES & TAROT, produced by Island Shakespeare Festival and HowlRound Theatre Commons. In 2020, Will wrote “Gender is Performance” for HowlRound and was featured in the Chicago Tribune. A proud Northwestern graduate, Will is represented by Gray Talent Group. WillWilhelm.com 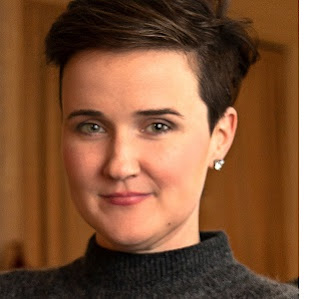 Erin Murray (she/her): Gender Play, or what you Will co-creator

Erin has directed both nationally and internationally in her twenty-year directing career. In 2005, Erin directed the Irish premiere of HEDWIG AND THE ANGRY INCH (Best Production at the Speigeltent) which was remounted at Project Arts Centre in 2006. Erin was Staff Director for Ireland's Opera Theatre Company for three seasons and toured six fully staged English translation productions internationally. Favorite directing credits include Anne Washburn’s THE INTERNATIONALIST (Steppenwolf Garage), the Chicago premiere of Suzanne Heathcote’s I SAW MY NEIGHBOR ON THE TRAIN AND I DIDN’T EVEN SMILE (Redtwist), and the Seattle premiere of Annie Baker’s JOHN (ArtsWest). She was the Executive Producer on the sold-out 2012 world premiere of Ariel Zetina's PINK MILK: A MAGIC TRAGEDY BASED ON THE LIFE OF ALAN TURING at New York International Fringe and Chicago Fringe Festival. Erin has also adapted and created new work for audiences of all ages. She celebrated the world premiere of her adaptation, CYRANO DE BERGERAC: A QUEEROIC COMEDY WITH MANY ACTS, with Island Shakespeare Festival in July 2022; her adaptation of Henrik Ibsen's GHOSTS premiered in Chicago in 2018. Erin worked with Seattle artivist Ana Maria Campoy to adapt and direct Seattle Shakespeare Company's first bilingual school WA state tours TAMING OF THE SHREW/ LA FIERECILLA DOMADA (2017) and TWELFTH NIGHT/DUODÉCIMA NOCHE (2018). Additional collaborations with Will Wilhelm include the video podcast series TEACAKES & TAROT: CONVERSATIONS WITH QUEER FUTURISTS produced by Island Shakespeare Festival in 2020 and later in association with HowlRound Theatre Commons. Guests include Robert O'Hara, Bill Rauch, P Carl, and Lisa Wolpe with episodes available wherever you enjoy your podcasts.  Education: MFA Theatre Directing, Northwestern University; BA, Trinity College Dublin. ErinMurrayDirects.com.