"This film is joyous, but more
than that: it's lovely in its construction"
-Roger Ebert

"Patang" is playing at Facets @ 7pm and 9pm through Thursday the 30th. Jerome McDonnell interviewed Milos and the director on WBEZ, and the director is going to speak after ALL the 7pm shows for the whole run.

"[Bhargava] allows us to discover these people in mostly glancing, sidelong moments, as if he were capturing their lives on the sly. It's rare for a filmmaker to integrate with such seamlessness the staged and the 'caught.'"
-Christian Science Monitor

"This film is joyous, but more than that: it's lovely in its construction"
-Roger Ebert

"A feast for the eyes"
-TimeOut Chicago

Set against the dynamic and colorful spectacle of India's largest kite festival, the Uttarayan, Prashant Bhargava's debut feature tells the story of Jayesh, a Delhi-based businessman who returns to his Gujarat roots with his young daughter Priya. Ostensibly going home to Ahmedabad to relive his childhood memories and introduce his daughter to the tradition of kite-flying, Jayesh has some unexpected news for the family's future. He plans include selling off the family home, moving his relatives into a modern condo, while also trying to avoid unresolved issues from his past which leads to unexpected consequences.

Patang, directed by Chicago-born-and-raised Bhargava, who started his career as a graffiti artist, is a family drama which avoids Bollywood clichés as well as using a dynamic combination of actors and non-professionals to showcase a complex narrative about contemporary India. Using the kites as a metaphor for the way the past controls his characters no matter how high they fly, Patang captures the jubilant and striking visuals of the festival that accentuates his background as a graphic artist, while laying out a multi-character story of discovery and hope.

Directed by Prashant Bhargava, India, 2010, 95 mins. In Hindi and English with English subtitles.

Filmmaker Prashant Bhargava, who is a Chicago native will be here in person for a Q&A after select screenings.
Official site     Director interview     New York Times     Los Angeles Times 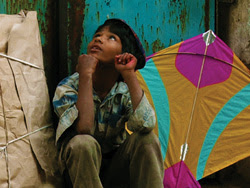