ACT OUT: CHI, IL LIVE THEATRE ON OUR RADAR 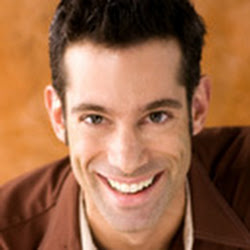 Blast from the past:
I just got an e-mail update from Andy Eninger,  a friend I've known for over 20 years and used to do improv with, waaay back in the day at Miami University.   I have fond memories of letters he sent from his grad work in Budapest, Hungary.   They were these crazy-creative stream of consciousness missives with negatives from the cutting room floor taped on and sent half way around the world (I think they're still in my basement!).   He did a riff once on my addy labels that had L as my middle initial, and he filled an envelope musing on "What does the L stand for...."


He's now a fabulous fixture at Second City, Annoyance and all over the Chicago scene.   He is currently the head of the Second City Training Center's Writing Program where he gets to warp the minds of young actors.  His rampant creativity has escalated from the back of envelopes to the classroom, and to the main stage, for all to enjoy!   These are his current and upcoming shows.   Check 'em out.

Andy says:
I have a show running now, and two coming up that I'm very proud of.  One is all girls; one is all boys; one is a mix. 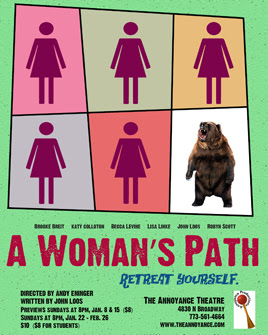 A WOMEN'S PATH
A parody of Women's Retreats featuring the funniest women in Chicago.
Thursdays 8pm through May 31stAnnoyance Theatre, 4830 N. Broadway

STEAMWERKZ! THE MUSICAL
Fall into the rabbit hole and go inside Chicago's infamous gay bathhouse "Steamworks" as only the Annoyance can imagine it: As a discosexual Alice in Wonderland.  (I play the Cheshire cat/older gay dude - a part I will have to do a lot of research for, since I'm only 29.)--Yeah, me too! :)

Read the blog about the show process - http://revueprocess.tumblr.com/
Directed by Angie McMahon
Posted by Bonnie Kenaz-Mara at 10:19 AM No comments: