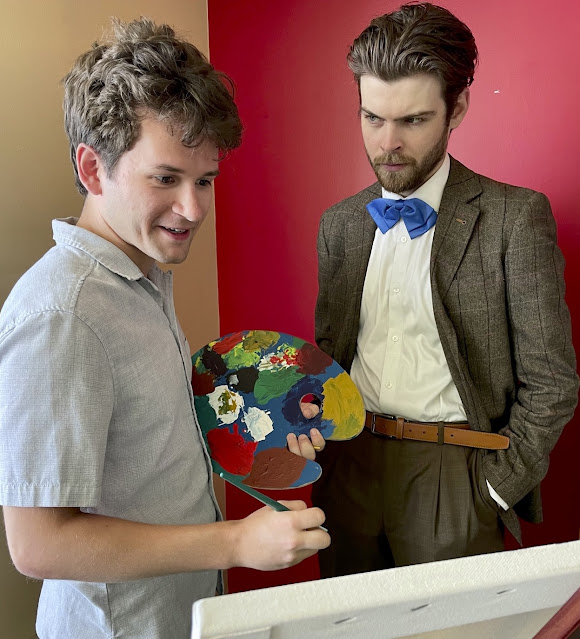 Directed by Georgette Verdin, this New Comedy is Inspired by the Real Story of Famed Artist Marc Chagall

Grippo Stage Company is proud to present Chagall In School, a world premiere comedy by James Sherman (Beau Jest, The God of Isaac, The Ben Hecht Show) and directed by Georgette Verdin.  The play is inspired by the real story of the famed artist, Marc Chagall. Performances will take place August 26 - October 8, at Theater Wit, 1229 W. Belmont Ave. Preview performances will be Friday, Aug. 26 at 8 p.m. Saturday, Aug. 27 at 8 p.m. Sunday, Aug. 29 at 2 p.m.,Thursday, Sept. 1, Friday, Sept. 2 and Saturday, Sept. 3 at 8 p.m. and Sunday, Sept. 4 at 2 p.m. I'll be catching opening night, Sept. 6th, so check back soon after for my full review. The performance  schedule is Thursdays -  Saturdays at 8 p.m. and Sundays at 2 p.m. Tickets are now on sale  from $38 - $42 and information is available at 773.975.8150 or at www.theatrewit.org.

It’s 1920, a few years after the Bolshevik Revolution in Russia and Marc Chagall is asked to head a school for artists in his Russian hometown of Vitebsk. By gathering together other noted artists of the time including Yuri Pen, Vera Ermolaeva and El Lissitsky and with the support of his loving wife, Berta, Chagall endeavors to realize his dream of a free school for anyone who wishes to explore their artistic aspirations. His goals are quickly complicated by the clash of personalities and differences between these artists, as well as Chagall’s own inherent inability to take on the role of a stern administrator. When the most impressive artist of the time, Kazimir Malevich, arrives to join the faculty, the artistic soul of the school and Chagall’s own future as an artist are contested.

Verdin has also worked with Lookingglass Theatre, Facility Theatre and Chicago Dramatists, among others. She holds a Bachelor of Arts in Theatre Performance from McNeese State University in Lake Charles, LA and a Master in Directing from the Chicago College of Performing Arts at Roosevelt University. She is a 2021 recipient of a 3Arts Make-A-Wave grant and an associate member of Stage Directors and Choreographers Society. For more, visit georgetteverdin.com.

James Sherman is a Chicago playwright, whose works include Magic Time, The God of Issac, Mr. 80%, The Escape Artist, Beau Jest, This Old Man Came Rolling Home, Jest a Second!, Romance in D, From Door to Door, The Old Man’s Friend, Affluenza!, Half and Half, Relatively Close, Jacob and Jack and The Ben Hecht Show. Sherman began his professional career as a writer and performer with The Second City in the early 1970s. He received an M.F.A. degree from Brandeis University and a Masters Degree in Library and Information Science from Dominican University.  In 1985, he began his long association with the Tony Award-winning Victory Gardens Theater in Chicago and was a founding member of the Victory Gardens Playwrights Ensemble. Sherman currently teaches playwriting and improvisation at Columbia College Chicago and DePaul University.  He has been a teacher of playwriting and acting on the faculties of The Second City Training Center, Chicago Dramatists Workshop, Victory Gardens Theater and as a visiting professor (2001) in Seoul, South Korea at the Korean National University of the Arts. His published works have been seen in the United States, Canada, Mexico, South America, England, Germany, Austria, Turkey, South Africa, Australia, China and Korea.

Grippo Stage Company, a 501 (c) (3) public charity, produces new plays and revivals of classic works of theater in the Chicago metropolitan area. Previous productions include The Ben Hecht Show (world premiere) written and performed by James Sherman; Confessions of a P.I.M. P. (co-production with Dennis Zacek), written and performed by Tony Award-winning actor Andre De Shields and The God of Issac (Chicago revival) by James Sherman. Grippo Stage currently partners with pianist/actor/author Hershey Felder to present streaming shows from Florence, Italy.  Upcoming for May of 2023 is Shaw vs. Tunney (world premiere) by Douglas Post, based on The Prizefighter and the Playwright by Jay R. Tunney, which depicts the deep relationship between Irish playwright George Bernard Shaw and Gene Tunney, the American World Heavyweight boxing champion.

Posted by Bonnie Kenaz-Mara at 6:36 PM No comments: