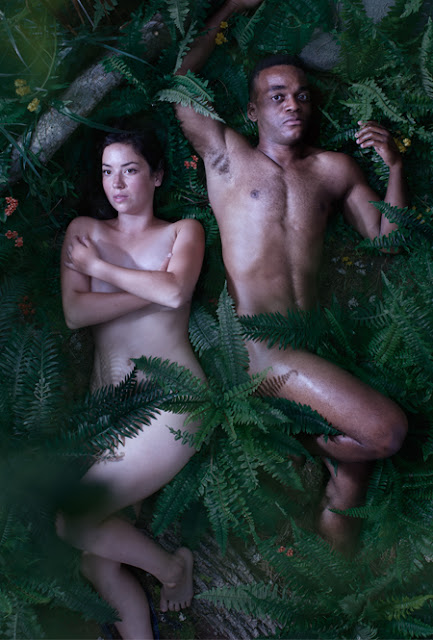 Writers Theatre, under the leadership of Artistic Director Michael Halberstam and Executive Director Kathryn M. Lipuma, continues its 2016/17 season with The Mystery of Love & Sex written by Bathsheba Doran and directed by Marti Lyons. The production runs April 5 – July 9, 2017 in The Gillian Theatre, 325 Tudor Court, Glencoe.

Charlotte and Jonny have grown up together, and are now trying to determine whether their close friendship might be something more. When they discover exactly what “more” actually entails, however, it comes as a surprise to them both—and to Charlotte’s parents, who are holding secrets and resentments of their own. This compelling, spirited story of intricate relationships is an entertaining and explosive look at race, sexual identity and family dynamics.

Marti Lyons, one of Chicago’s finest emerging directors, brings her unique vision to this deeply insightful and very funny new play, using the intimacy of WT’s Gillian Theatre to bring audiences face-to-face with the challenges of loving someone completely while trying to determine exactly what that means.

“I have had the pleasure of following the impressive rising careers of playwright Bash Doran and Director Marti Lyons for the past few years and I am delighted to find a project that suited both their considerable talents so perfectly,” said Artistic Director Michael Halberstam.  “The Mystery of Love & Sex enjoyed a very successful and critically-acclaimed run at Lincoln Center Theatre’s Mitzi Newhouse Theatre and is now receiving a number of productions nationwide and with good reason. Doran manages to create a world in which themes of sexuality, gender, friendship, race, and privilege all feature prominently. She does so with enormous wit and joy and I think our audiences will very much appreciate and ultimately be very moved by the journey of her deliciously crafted characters and expertly articulated text.  Marti has brought together a superbly gifted and engaging cast and a top-notch design team taking full advantage of the intimacy of the Gillian Theatre and Writers Theatre’s hallmark intimacy.”

Bathsheba Doran’s (Playwright) The Mystery of Love & Sex received its world premiere at Lincoln Center in 2015 under the direction of Sam Gold, starring Diane Lane and Tony Shalhoub. Her critically acclaimed play Kin received its world premiere in spring 2011 at Playwrights Horizons, directed by Sam Gold. Her play Parents' Evening premiered at The Flea Theater, directed by Jim Simpson, and her play Ben and the Magic Paintbrush premiered in spring 2010 at South Coast Repertory Theater. She is a 2009 recipient of the Helen Merrill Playwriting Award and three Lecomte du Nouy Lincoln Center playwriting awards. She is also a Cherry Lane Mentor Project Fellow and a Susan Smith Blackburn Award finalist. Bash is currently developing the limited series Codes of Conduct with Steve McQueen for HBO. She also served as a writer/producer for the second season of Showtime’s hit series Masters of Sex, and she was recently a story editor on Smash for NBC. Bash wrote on season two of the acclaimed Martin Scorsese/HBO series Boardwalk Empire (for which her episode received a WGA nomination). Bash Doran is also developing a series for Channel 4 called Jerusalem. Bash’s first play Feminine Wash was produced at the Edinburgh Fringe festival while she was a student at University of Cambridge, from which she holds a B.A. and an M.A. She then went on to University of Oxford, where she received an M.A. before working as a television comedy writer with the BBC. Bash moved to the United States on a Fulbright Scholarship in 2000, received her M.F.A. from Columbia University and went on to become a playwriting fellow of The Juilliard School. She is currently under commission from Lincoln Center Theater, Atlantic Theater and Playwrights Horizons in New York City. Her work is available from Samuel French and Playscripts Inc.

Marti Lyons (Director) returns to Writers Theatre, where she previously assistant directed Days Like Today and The Letters. Lyons is also an ensemble member at The Gift Theatre Company and received the 2015 Maggio directing fellowship from Goodman Theatre. Chicago credits include Title and Deed (Lookingglass Theatre Company), The City of Conversation (Northlight Theatre), Short Shakespeare! Romeo and Juliet (Chicago Shakespeare Theater), Wit (The Hypocrites), Mine, Bethany and Body and Blood (The Gift Theatre Company), Hot Georgia Sunday, Seminar (Haven Theatre), Give it All Back, Mai Dang Lao, 9 Circles, Maria/Stuart, co-director for The Golden Dragon (Sideshow Theatre Company), Prowess, The Peacock, The Last Duck (Jackalope Theatre Company) and The Play About my Dad (Raven Theatre). Regional credits include Wondrous Strange (Humana Festival at Actors Theatre of Louisville). Next up Marti will direct Native Gardens for Victory Gardens Theater.

Jerry Miller (Howard’s Father) makes his Writers Theatre debut. Jerry is a Chicago actor, director, producer and playwright. His favorite roles include Otto Frank and Mr. Van Daan in The Diary of Anne Frank and Scrooge in A Christmas Carol (Metropolis Performing Arts Center), Ben in The Secret Garden, Mr. Lunde in Brigadoon and the Rabbi in Fiddler on the Roof (Light Opera Works). In August 2017 Jerry will be appearing as Pops in the musical Gypsy (Music Theater Works, formerly known as Light Opera Works). Jerry has also worked for Redtwist Theater, Milwaukee Repertory Theater, Walkabout Theater, and Windy City Playhouse.  Jerry is a member of Screen Actors Guild. He holds a Masters in Fine Arts in Acting from the University of South Carolina.

Sunday Spotlight—Sunday, May 21, 2017
This one-hour event will follow the matinee performance and feature an expert in a field related to the themes or setting of The Mystery of Love & Sex, moderated by a member of the WT Artistic Team. Seating is limited. RSVP is required.

The Making of… Series—Monday, June 5, 2017 at 6:30pm
Writers Theatre will once again host its popular The Making of… Series, providing insight into a different aspect of creating the productions seen on our stages. Enjoy a short and lively presentation by our actors, designers or other experts who will walk you through the process of preparing for and executing a production. The Making of… events are FREE and open to the public. Seating is limited. RSVP is required.

Post Show Conversation: The Word
Join us after Tuesday evening performances (excluding previews and extensions) for a 15-minute discussion of the play, facilitated by a member of the WT Artistic Team.

RIDE METRA TO WRITERS THEATRE
In an effort to promote taking public transit to the Theatre, Writers Theatre launched a new promotion in 2013. Any audience member who purchases a ticket to a Writers Theatre production and rides Metra’s Union Pacific North Line to the Theatre may snap a photo of themselves on the train and post it to their Facebook page or Twitter feed with a tag of @WritersTheatre and #TheMysteryofLoveandSex, and upon showing the post at the Writers Theatre Box Office, receive $5 in cash to put toward the cost of your fare as a thank you for going green.