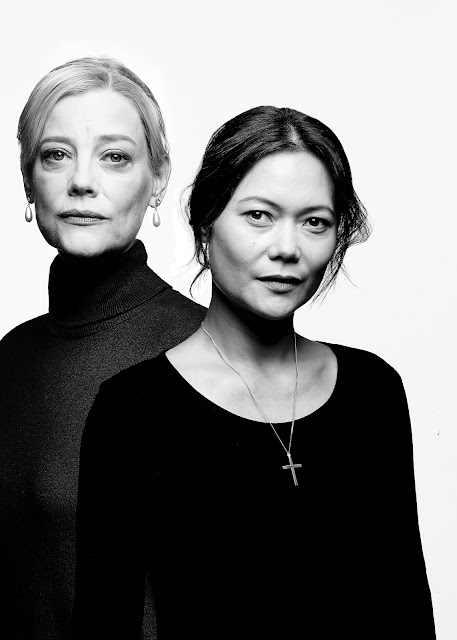 I'll be out for the press opening March 1st, so check back soon for my full review. We're eager to catch this royal clash between fierce cousins, Mary, Queen of Scots, and her cousin Elizabeth I, Queen of England. Chicago Shakespeare Theater (CST) is renowned for world class productions with brilliant casting, gorgeous costumes, and stunning set design. The two fiercely independent women at the center of the showdown are portrayed by acclaimed actresses K.K. Moggie as Mary and Kellie Overbey as Elizabeth. Don't miss this!

Mary Stuart is presented in Chicago Shakespeare’s Courtyard Theater, February 21–April 15, 2018. Single tickets are on sale now for $48–$88 (subject to change). Special discounts are available for groups of 10 or more, as well as CST for $20 tickets for patrons under 35. For more information or to purchase tickets, contact Chicago Shakespeare Theater’s Box Office at 312.595.5600 or visit the Theater’s website at www.chicagoshakes.com.

CST strives to make its facility and performances accessible to all patrons through its Access Shakespeare programs.
Accessible performances for Mary Stuart include:
•Open-captioning – Thursday, March 29 at 1:00 p.m. and 7:30 p.m.
•ASL Duo-interpretation – Friday, April 6 at 7:30 p.m.
•Audio-description – Sunday, March 18 at 2:00 p.m. (with optional touch tour at 12:00 p.m.)

Two extraordinary women clash in a no-holds-barred power play over the right to rule. Queen Elizabeth I must decide the fate of her imprisoned cousin, Mary, Queen of Scots, who is accused of treason. In a single, clandestine meeting where both women’s ambitions are laid bare, the fate of two countries is decided. Seduction, greed, and deception make for a thrilling war of words between the formidable queens—each surrounded by a cadre of men, jockeying for power and influence.

Peter Oswald’s new high-stakes telling of Friedrich Schiller’s nineteenth century drama premiered at the Donmar Warehouse under the direction of the legendary Phyllida Lloyd. Following rave reviews, the production swiftly transferred to the West End and to Broadway for extended runs, garnering multiple Olivier and Tony Award nominations. Variety praises, "This is no stodgy history lesson but a juicy regal smackdown rendered in direct, muscular language." The New York Times said Oswald’s play has "a fierce timelessness in its depiction of political power games."

Bringing the inimitable women to life onstage are K.K. Moggie as Mary Stuart and Kellie Overbey as Queen Elizabeth I. Moggie’s extensive off-Broadway theater credits include performances at MCC Theater, Classic Stage Company, and Atlantic Theater Company. Overbey made her Broadway debut in the Steppenwolf transfer production of Sam Shepard’s Buried Child, directed by Gary Sinise. She has since appeared on Broadway in The Coast of Utopia (Parts 1, 2 and 3), Twentieth Century, QED, and Judgment at Nuremberg.

Full cast and creative team is announced below. For more information, visit www.chicagoshakes.com/mary.


ABOUT CHICAGO SHAKESPEARE THEATER
A global theatrical force, Chicago Shakespeare Theater (CST) is known for vibrant productions that reflect Shakespeare’s genius for storytelling, musicality of language, and empathy for the human condition. Under the leadership of Artistic Director Barbara Gaines and Executive Director Criss Henderson, Chicago Shakespeare has redefined what a great American Shakespeare theater can be, putting forward a company that delights in the unexpected and defies theatrical category. A Regional Tony Award-winning theater, CST produces acclaimed plays at its home on Navy Pier, throughout Chicago’s schools and neighborhoods, and on stages around the world. In 2017, the Theater unveiled a new stage, The Yard at Chicago Shakespeare. Together with the Jentes Family Courtyard Theater and the Thoma Theater Upstairs at Chicago Shakespeare, The Yard positions CST as the city’s most versatile performing arts venue.