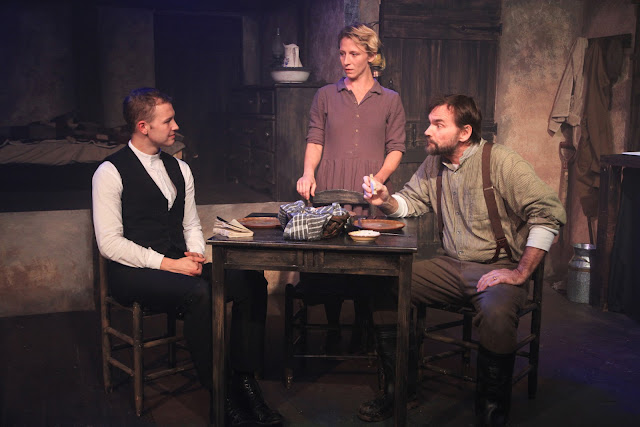 Interrobang Theatre Project launches its 2017-18 Season, exploring the urgent question “What is Truth?,” with the Midwest premiere of Dawn King's darkly comic and politically relevant British drama FOXFINDER, directed by Literary Manager Margaret Knapp. FOXFINDER will play September 28 – November 5, 2017 at The Athenaeum Theatre (Studio 2), 2936 N. Southport Ave. in Chicago. Tickets are currently available at www.interrobangtheatre.org, by calling (773) 935-6875 or in person at The Athenaeum Theatre Box Office.

In the not so distant future, the economy is failing, food is scarce and paranoia is in the air. Samuel and Judith Covey live in rural England, maintaining their government-controlled farm – in constant fear of losing it all. After an anonymous tip, William Bloor, a "Foxfinder," arrives to investigate a suspected contamination, threatening to uncover secrets of desire and regret that will change all of their lives forever.

Comments Director Margaret Knapp, "Although it flirts with thematic elements like the examination of a police state in today's society, the effects of global warming, and religious zealotism, at it's core Foxfinder is about the battle against the forces of nature, both external and internal, and how when these forces threaten to overwhelm us, we look for someone, or something, to blame." 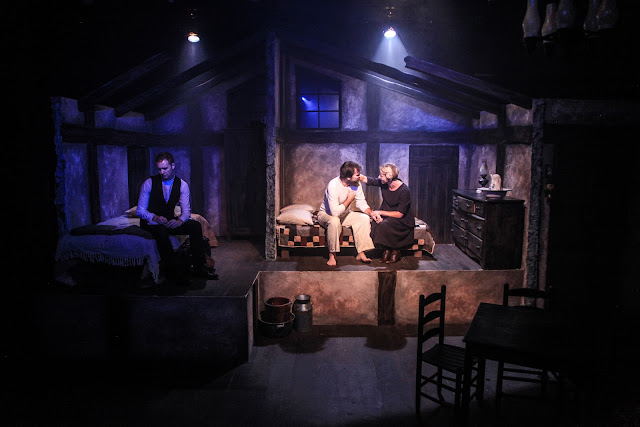 
Tickets are currently available at www.interrobangtheatre.org, by calling (773) 935-6875 or in person at The Athenaeum Theatre Box Office.

Dawn King (Playwright) is an award-winning writer working in theatre, film, TV and radio. Currently, Dawn is working on two plays; The Light and Salt, which is a commission from the National Theatre and will be performed by youth theatre groups around the country in 2018. She is also adapting her stage play Ciphers into a screenplay for Cowboy Films. Ciphers made the Brit List of the best ‘yet to shoot’ screenplays as selected by the UK film industry in 2016. Dawn is also redrafting the blacklisted screenplay Randle is Benign for Echo Lake Productions in the U.S. Dawn’s previous work for the stage includes; an adaptation of Aldous Huxley’s novel Brave New World, a co-production between the Royal and Derngate, Northampton and the Touring Consortium which toured the UK in 2014; Ciphers, a co-production between Out of Joint, Exeter Nothcott and The Bush Theatre which toured the UK in 2013/2014; and Foxfinder, produced by Papatango Theatre Company at The Finborough in 2011. Foxfinder won the Royal National Theatre Foundation Playwright Award 2013, the Papatango New Writing Competition 2011 and Most Promising Playwright, Off West End awards 2012. Dawn’s short film The Kármán Line won 17 awards including the BIFA for Best Short and was BAFTA nominated in 2014.

Margaret Knapp (Director) is new to the Interrobang Theatre Project family and is happy to be working as the Literary Manager for the company, as well as directing her first ITP production. A proud Equity actor since 1992, Margaret has acted at various theaters in the Midwest such as the Apollo here in Chicago, Drury Lane-Oakbrook, The Unicorn Theater and Kansas City Rep in Kansas City, MO and The Human Race Theater in Dayton, OH. Her directing credits include: Uncle Vanya, Honey Brown Eyes, The Intelligent Design of Jenny Chow, Rhinoceros, Museum by Tina Howe and The Eight: Reindeer Monologues starring TV and film actor Richard Kind. A graduate of UW-Madison (BA in Communications) and UMKC (MFA in Acting/Directing), Margaret also teaches Speech, Acting and Comparative Literature at various colleges in Illinois. 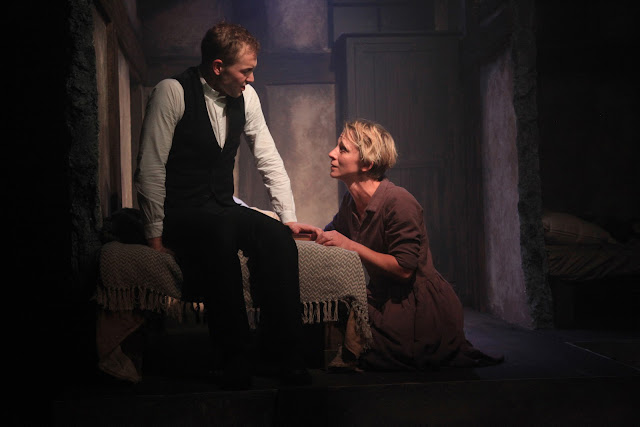 Now in its eighth season, Interrobang Theatre Project, under the artistic leadership of Georgette Verdin and James Yost, has been hailed by the Chicago Tribune as a “company to watch” and by Time Out Chicago as “one of Chicago’s most promising young theatre companies.” Season seven earned seven non-Equity Jeff Nominations, including Best Director, Production of a Play, Solo Performance and acting nominations for Lead Actor, Actress and Actor in a Supporting Role. Productions have included the world premiere of Calamity West’s Ibsen is Dead (Jeff Recommended), and the Jeff Recommended The Pitchfork Disney, Orange Flower Water, Recent Tragic Events, The Amish Project, The North Pool, and Falling. Director James Yost’s critically-acclaimed Really Really was one of six shows chosen for Chicago Tribune’s list "Best of 2015 in Chicago Fringe Theater.”

For more information, please visit www.interrobangtheatreproject.org.
Posted by Bonnie Kenaz-Mara at 9:10 AM No comments: