OPENING: World Premiere of The Doppelgänger (an international farce) at Steppenwolf April 5 – May 27, 2018

Rehearsals Have Begun for Steppenwolf’s World Premiere of
The Doppelgänger (an international farce)
By Matthew-Lee Erlbach
Directed by Ensemble Member Tina Landau
April 5 – May 27, 2018 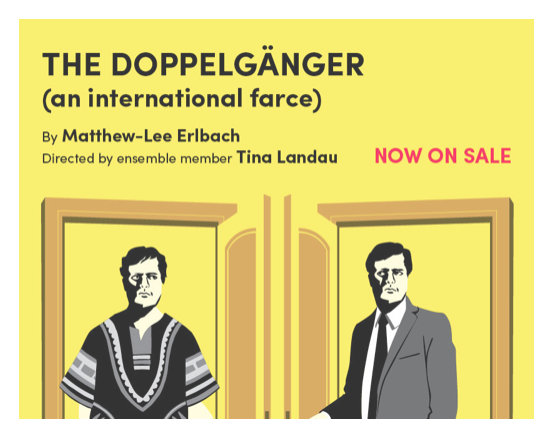 A Side-Splitting Farce about First-World Greed and Backroom Deals

In the dangerous back channels of international resource politics, a wealthy British businessman suffers an untimely accident just before a critical African copper deal is signed. So when his unwitting (and witless) American doppelgänger is thrust into negotiations to avert intercontinental disaster, chaos erupts, leaving us wondering: whose side are we supposed to be on...and who will save Africa?? The Doppelgänger (an international farce) is a hilarious, irreverent and timely look at the back-room deals that shape our world and the unlikely cast of characters who make them.

Rainn Wilson is an Emmy nominated and SAG award-winning actor with Chicagoland roots (he graduated from New Trier High School in Winnetka, Ill.) who has found himself in a variety of comedic and theatrical roles throughout his career. His first breakthrough role came when he played assistant mortician “Arthur Martin” in HBO’s Six Feet Under, winning him and the cast a Screen Actors Guild Award for “Outstanding Performance by an Ensemble in a Drama Series.” Wilson is best known for playing the inimitable “Dwight Schrute” for nine seasons on NBC’s Emmy award-winning comedy The Office. Among Wilson’s film credits are the Netflix feature Shimmer Lake; Hesher, opposite Natalie Portman and Joseph Gordon-Levett; Super, with Kevin Bacon, Liv Tyler, and Ellen Page; and the acclaimed comedies Juno and Almost Famous, among others. Next up, Wilson co-stars in Warner Bros adventure feature The Meg opposite Jason Statham. Wilson has an MFA from NYU’s Graduate Acting Program at the Tisch School of the Arts, and spent 10 years doing theatre in New York before moving to Los Angeles. He was on Broadway in The Tempest with Patrick Stewart, and the Tony nominated London Assurance. Wilson worked off-Broadway at The Public Theater and Playwrights Horizons, and performed regularly at The Arena Stage, The Guthrie, and with the touring repertory theater The Acting Company. The comedy show he created, The New Bozena, had a successful Off-Broadway run at The Cherry Lane, and later played in Los Angeles at The Hudson Guild and The Tiffany. Most recently, Wilson performed the critically acclaimed one-person monologue Thom Pain (Based on Nothing) at The Geffen. He founded the YouTube channel Soul Pancake, which has 2.5 million subscribers. In 2015 he published his memoir, The Bassoon King: My Life in Art, Faith, and Idiocy.

Newly announced ensemble member Celeste M. Cooper (Rosie Guerekoyame) joins the cast after her acclaimed performance as “Imani” in Aziza Barnes’s BLKS this past December. The cast also features ensemble member Audrey Francis (Beatrix Geddes-Renwick) is currently on stage in You Got Older (through March 11); ensemble member Ora Jones (Lolade Másarágba) was most recently in Steppenwolf’s The Wheel and Three Sisters, and in last season’s Broadway revival of Les Liasons Dangereuses; ensemble member Sandra Marquez (Theresa Irdley) most recently in Mary Page Marlowe at Steppenwolf and directed Teatro Vista’s production of FADE at Victory Gardens; and ensemble member James Vincent Meredith (Michel Másarágba) most recently performed in Steppenwolf’s The Minutes. Michael Accardo (General Stanley Harcourt) was recently seen onstage in Drury Lane Theatre’s production of Chicago and onscreen in Shameless and Chicago P.D.; Whit K. Lee (Wen Xiaoping) was in Off-Broadway productions of Attack of the Evis Impersonators and Junie B. Jones’ Essential Guide to School and the Netflix series Orange is the New Black; Andy Nagraj (Prince Amir Abdullah) recently played Ed Knight/Isaac Jaggard in the Denver Center for the Performing Arts production of The Book of Will and was recently in Court Theatre’s production of Harvey as Duane Wilson; Dan Plehal (Body) Karen Rodriguez (Marina) was most recently seen on Steppenwolf’s stage in The Rembrandt and in the critically acclaimed one woman show The Way She Spoke at Greenhouse Theater Center.

About the Playwright
Matthew-Lee Erlbach is an actor/playwright from Chicago and NYC whose plays include his critically acclaimed solo play, Handbook for an American Revolutionary (Gym at Judson) and Eager to Lose, a Burlesque Farce in Rhyming Verse (Ars Nova). Other plays include Kevin Lamb, King George III, Revelations, A Neighbor in the Area, and Electronic Persons, which have been developed with The New Group, Vineyard, Ars Nova, MCC, Williamstown, NYTW, SPACE on Ryder Farm and the Orchard Project, among others. A recipient of the 2016 Humanitas Prize New Voices Award, Puffin Foundation Grant, and member of Ars Nova’s 2014/15 Play Group, he has written for Showtime's Masters of Sex as well as for Nickelodeon, MTV, WWE, and The Huffington Post. He is a graduate of the public school system from K-College, a team leader for Habitat for Humanity Global Villages program, and runs a writing program for The Midnight Mission.

About the Director
Tina Landau is a writer, director, and teacher whose work includes directing/conceiving SpongeBob Squarepants: The Broadway Musical (currently on Broadway), Tarell McCraney’s Head of Passes (Steppenwolf, The Public and the Mark Taper Forum), WIG OUT! (Vineyard Theatre), and In the Red and Brown Water (The Public), Bill Irwin/David Shiner’s Old Hats and Chuck Mee’s Big Love and Iphigenia 2.0 (all Signature Theatre), Paula Vogel’s A Civil War Christmas (New York Theatre Workshop), and her musical Floyd Collins (also bookwriter/additional lyrics, Playwrights Horizons.) On Broadway, Landau has also directed Tracy Letts’s Superior Donuts and the revival of Bells Are Ringing. At Steppenwolf, where she is an ensemble member, directing credits include The Wheel, Hot L Baltimore, The Brother/Sister Plays, The Tempest, The Time of Your Life (also Seattle Rep, ACT), The Diary of Anne Frank, The Cherry Orchard, The Ballad of Little Jo, Berlin Circle, and her own play Space (also Mark Taper Forum, the Public.) Landau has co-authored The Viewpoints Book with Anne Bogart and has taught regularly at such schools as Yale, Columbia, Harvard, and Northwestern. Upcoming projects include a follow-up book with Bogart, Viewpoints on Viewpoints, and the premiere of the new musical Dave this spring at Arena Stage.

Tickets & Membership Info
Single tickets ($20-$109) are available through Audience Services (1650 N Halsted St), 312-335-1650, steppenwolf.org. Black Card Memberships are still available for the remainder of the 17/18 season. They are designed for audiences interested in extreme flexibility with six tickets for use any time for any production. Perks include easy and free exchanges, access to seats before the general public, savings on single ticket prices and bar and restaurant discounts for pre- and post-show socializing. Red Card memberships are available for theatergoers under 30.  To purchase a Flex Card Membership, visit Audience Services at 1650 N Halsted St, call 312-335-1650 or visit steppenwolf.org/memberships.

Remaining 2017/18 Season
Currently playing is the Chicago premiere of You Got Older by Clare Barron, directed by Jonathan Berry (January 25 – March 11) and Steppenwolf for Young Adults’ production of The Burn by Philip Dawkins, directed by Devon de Mayo (last performance March 10). Following The Doppelgänger (an international farce) is Guards at the Taj by Rajiv Joseph, a story about the search for beauty in desperate circumstances (May 31 – June 22, 2018) directed by ensemble member Amy Morton who returns to direct the cast from the acclaimed Off-Broadway production; and The Roommate, by Jen Silverman, directed by Tony Award winner Phylicia Rashad (The Cosby Show, A Raisin In The Sun, Tracy Letts’s August: Osage County). In The Roommate, a comically mismatched pair of roommates leads to a surprising and touching friendship (June 21 – August 5, 2018).

Visitor Information
Steppenwolf is located at 1650 N Halsted St near all forms of public transportation, bike racks and Divvy bike stands. The parking facility ($12 or $14, cash or card) is located just south of our theater at 1624 N Halsted. Valet parking service ($14 cash) is available directly in front of the main entrance at 1650 N Halsted St starting at 5pm on weeknights, 1pm on weekends and at 12 noon before Wednesday matinees. Limited street and lot parking are also available. For last minute questions and concerns, patrons can call the Steppenwolf Parking Hotline at 312.335.1774.

The Doppelgänger is sponsored by the National Endowment for the Arts, as well as United Airlines and PwC. United Airlines is the Exclusive Airline of Steppenwolf and ComEd is the Official Lighting Sponsor for the 17/18 season.

Steppenwolf Theatre Company is the nation’s premier ensemble theater. Formed by a collective of actors in 1976, the ensemble represents a remarkable cross-section of actors, directors and playwrights. Thrilling and powerful productions from Balm in Gilead to August: Osage County—and accolades that include the National Medal of Arts and 12 Tony Awards—have made the theater legendary. Steppenwolf produces hundreds of performances and events annually in its three spaces: the 515-seat Downstairs Theatre, the 299-seat Upstairs Theatre and the 80-seat 1700 Theatre. Artistic programming includes a seven-play season; a two-play Steppenwolf for Young Adults season; Visiting Company engagements; and LookOut, a multi-genre performances series. Education initiatives include the nationally recognized work of Steppenwolf for Young Adults, which engages 15,000 participants annually from Chicago’s diverse communities; the esteemed School at Steppenwolf; and Professional Leadership Programs for arts administration training. While firmly grounded in the Chicago community, nearly 40 original Steppenwolf productions have enjoyed success both nationally and internationally, including Broadway, Off-Broadway, London, Sydney, Galway and Dublin. Anna D. Shapiro is the Artistic Director and David Schmitz is the Executive Director. Eric Lefkofsky is Chair of Steppenwolf’s Board of Trustees. For additional information, visit steppenwolf.org, facebook.com/steppenwolftheatre, twitter.com/steppenwolfthtr and instagram.com/steppenwolfthtr.
Posted by Bonnie Kenaz-Mara at 4:54 PM No comments: